Blue’s getting back in shape 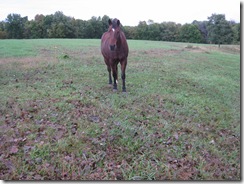 In a recent post, I addressed the fact that I haven’t ridden my horse much this summer, and I announced my intention of riding him every day, weather permitting, to get him back in shape. For some reason, horseback riding is an activity that causes my knee pain to increase, but I figured a half-hour a day wouldn’t kill me; I was sure I could handle that much.

I’ve stuck to my decision of riding daily by treating it like a chore, something that must be done. For the most part, I’m exercising him in our pasture; since he isn’t shod, his feet aren’t handling the gravel well. I’m thinking of having shoes put on him again, at least for this fall. But you know, since I’m not able to ride long, I’m probably just as well off riding right here at home where shoes aren’t needed.

As you can imagine, Blue was very much out of shape when I started riding him again. When I took him up the steep slopes in back, I allowed him to stop and rest, sometimes as much as three times while ascending one hill. Hey, I’ve walked up those hills, and I need at least that many rest stops. And I don’t have somebody on my back!

I want that half-hour of exercise Blue gets to be fairly intense; so he’s been soaked with sweat when we’re done, and breathing pretty hard, even though I slow down and let him poke along the last five minutes or so.

There’s no change in his appearance… nothing ever affects his big ole fat neck, even keeping him on dry lot… but I noticed last night that he only stopped once to rest while climbing the hill; and he wasn’t breathing hard when we finished for the evening.

Blue is such a chow hound and couch potato, I can’t just put him out to pasture and leave him, or that’s what I’d do.

If there were some way of knowing he’d be treated properly, I’d sell him. I’d even give him away under such conditions. But 90% of horse owners wouldn’t take care of him properly; and I’m not going to take anybody’s word for it.

As it is, I’d sooner put him down than take the risk of some new owner turning him out to founder.