A note from my husband

Last night my husband and I were conversing.  I don't know what led up to the point when he said, "You're amazing."  I don't even know what the conversation was about.  I thought maybe he was kidding around with me, and said something like, "Yeah, right."

"You really are," he responded.

The conversation faded away and I thought no more about it.  This morning I piddled around in the garden for awhile in the early hours; when I came inside at 6:30, Cliff was already up, sitting in his spot on the couch, sipping coffee.

"Well, you're up early this morning," I said.

"I had some things on my mind, so I got up to take care of them," he told me.  "Last night you wanted to know why I thought you were amazing; so although I don't often buy you cards or make a fuss about Valentine's Day and all that, I made a list for you."

And he handed me a page out of the little spiral notepad he always carries around in a pocket in the bib of his overalls to write lists, phone numbers, and dates on.  I decided to share this with my readers. 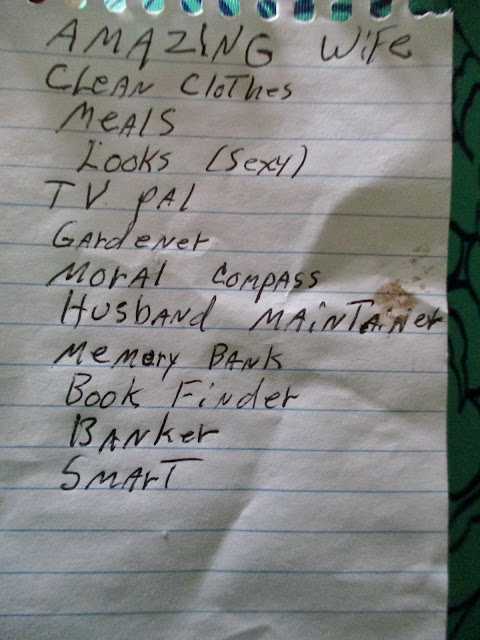 I believe this beats any Hallmark card in existence.

He's always said I don't believe him when he tells me I'm pretty, or sexy.  What he doesn't understand it that I do believe that's how he sees me; I've just never seen myself that way, never have.

I guess I'll keep him around.

Oh how I love these mornings

I've been rescuing my old Iris plants for two years.  I had many beautiful varieties in front of the house, but they pretty well got taken over by grass and weeds.  I moved some of them to the back, where the same thing happened gradually.  Cliff hated mowing around them, and besides, the grass was so thick within the bed that the flowers weren't happy.  Finally I told him to just go ahead and mow them.

Year before last I decided to start moving the tiny Iris spears that showed up every year in the yard, only to be mowed again.  They never give up, even though they never get to bloom.  I moved them along the inside of the fence nearest to my garden.  I had no idea what color each one was; I didn't even remember what colors were in each location.  Only one or two bloomed last year, but they are coming around now.  White ones, pinks, lavender, and purple.  One is about to open up that I've been hoping to see:  a black Iris!  I do hope I'm right about that.  Now if only a yellow would show up, my joy would be complete. 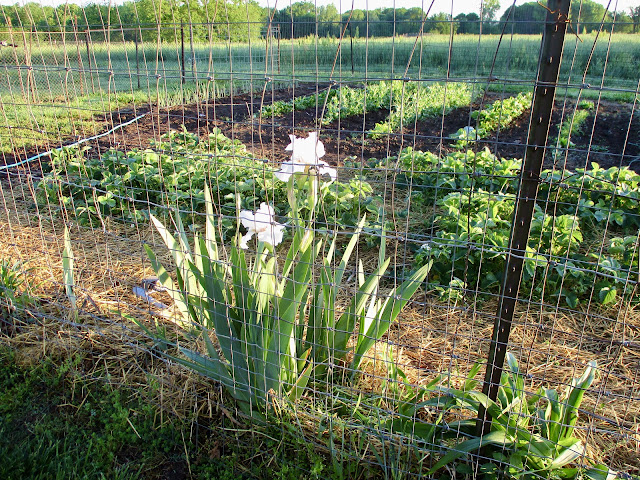 I've had some failures in the garden this year, mainly with corn.  I planted the seeds too early twice, hoping to beat the odds.  Most of them didn't even sprout.  When the frost was over, I made sure to use this year's seeds; I planted again, two half-rows side by side.  Again, only a few showed above ground, and this time the temperatures were right.  The other two halves of those rows were planted in green beans.  Half of the ones on one side didn't come up well, but the others are perfect.  I think what's happening now is the mole population: they don't care where they make their underground highways, and yesterday I found they had even gone burrowing right below my eleven sweet potatoes!  Cliff wanted to put grub killer on the garden, but I don't think I need that where I'm growing food for us to eat.

As for the corn, I decided to plant some in hills where I had tilled the spinach under, since it started  going to seed this week.  You make circles two-and-a-half wide with one yard between them and plant nine seeds in each hill (it really doesn't have to be a literal hill).  This is the best method for small gardens, because if corn is planted in rows, you need more that 1 row for good pollination.  Just thin the little plants to five or six per circle so they are up-close and personal. for pollination  One hill would probably make a meal of corn-on-the-cob for a family.  I'll let you know how it works for me.  HERE'S where I got my information.

I am getting more excitement out of my flowers and vegetables than I've had for years, maybe even more excitement than when we had our motorcycle.  Every day there's something new to see, and I can't wait until the sun comes up to check things out.  I still have some daylilies I'll be watching for blooms, and the gladiolas will come later on.  Tiny sprouts are just now appearing on the Hibiscus, my very favorite flower; it blooms all summer as long as it gets enough water.

Oh yes, and I have a favorite tomato plant:  It's a Big Beef that's 18 inches tall, the biggest and heartiest of the five plants I've purchased, and it has six blooms already. I took off the small blooms that first came on, but now I'm leaving them.  I actually sit in a chair and look at it sometimes.  I also have a Supersonic, two Jet Stars, and a Big Boy, which used to be a favorite of mine. 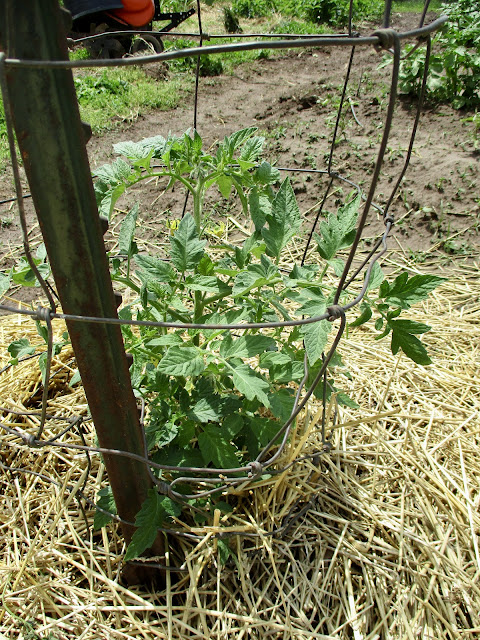 I'm sorry all I have to talk about is my garden, but it's my main activity right now.  I'm still reading, but am not really finding anything to read that I'm thrilled about.