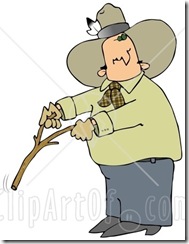 I was over at Dairy Daze a few minutes ago; she mentioned water witching, which brought to mind a true story of which Cliff is the star.

We had some wonderful neighbors when we lived on our twenty acres south of Oak Grove; they were native Oklahomans, and as folksy and old-time country as they come.  They were full of good advice on gardening, canning, milking cows, and other rural skills, although they did have some ideas that we considered to be old wives’ tales.

Mr. Jackson was outside visiting with Cliff one time, and somehow the conversation turned to water-witching.  Cliff, I believe, expressed his disbelief.  I can’t be sure how it all happened, since I was inside with my babies.

Mr. Jackson walked over to a young fruit tree and trimmed off a wish-bone shaped stick like the one in the above picture with his pocket knife.  Since they were in the vicinity of our well, he showed Cliff how to hold the stick and sent him walking back and forth near the well.

After Mr. Jackson left and Cliff came inside, he told me about the adventure; he said that stick literally bent toward the ground, and there was nothing he could do to make it stop.

He still says that was as near to a religious experience as anything that’s ever happened to him.