It’s so funny how it works on Facebook: You “friend” someone from your past and happen to notice one of their friends is someone else from the past, one of those “I wonder what happened to her” people.

Looking at a former co-worker’s profile yesterday, I saw she had recently added a Jessica to her friend list, and I recognized the name: she was one of the most interesting, fun people I worked with at Kohl’s distribution center... a woman about the age of my daughter who loved to tell stories about her past; and you know how I love stories. I told her a few of my own. We were both pretty hard workers, but not so much when we were working side-by-side; we were too busy telling stories to one another!

Back then, I was trying to write a poem every day, sort of an exercise to keep me creative, I guess. Sometimes I’d rhyme about people or events at work, and one day Jessica informed me she wanted me to write a poem about her. I ended up making it a song. If you read it as a poem, it’s hard to get the rhythm right, but take my word for it: it works fine as a mediocre song. Here are the words.

Hers was the friendliest face in the crowd when I began working at Kohl’s.
I was so scared about starting that job, and her smile was a balm to my soul.
She spoke with a delicate Arkansas drawl, with a voice like a ten-year-old girl.
We ended up in the same department, and Jessica brightened my world.

She was born to a couple of hippies one June, In the rock-covered Arkansas hills.
All they possessed were the basics of life, ‘cause they didn’t believe in the frills.
Jessica learned in her growing-up years that life’s best things are not always free,
But these days, the many hard times that beset her are only a grim memory.

I sat down to write her a poem, and somehow my heart heard a song.
So I only had to put pencil to paper; the tune was right there, all along.
If heaven’s a place for the child-like, that’s certainly where she’ll belong.
It was worth my while
To have seen her smile.
That’s why I wrote Jessica’s song. 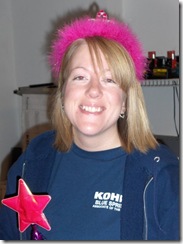 This is Jessica as I remember her.

There’s one other thing that makes her really special: She’s the person who told me where to find a horse like I wanted, a horse gentle enough for an older lady, one my grandchildren could ride: that horse was Blue.