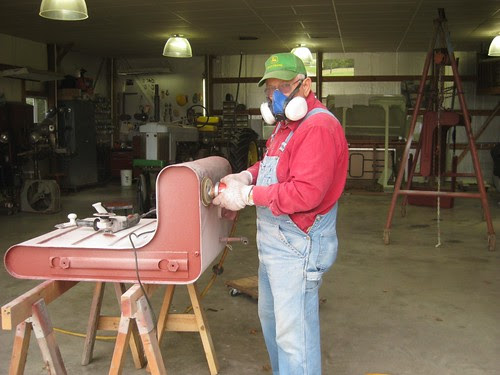 This picture has nothing to do with the entry; I figured my son would like to see what his dad is doing today.

Cliff absolutely loves pancakes, and sometimes when we eat breakfast out, he’ll order them. He’s always disappointed, though; he says they just aren’t like the ones I make at home. Although we don’t need the starch and sugar, not to mention the butter we put on them, I try to fix pancakes for him at least once a month. Sadly, I no longer cook bacon, sausage and eggs to accompany them; I figure why pile on the cholesterol and calories and make a bad thing even worse?

Pancakes are cheap and easy to make. Sometimes I use a pancake mix or Bisquick; many times I make them from scratch. Cliff doesn’t care, he loves any pancake I fix for him.

The problem is, his pancakes often get preempted by waffles. I wouldn’t care if I ever had a pancake, but I have a fondness for waffles that rivals my love for pizza: the time comes when I simply MUST have waffles. Not those fat Belgian ones, either. I like mine thin, light and crispy. And don’t even talk to me about those frozen Eggo things.

The waffle recipe I love isn’t quick and easy like pancakes. I have to get the mixer out and dirty up three bowls and beat egg whites to the stiff-peak stage.

Then I agonize over the time spent waiting for the waffle iron to finish cooking the waffles! Cliff and I each take two sections of the four-section waffle that comes out; we polish those off long before the next one is done. There we sit, waiting patiently, like buzzards praying for the next tasty road-kill.

Now I’ve done it; I’ll be making waffles in the morning.

In mixing bowl, combine flour, baking powder and salt. In another bowl beat egg yolks slightly; beat in milk and oil. Add egg yolk mixture to flour mixture all at once. Stir just till combined but still slightly lumpy.

Pour 1 to 1 1/4 cups batter onto grids of a preheated, lighly greased waffle baker. Close lid quickly; do not open during baking.

Note from me: DO NOT forget to spray the waffle iron with cooking spray, even if it’s non-stick. Otherwise you’ll be scraping pieces of waffle off the grids for an hour.