Several years ago, Cliff and I found ourselves with three grandchildren… all of them out of reach. Our son’s two children were with him and his wife, stationed in Germany. Our daughter had moved 150 miles or so away and was living in south Missouri.

One baby boy saved our sanity. His name was Dakota, but everybody called him Kody. 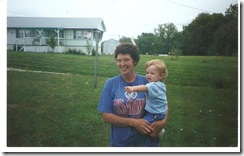 He was six months old when I started babysitting him. I believe he was around two years old when he left us.

He was so cute, and so much fun. He bore on his little shoulders all the weight of how much we missed our grandchildren.

I sang “Eansey-weensie spider” to him, and he did motions with his hands trying to imitate what I was doing, saying, “Pie-dee, Pie-dee”.

He was an active baby. He took short naps, and wasn’t one to sit quietly and watch TV.

He’s sixteen now, and we haven’t really kept in touch with him. I was grocery-shopping recently and the bag-boy spoke to me, calling me by name. It was Kody. My heart melted.

I will always love that boy.

I “friended” his mom on Facebook last week and saw a picture of the baby boy who filled the void when my grandchildren weren’t available. He will never know how much he means to me, even today. 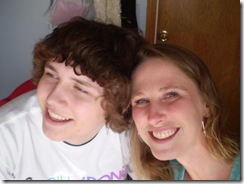 God bless you, Kody. I hope life is kind to you.

Email ThisBlogThis!Share to TwitterShare to FacebookShare to Pinterest
Labels: Kody