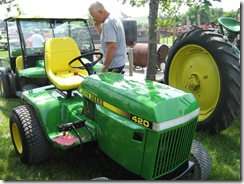 In June of 2007, Cliff and I were strolling through a tractor show when we saw an older John Deere garden tractor for sale. At first the price seemed steep, as I recall. Then Cliff called our son, a John Deere aficionado, and asked him some questions about various models: which ones were more durable, which ones were worth the most, and so on. 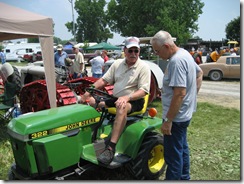 We came upon this fellow riding around the grounds who loved the John Deere 322 model so much that he owned three of them. He sang the praises of his tractors.

We were in need of some sort of riding mower, and when you consider the price of the new “disposable” models at Walmart, one of these older John Deeres seemed like a better buy; these babies were built to last! 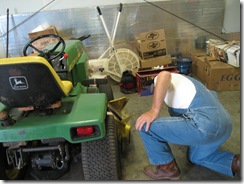 Just a day or so after the tractor show, we saw a 322 for sale in Buckner, just a fifteen-minute drive from home. Cliff looked it over and called our son.

We bought it, and Cliff was ecstatic to have a two-in-one package: Something with which to mow the lawn plus a classic little collectable that he could take to tractor shows if he wanted to. We named the tractor “Little Johnny”.

It came with a blade and wheel weights, which Cliff soon sold on Craigslist because we didn’t need them.

Fast-forward a year: Cliff’s sister and her husband left their farm nearby and moved to St. Louis because that’s where the jobs were. Brother-in-law Pat had a newer John Deere riding mower that he wouldn’t be using, so he brought it here for safe-keeping and Cliff began mowing with it instead of Little Johnny.

Yesterday we put Little Johnny on Craigslist for the same price we paid for it, and I swear to you, two guys would have duked it out over that little tractor if they had shown up at the same time. They wanted it badly! The first guy to show up with cash in hand got the tractor. (This is where you say to yourself, "We should have asked more for it.)

So now Cliff has $2,000 in his tractor fund. By the way, I’m not at all sentimental about Little Johnny. It was a recent addition that held no ties to the past for me. I’m just glad Cliff replenished his tractor fund… he was almost at the point of having to use my weekly grocery allowance to work on "Big Ollie", his 1855 Oliver. Everybody’s happy.

Especially the guy who loaded up the tractor and took it home.