I killed a possum!

If you think opposums are cute little lovable critters, do not read this entry or scroll down to the pictures; but ever since possums wiped out my whole chicken population years ago, I’ve hated them with a passion.

If you’re reading this VIA Facebook, you are missing seeing pictures.

Sadie had already gone to her doggie bed in the bedroom last night when suddenly she started barking desperately, looking out the window nearest her bed. 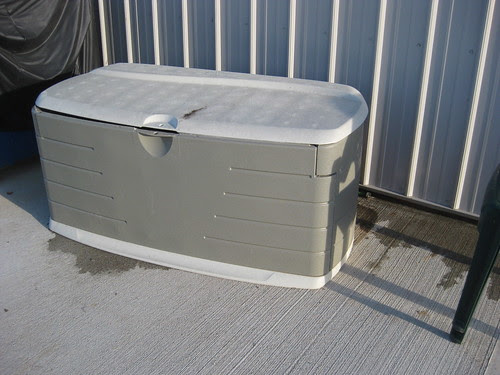 I got a flashlight and let her out, following close behind; she went to the deck box in front of our garage and barked like crazy at the space between the deck box and garage. I shone my light into that space and, lo and behold, a possum. 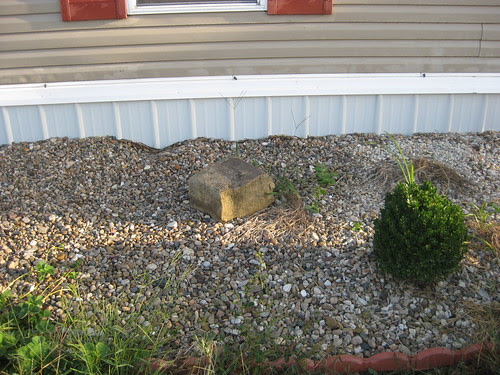 We have big rocks lying in that (weedy) bed of gravel along the house, and I grabbed one and flung it on top of the possum. Then another. Pretty soon the possum was covered with big rocks with nothing but his ugly, growling head sticking out, and I came in and announced my triumph on Facebook. One has to share victories in whatever way is available.

My wise Georgia friend, who has likely had her own struggles with varmints, told me those rocks wouldn’t hold the possum. I called Cliff at work, and he said “get a hammer”. I pointed out that the hammers are way out in the shop, and I was running around in my nightgown with a flashlight.

“Then get a shovel and kill him with that.”

Since the shovels are in the garage near the house, I tried that… one-handed, of course, because I was holding the flashlight in the other hand. Again and again and again, with Sadie going absolutely crazy beside me, I struck at the vile creature. I hate killing anything, even a possum. But I don’t want them taking over my place, either. Who knows, I might want some chickens again sometime.

I saw blood, and the possum stopped growling at Sadie; he was still covered by fifteen-pound rocks. 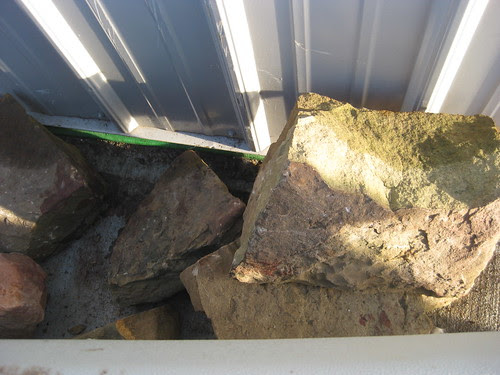 This morning when I went to remove the body, this is all I saw. No possum, only rocks.

I was fairly certain he went off and died someplace, but I sure did want to know for sure. 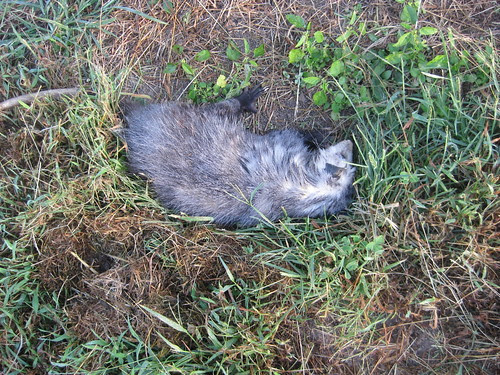 Then I went out to get rid of some trash and I saw this.

If this happens again, I hope I get a cleaner kill.

Celeste had suggested using a gun, but I don’t touch guns; I’m afraid I’d shoot my fool self, or blast holes in something valuable.

If you go to my wall on Facebook, you can see the whole possum conversation.

Email ThisBlogThis!Share to TwitterShare to FacebookShare to Pinterest
Labels: Possum

The Guy Who Writes This said...

Wow, you are a pioneer woman!

Good job. I hate those things. They will climb trees and get the chickens too. I have a skunk problem too. Now that is a hard one to get. I know I will get sprayed!

Well I guess you showed him/her.

I am waiting for comments like "that's good eatin'!"

I don't like possums either especially when they come into the kitchen through the doggie door to eat dog food. Helen

You are a brave soul. This must be possom time as I just saw an entry about some one trapping one and removing it to the country. They didn't kill it but took it some where far away. They are quite mean creatures from what I've heard. I cannot imagine being able to do what you did. Be careful!

I hate em too. They are mean! My mom shot at one on our back porch and missed and the bullet just hit the concrete. It's lucky it didn't ricochet back on her! I hid her gun after that. One got in my dog house and scared my big dog! I lifted off the roof and tried to sweep it out with a broom and it came after me! Found out I could run faster!

Wow, what a way to spend a night! When I lived in the Ozarks I was plagued with possoms - so I know exactly what you mean.Haven't seen too many here in Texas, thank goodness.

I happen to like possums, but I understand why you felt you needed to kill it. Raccoons wiped out my chickens and I feel much the same way about them but I don't see any point in killing them now. Your story did remind me of the time I ended up beating a pack rat to death with an axe handle that was trapped in trash can.

well I am sure it wasn't a nice thing to have to do...but the story was sure a "rib tickler" LOLOL...I read it three times and laughed my fool head off...sure hope none of the "neighbors???" were up and about....LOL...oh Donna....this is the best of the best "possum" stories...sometime back I put an entry in my blog about the little possum we found in our yard...and I took pictures...everyone thought it was so ugly it was cute LOLOL...and now I find out I should have clubbed it to death instead of taking pictures and ooooing and ahhhing over it LOL...sure can tell who is the country girl and the city girl LOLOLOLOL...ROFL....hugs...Ora..the city girl!!!!!!

We used to have possums in our back yard at the Florida house. I fed 'em cat food.

Soo....you don't want me to tell them to visit their Missouri cousins?

eeeeeshhhh.....
Hubby G has had possum issues...and it was birthing babies on the back porch while he was trying to kill him. eeeewwwww.

Wow. I think it is tough to have to kill any wild thing.

Wonder if there is a pest-buster-sure-way to deter the likes from coming close to human dwellings so that you will not have to do it yourself.

Poor opossum probably didn't realize he was a pest. Probably thought he was just another animal, like you, me, dogs, worms, trying to exist on its own property which we co-opted. Kind of a crap shoot lol. So you hate guns, but are anxious to kill another animal because to you it's a pest - I sympathize, I don't know what I'd do..o wait, yes I do: find a more humane way of capturing and releasing the opossum because after all, we're in it's habitat, we're on its domain, we've built and expanded into other animals' homes. So why are THEY the pests? Yes I know it's a vagary of life yet I'd hate to imagine what other life forms think of us humans - pests? You bet, we pester this poor planet with our garbage and gases. So it's a matter of perspective I suppose. I wonder how a higher life form would get rid of US pests? That shovel doesn't sound very inviting.

Oh, almost forgot: Didn't you just say "I don't have the nerve to kill anything" over at my place? Thank you for vising btw. So which is it? You're a "wimp" at killing, you say, yet celebrate this particular kill. I'm confused lol Donna I'm not assigning judgment on you, it applies to ALL us humans. We're kind of complex, yes? We cherish life but make exceptions for the sake of our comfort. Confusing creatures, we humans!

Our boston terrier, Xena, would tree possums for Pete to kill. They will wreak havoc with the chickens. I haven't done war with a possum...but I did shoot an armadillo in the middle of the night with a shotgun in a silk tap pant PJ set.

To Cathy: Thanks for the polite way you said your piece. Usually I do make my husband do my killing, but he was at work. Hey, I love my cattle and I loved the pigs we raised. That didn't stop us from killing them and eating them. It's what they were here for.

I hope you're a vegetarian, since you value all life forms so much.

Poor possum!! I used to have so many of those things and I caught about 9 and took them way out in the country and turned them loose. I just cornered them and had a glove on and got them by the tail and put them in a big trash can with a lid (metal can). If you get a possum by the tail you hold him way out away from you so he can't grab you. They have some nasty looking teeth! I did shoot one. It was the biggest possum I'd ever seen and I never could catch that one. That thing was HUGE!!

i just wacked out a skunk and a opossum tonight with a high powered pellet gun ..the skunk did not even spray..the opossum took two shots..funny the first shot wounded it badly but it didnt play dead so i put another pellet in the brain..in my case i have a small yard and a cat and dog that play in the yard ..many times ive come face to face with a skunk in my own yard..cathy as far as us co occupying their territiry i diagree untill the help with my bank note they are tresspassing

I hate possums coz they are so creepy! They can just stand there and look at me! They are tough to kill. I used a wooden sword punched a possum 5 times it still walked away slowly like nothing happened, and they walk across my roof and create a lot of noises.

Possum have. Been nothing but trouble around here. I need to get rid of mine. They think its ok to play on my roof. Come up to my doors, llike they are planning. On ringing the door bell. Except they hiss. They try to get into my trash. And i think they have killed some kitty cats