In the past, I’ve had horses that chased cows unmercifully, running them into ditches and fences, chasing them into total exhaustion. Horses don’t behave this way out of meanness; they’re just having fun doing what horses do. It’s a game. The trouble is that horses are fast, agile, and graceful. Cows are clumsy and slow. So we know who wins at this game.

For a several years, Cliff and I had electric fence strung up to keep the horses and cows separate. Last year we decided to try letting them roam together, while keeping a close eye on them.

At first the horses did chase the cows quite a bit, and the cows learned to graze in different areas of the pasture; never, though, did the horses pursue them relentlessly like I’d seen some do in the past. They’d just lay their ears back and run the cows off to perhaps fifty feet away from them, then go back to grazing. 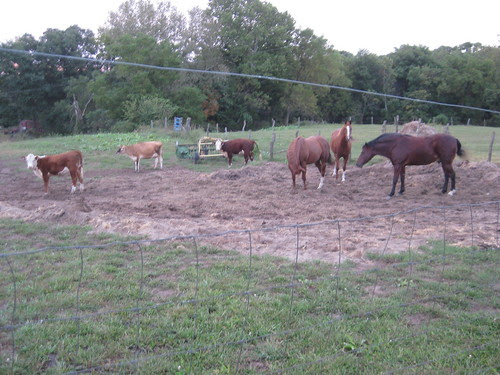 As time went by, the misbehavior became rare, and now they can all be seen grazing in the same area of the pasture together. 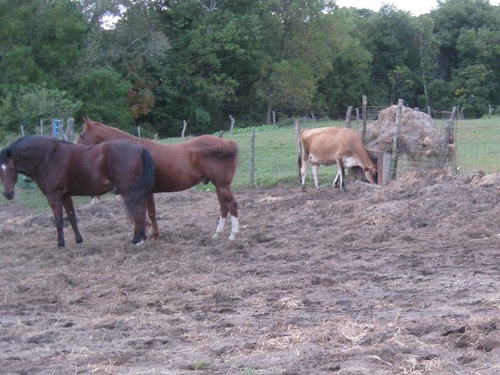 Bonnie’s seen here getting a drink. I had her calf put up overnight so I could milk this morning, and she probably spent the whole night in the lot outside the barn near her calf, away from water. Here’s one convenience I have that Pioneer Woman’s family does not: The in-ground waterer, which never freezes. I don’t have to chop ice in winter like Marlboro Man does. Of course, I realize it would be impossible to pipe water out to those isolated fields where their hundreds of cattle spend their time. But it does me good to know I have one convenience they don’t have! 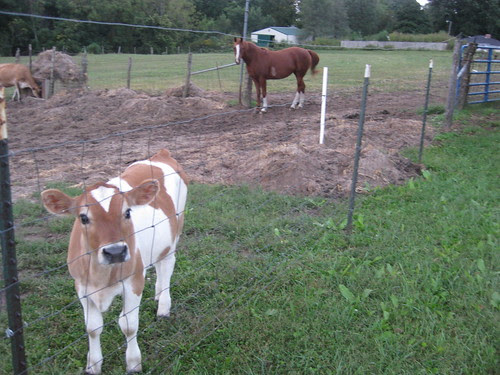 Just before I took this shot of Sir Loin, Sassy (in the background) chased him for a short distance. If there’s going to be any orneriness done by horses, you can bet Sassy will be the culprit. I blame it on her being half Arabian. I know, I know… there are nice, gentle Arabians around. But I had a bad experience with one, and I don’t forget easily. 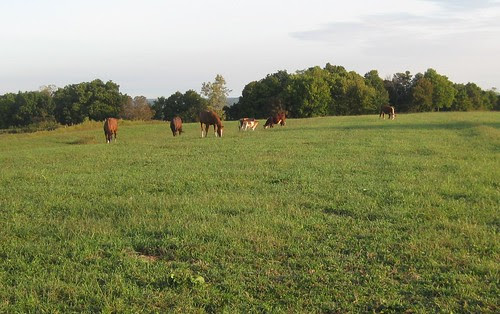 OK, so it isn’t as big a deal as the lion laying down with the lamb. But it sure makes me happy.

Email ThisBlogThis!Share to TwitterShare to FacebookShare to Pinterest
Labels: horses and cows

Sir Loin is such a cutie looking at you with those big brown eyes. It is wonderful they all get along. I guess they know they belong to the same family.

Interesting entry! That's great about the water! Sir Loin is a beauty!

That is great that they mostly get along well. That water is a great feature. Saves a lot of trouble and steps. Helenhotog

I try to make sure I don't get too attached to your animals, but Sir Loin sure does pull at my heartstrings.

I don't know much about horses (my granddaughter does, lol) and didn't know they would chase cattle. John had one named Waco when I met him and I know he isn't fond of having horses around. Maybe that is the reason.

Blue needs some lipo suction on his neck.

He always has, Guy. He was like that when I bought him. He needs exercise, and he sure isn't getting it lately. His founder episode was brief, and once the fast-growing spring grass was done (about two months time), I turned him back out. I watch daily for any signs of limping, but I'm sure he's OK until next spring; then I'll have to keep him up again.

I'm sure he's completely OK under your watchful eye, but just seeing that profile scares the heck out of me.

Again... I don't know about you, but Sir seems to look at you with a curious look. There is something intelligent about him... besides being very cute.

I think his presence in the farm will make you very happy in the coming years.

I'm so far behind. I did not know you had Sir Loin in the mix now. That is such a cute name, and he's cute too! Did Meatloaf become dinner? What about Secret?