Look how Sir Loin has grown 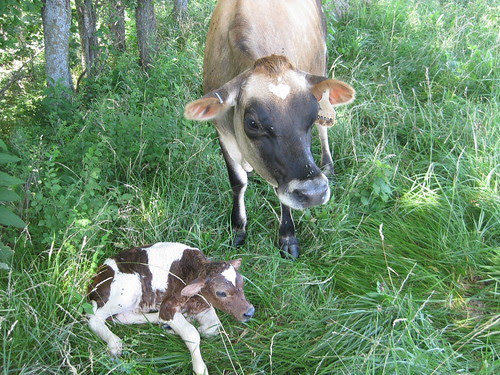 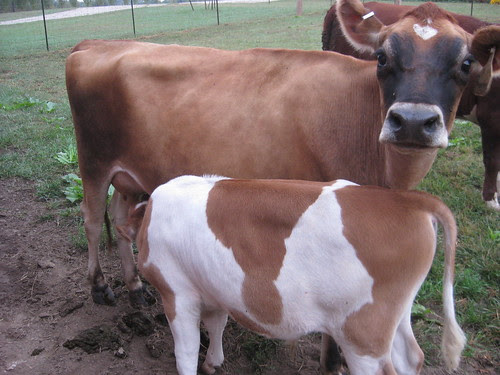 … and this morning, at almost three months old.

Of course, it’s no wonder he's growing; he gets four gallons of milk every day, except for once or twice a week when I put him in the barn so I can steal a gallon.

I had the Artificial Insemination tech here for Bonnie almost six weeks ago. After a cow is serviced, you mark it down on the calendar and watch her closely, three weeks later, for signs of being in heat. We had a very busy weekend on Bonnie’s three-week mark, but I saw no signs. This weekend it will be six weeks, so I’ll watch her (hopefully more closely) again.

I had so much trouble with my last heifer, who turned out to be sterile, that I’m almost afraid to hope Bonnie is bred so soon. Especially since she is a dream cow, probably as perfect in her demeanor and behavior as any Jersey cow I’ve owned. And I’ve owned quite a few.

She’s tame, and loves to be petted and hugged; she stands like a lady to be milked; she’s beautiful; she’s a good mother.

She’s perfect. Which is why I keep waiting for the other shoe to drop.

Assuming she’s bred, I’ll let Sir nurse her until a couple of months before her next calf is due. Then we’ll take him to Cliff’s brother’s place to wean him.

Sometime after Bonnie has her next calf, we’ll bring him back home, let him get to the age of about eighteen months, and have him butchered. Since we don’t intend to try and fatten him, we’ll have most of the meat put in ground beef, as we did our last steer.

He is beautiful and so is she.
It is amazing how fast he has grown.
Thanks for the update and the pics.

Wow- He has grown! I hope everything works out with Bonnie