Project 2,996 gave me his name to bring before my readers on this eighth anniversary of the tragedy that happened on September 11, 2001. I’m glad to be able to share a few things I’ve learned about him from the Internet.

Derek left behind his wife, Kimberly, a son, Tyler, who was a year old when he lost his father, and a then-unborn son due the following January.

He lived in Norwalk, Connecticut, and worked with the research department of Keefe, Bruyette & Woods, located in the south tower; this was in the impact zone struck by one of the planes. All he did was go to work that morning, like most all of us do.

He was thirty years old. But what we want to dwell on today is not how he died, but how he lived.

I especially enjoyed this story about him:

‘For one thing, he did not like dog hair everywhere,’ said his wife, Kimberley Young Statkevicus. When she finally persuaded him that she needed a pet, he decided on a basset hound because he thought it would look goofy and just sit around (she wanted something more high-energy, like a retriever).

Then came Squirt: half basset, half yellow Lab, very cute (and house-trained to boot). ‘He totally fell in love with that dog,’ Mrs. Statkevicus said, "even to having her on the bed!"

Though he commuted an hour and a half each way from Norwalk, Conn., to his job as an equity analyst at Keefe, Bruyette & Woods, Mrs. Statkevicus said, ‘Derek would take her on walks, play ball with her, give her baths and stuff.'

And a good thing, too, because Tyler, their son, was born in August 2000, a year after Squirt arrived, and another baby is due in January. (Mr. Statkevicus, 30, loved being a father.)

These days, Squirt gets her exercise in the backyard, sometimes with Tyler, who loves to climb on her. In addition to adoring Squirt, Tyler takes after his father in other ways, Mrs. Statkevicus said: ‘He's very active, very smart.’”

Other things people had to say about him:

“He played with a tenacity on the court and was a practical jokester off the court.”

“Derek and I were roommates at Ithaca College during our freshman and sophomore years. At the time, his ambition in life was to drive a BMW and "rule the world." Although he dressed like a yuppie, Derek loved house and rap music and used to blast Public Enemy and 2 Live Crew from our dorm room. Above all, Derek was good natured, fun to be around, and a good friend. He is truly missed.”

“Derek was a great guy, always positive and ever imaginative.”

"I lived upstairs from Derek when he was a senior at Ithaca College. I met him and his roommate, Paul, while I was moving into my apartment. I bribed them both with pizza and beer to help me move in. Once they had all my stuff upstairs, I told them I couldn't by them beer because I was under age but I bought them pizza instead. From that moment on, Derek always said hello to me and was always smiling. Or studying. I believe he even helped me study for a test or two that year. (he was the T/A for a class I was taking)."

"Derek and I worked together several years ago at J.P. Morgan. We enjoyed his youthful spirit, bouyant personality and intellectual curiosity. He always had a smile and chuckle handy for the right moment."

"He always had a way of bringing joy and laughter into the most mundane of conversations." 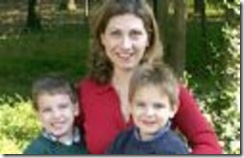 I was able to find a picture of Derek’s wife and sons. Not very big, not very clear… but it’s something!

Thanks to Project 2,996 for giving me the opportunity to participate in this endeaver.