Warning: This entry is about Cliff’s passion, the old 1855 Oliver he hopes to restore. City-dwellers, especially ladies, may want to skip this entirely.

Back when Ollie was new, she was one of the bigger tractors to be found, so full-time farmers were the ones who bought the 1855… and the even bigger 1955 and 2255. One option with that line was fuel-tank fenders: You’d fill up the regular tank plus the two fuel-tanks in the fenders, and you didn’t have to return to the barn so often to refuel, when you were out working the fields.

Very practical, for farmers who had huge acreages. Cliff, however, only wanted them because he thinks they make the tractor look better than the regular fenders. 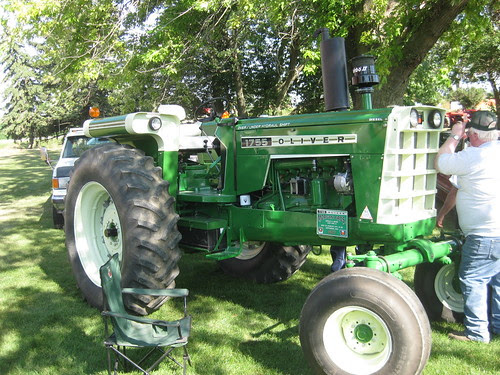 Ever since he saw that perfectly restored 1755 Oliver (pictured here) at an Iowa tractor show, he’s dreamed of getting his Ollie looking like that. And that tractor had those special fenders.

Yesterday we went to Clinton to pick up those fenders Cliff spotted Saturday; they were ready and waiting, but as the fellow started to load them, he said, “The ones in back that were already off the tractor are in better shape than these.”

He offered to take Cliff to see them, and Cliff agreed they were superior to the others. Those are the ones we came home with.

As it happens, they came off an 1850, rather than an 1855. So there are two lights in each of the fenders instead of one. For a purist, they wouldn’t do. But for my husband, who thinks two lights look better than one anyhow, they’re just right. 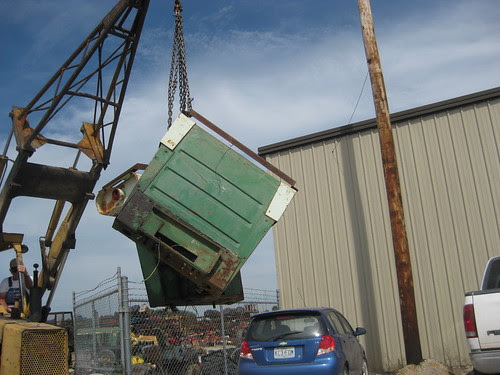 Somebody welded ugly angle-iron on top of these, so those will have to be removed.

And that’s the story of the fuel-tank fenders.

We're still here in Texas but I have been checking out some of my favorite blogs on the Hubs laptop. Can't get used to this thing. Read all your posts and now am craving macaroni and tomatoes! Will be my first meal when I get home with a nice cold glass of milk.

I've ordered Ree's cookbook, but she won't be coming way up my way.

I actually love old tractors and would love to restore one some day...in my spare time ;)
Right now my husband is into restoring other old things (bikes & snowmobiles) but I'm sure the day he says he wants a tractor isn't too far off. That's a beauty in the picture.

Yea! Glad Cliff got the fenders.