Remember last spring when I so proudly showed pictures of my flowers and my garden? Things aren’t so pretty now. 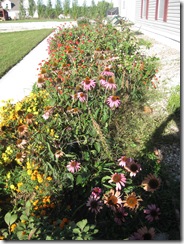 Flowers are faded; I didn’t “deadhead” the coneflowers because I’ve read that finches will eat the seeds; in fact, I’ve seen them doing it. They’re still away raising their families, but I’ve been assured they will be back to spend the winter. I still have the occasional hummingbird at the feeders, but not often; mostly in the mornings. 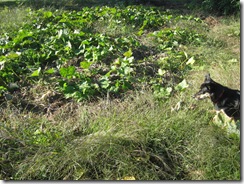 The oh-so-prolific butternut squash vines are dying amid the ever-present crabgrass, and a few of the squashes have rotted. Don’t worry, I still have plenty for our consumption. 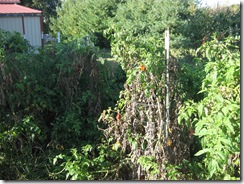 The tomato vines are riddled with blight, although I can still go to the garden and find a few tomatoes for a salad. 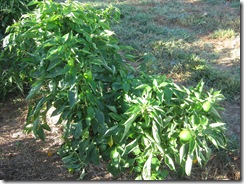 The sweet peppers are outdoing themselves, producing more now than they have all summer. 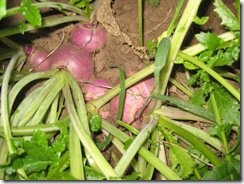 Turnips are doing well, although I won’t harvest all of them until the twenty-first of October (drunk or sober, as the saying goes). 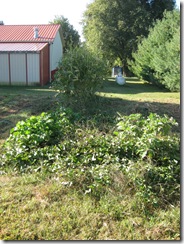 I planted one sweet potato cutting, remember? This mess is mostly sweet potato vine from that one little plant. It’s invaded the turnips (on the left) and my single eggplant (on the right). I’ve been warned to dig up the sweet potato before frost. I’ve had half a notion to go ahead with it; as cool as it’s been, we could get frost very soon. I wonder just how much larger the sweet potatoes could possibly get in two weeks.

Oh, those tall things in the background? Okra, which we’re still enjoying.

I figured that since you saw my garden at its best, you should also see it at its worst.

You can get lots of good things from a garden, even an imperfect one that's past its prime. I suppose you could say the same for a person.

Thanks for the ***BIG SMILE*** this afternoon...I love your anology of people and autumn gardens...still laughing.

My chili pepper and red bell peppers are going like gang busters right now and my 1 cucumber suddenly has 8 little cucs on it! I've stopped watering my tomaotes mostly and there are a few left.