Considering that cattle aren’t the most intelligent animals on the planet, the calf, Sir Loin, never ceases to amaze me. 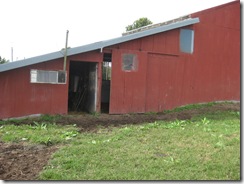 In the evening when I’m planning to milk the next morning, I remove him from his mother by driving him through the sliding door on the right, into the horse stall. Even though I only milk once or twice a week, Sir knows what I’m doing, and after a little bucking and cavorting, he’ll run right in there.

Next morning, Bonnie is usually right there by the barn, knowing her son is inside. She and the calf usually start mooing at one another around 6 A.M., and I get out there quickly so they don’t wake Cliff up. The barn is right in front of our house, you know.

Bonnie goes in the open door on the left, and right to her stanchion; I lock her in it so she can’t leave when her sweet feed is gone, clean her udder, and milk as much as she’ll give me, which is less than a half-gallon. In order to get all the milk in the two teats on my side, I have to let the calf in and get him nursing on her left side so she’ll go ahead and let her milk down.

I prop open the door to where I’m milking, slide open the stall door for the calf, and Little Sir comes right on over.

If I milked twice a day like dairy farmers, I wouldn’t be so surprised at how well Sir knows what he’s supposed to do; but milking only once or twice a week, I wouldn’t have expected him to figure it out. 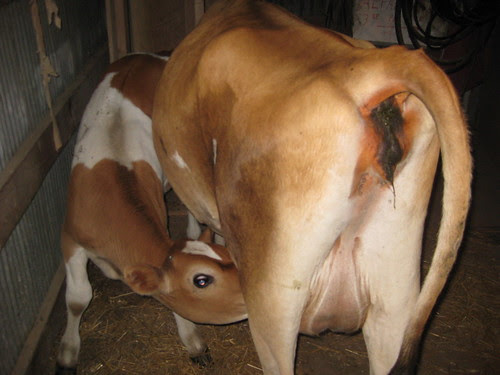 There isn’t much space between the cow and the wall (sorry about showing you Bonnie’s hiney like that). When Sir was smaller, it was no problem to wrestle him around and back him in there; now that he’s big, I’d never get it done if he didn’t cooperate. He hasn’t figured out how to use reverse, but he comes in the barn, stands in place behind his mom, and waits for me to guide him backwards into that small space. One he’s in position, I go back to my side of the cow and finish milking.

Lately, his body is almost too long to be in there and still reach the teats. 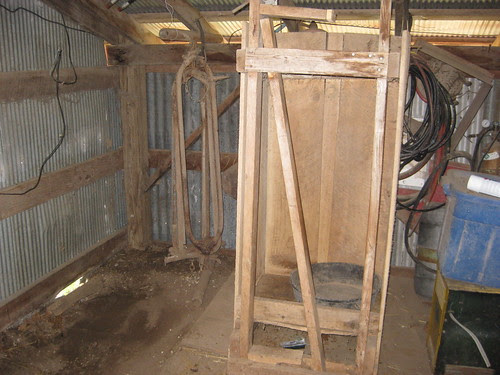 So today, Cliff moved the stanchion over, leaving plenty of space for the calf. No more pushing him backward into that small space.

My blogging buddy Amy said, in a comment, “I try to make sure I don't get too attached to your animals, but Sir Loin sure does pull at my heartstrings.”

Mine too, Amy. If only he had been a heifer! I do intend to enjoy him every day I have him here. Nevertheless, he is bound for the freezer eventually; I’ll be considerate and not blog about it when that day comes.

Let’s hope next years calf is a girl.

I agree with Amy! It's sooo hard to not get attached especially to that sweet little face, but I understand totally

He is just to smart and to cute. Looks as if he is looking right up at you at you. Helen

What an enterprising young man to have figured all that out, especially considering -- like you said -- that bovines aren't the most intelligent animals on earth. He sure is a "keeper" like Dear Hubby says of anything/body that's extra cute...but I don't think being kept is in his future, huh? Oh well.

I hope Bonnie's next calf has the same coloring as Sir. I like that mix on him. Is it only the Jerseys that have that pretty soft sheen to them?!

You will never know, Sir might just make you love him like a pet does with his antics and intelligence.

You will then not have the heart to slaughter an intelligent and endearing pet, much less eat it, will you?

I love the pictures of Sir Loin. I would keep him. There is no way I could eat a bite of meat after seeing that sweet face, and those big eyes.