Wow, did I actually go a whole day without blogging?

We're in a celebratory mood: I've been cooking and we've all been eating. We're enjoying having Cliff's youngest sister, her husband, and their dog with us. Cliff's other sister, Rena, is back from Wisconsin where she had her latest day in court with her ex. Last year she wasn't too happy with her lawyer; today she's proud that she didn't switch horses in midstream, because he earned his keep this time.
One of my readers, Vicki, left a comment saying she had an egg beater she hadn't used in the thirty years she's had it, so she's sending it to me. Merry Christmas to me, eh? My readers rock! I have to be careful what I mention here; last year I was mourning the fact that nobody has bubble lights any more, and a reader from Texas sent me some. I'm enjoying them thoroughly this year.
Have I told you that I always wanted a new Cadillac? 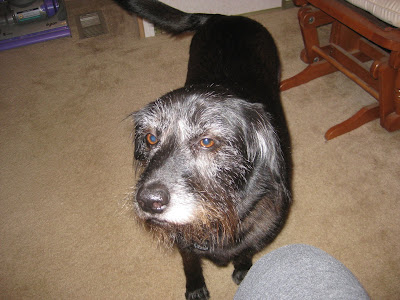 Cliff's youngest sister and her husband, Pat, mentioned to us that their dog, Mindy, has suddenly started getting on their bed, and she's never been allowed on any furniture. You'd have to meet Mindy to know that she is one of the most well-behaved canines you'll ever see. She obeys all commands. Pat can walk her in their St. Louis neighborhood without a leash and she never leaves his side, even when other dogs pass by. 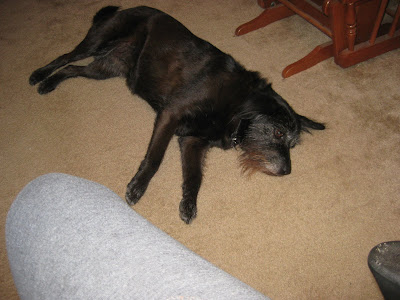 They left Mindy here yesterday while they went to Pat's family Christmas get-together, and during a rowdy playtime with Sadie, she ran and jumped on my bed with her ball. I chided her and she jumped down, but I puzzled over this latest turn of events. What would cause such a change in the behavior of a dog who has been so nearly perfect for three years?
The light bulb turned on, and instantly I knew what had happened: The last time Pat and Charlene rode here on their motorcycle, they left their pet with an elderly neighbor who loves Mindy dearly, and has the most spoiled little lap dog you've ever seen. I could picture with my mind's eye the sweet little woman's brat-dog jumping on the bed with her at night as he's accustomed to doing, and the lady looking down at poor Mindy thinking it just isn't fair that she has to sleep in her bed alone on the floor. I visualize dear Miriam patting the bed, enticing Mindy up to join her.
When I laid out this scenario for Pat and Charlene, they agreed that had to have been what started this recent behavior. So now they're going to have to work at ridding Mindy of this unwanted behavior.
I have a slight issue with my cow, Bonnie: her calf, being at least half her size, is none too gentle when he nurses her, and he has her two front teats so sore that she kicks him away. It doesn't help that his belly is likely full from the tall grass Cliff turned them onto. This puts me in a position of doing something I had not counted on... milking every day. She isn't too "kicky" with me because I apply udder balm to the scabby places, and once it's worked into her udder, her pain stops. Hopefully this will pass. I've put Sir Loin up today, hoping he'll be hungry enough tonight to take all her milk... even if I have to put her in the stanchion and put a "kicker" on her so she can't shove him away.
It's always something with these pets, isn't it? 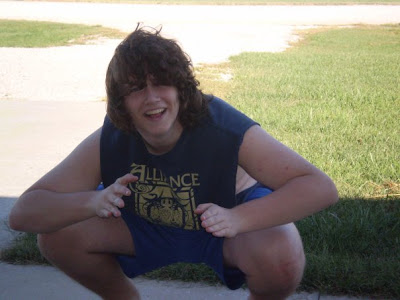 The local boy who recently had a wreck on slick roads, Kody, has to lie on his belly in the hospital for seven to ten days while skin grafts take hold. What an ordeal for a sixteen-year-old boy to face, and with pain from a broken pelvis, too! It's not exactly a merry Christmas for him. Even though Cliff and I barely know him now, we refer to him as "our Kody" because of the couple of years we babysat him as an infant. 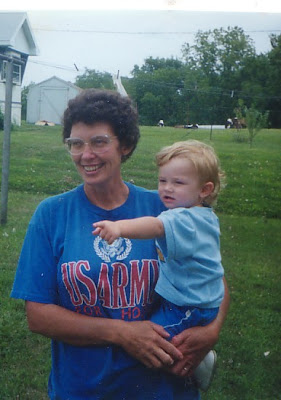 He was a lifesaver for us at the time, because our son was in Germany, our daughter and her family were some distance away, and we didn't get to see our grandbabies much. We poured all the love we had for our grandchildren into Kody, and he soaked it up like a sponge. He was one of the best, most timely blessings ever sent our way.
I know he and his family would appreciate prayers for him, and I would too.
Posted by Donna. W at 5:12 AM

I think I have a spare Cadillac sitting here and I am not using it at all. I think I will drop it off on our way from St.Louis. :-)

Praying for Cody. (The ICU and CCU waiting rooms are full of families as I type this....illness and accidents knows no holidays. Remembering all of them in prayer.)

Oh I hope Kody is better soon. Bless his heart. I worry so much about our teens!
I will say a special prayer just for him this morning!

One more Cadillac coming right up. You should get it in a few days. We have so many of those we won't miss one of them LOL.
Mindy is a cute dog.
Sir Lion is just going to have to quit biting his mom's source of milk. I don't blame her I would kick also.
Sending up prayers for Cody.
Merry Christmas to you. I think an egg beater is a good Christmas present. By the way I used my old one this morning on breakfast eggs.
Helen

I know about transferred love. My younger daughter and her best friend had their babies about the same time, except my daughter was in England. Nila's babies were the ones I got to hold two times while Stacies were so far away. Now I love them all and I am all their Nana's.

Just how many Cadilacs can a girl have...if there are any left over you can send one my way. I always loved the PINK ones myself. Your Kody will certainly be in my prayrs. May the dear Lord bless him with a speedy and complete recovery...I always pray thy will be done Lord. Glad you have had such a great weekend. Me too! I loved every minute of yesterday and am doing nothing here but relaxing the rest of the day!

Is that the young'un that you came across in the grocery store that you had not seen since he was a baby? I hope he will be OK.

Yes Marlene, that's the one. I'm sure he WILL be OK, but he is sure going to have some discomfort for awhile.

I just talked about our stray "adopted" cat not climbing or scratching our furniture, and here is Mindy just like our cat, Alola.

My thoughts are with Kody. Hope he recovers fast and well. It is indeed tough on him to have met with an accident.