Something I've noticed at the grocery store

No, not these two pictures; I'm just putting in a couple of pictures I found when I was scanning old photos last weekend; they were taken sometime between 1977 and 1980. The "something I've noticed" is below them. 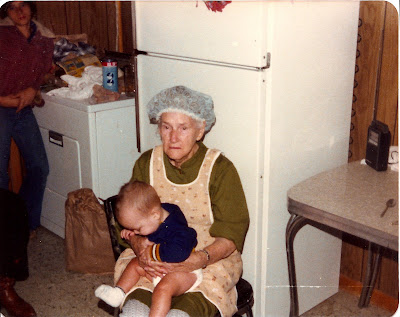 This is Cliff's paternal grandmother. I don't know whose baby she's holding, and I don't know who the guy in the background is. Granny was living with her daughter, Cliff's Aunt Margaret, at this time; the picture below was taken the same day. 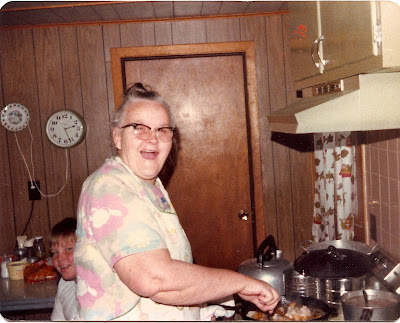 I absolutely LOVE this shot of Aunt Margaret, cooking a meal (notice the cast iron skillet). When Cliff and I were first married, she and her husband lived in Kansas City; we'd go by and see them once in a while to show off our babies. Cliff still talks about Aunt Margaret's cooking, canning and preserving. I often make mention of Cliff's cousin, Edna; Aunt Margaret is Edna's mother. Edna and I weren't really acquainted that well until the Internet brought us together. She emails me some great jokes and stories, many of which I share with my readers... for instance, the video of Tennessee Ernie Ford.
And now, a rant about groceries.
I don't think it's my imagination that grocery stores are stocking less variety these days; I assume they're doing it to cut costs.
Case in point: I've always purchased R.B. Rice Italian sausage for my spaghetti sauce; I discovered it when Cliff worked for R.B. Rice, back before they moved to Tennessee. It's very low-fat, and the flavor is the best.
I do most of my grocery shopping at Walmart, but I've seen this happening in some other stores too: If I want Italian sausage these days, Jimmy Dean is all they're stocking. There's plenty of Rice breakfast sausage in the cases, but no Italian, in many stores.
That's just one example. Evidently the stores are keeping their inventory lower than they once did. I used to buy no-salt canned tomatoes at Walmart; it's a good thing I had a garden last summer and canned my own, because that's something else that seems to have disappeared off the shelves.
While we're on the subject of groceries, I've noticed you really have to watch the store brand items, and this applies to Aldi's too, although I seldom go there: tuna might seem like a good buy at first glance, but check the ounces; often the can is one ounce lighter than the name brands.
Sugar is confusing; sometimes it's sold in four-pound bags, sometimes five. For those of us who do comparison shopping, it will keep us on our toes.
Coffee used to come on one-pound amounts. That shrunk to thirteen ounces, years ago, even though you'll still hear people call it a pound.
I staged my own boycott on bananas for a month or two when the price rose to sixty-nine cents a pound. The very week when I decided to pay the price and start buying them again no matter how much they cost, that price fell to thirty-nine cents a pound, and that's where it's stayed for quite a while now. You can be sure it had nothing to do with my one-woman boycott.
Store brand rolled oats were ninety-nine cents, three years ago. Now they're $2.39.
Oh well; I suppose we'll be fine if we make it through December.
Posted by Donna. W at 8:10 AM

Email ThisBlogThis!Share to TwitterShare to FacebookShare to Pinterest
Labels: groceries

The grocery thing annoys me as well...

I've noticed the same. The tuna vendors are especially sneaky. I've bought a view cans lately that were filled with lots of watery tuna mush.

Packaging has really changed. They keep trying to make us think we are getting a bargain but in reality we are paying more than ever. I am so glad I'm not buying for a family anymore. Everything is changing and being aware is a good thing...being a smart shopper is a necessity !

I have noticed that several items cost more and have less quantity. Also some items you just can't find anymore. That forces you to have to buy what you like least. Bananas this morning at Walmarts here were $.49 a pound. You can't find Jimmy Dean sausage very much but just plain old Deans.
Great pictures. Helen

I've noticed trickery in packaging too and I swear tuna fish does not taste the same. I should know. I wish I had a nickle for every can my girls and I ate. We loved it.

I have noticed the same thing on certain items I use too. ove

I know that most people think I'm fat, but I'm packaged by weight, not volume. Some settling may have occurred during shipping.

It seems like if I have something I really like all of a sudden it's gone. Grrrrrrr......

I thought your dog voices were a hoot, she sure noticed the difference! I should try it on my grand kids!

We can't find Bar S hot links any more, although the stores carry that brand of smoked sausage.

I've noticed old recipes that call for "X" size of can, bag, etc., as an ingredient have to be modified because those sizes are no longer available.

LOL...so I guess someone needs to come out with a 2010 Recipe Volume Converter.

((Donna))
I've noticed it too.So many brands that I like to buy are gone, amounts are changed or the prices have gone up way too much.
But the one thing that I will spend money on is coffee. We love good coffee! I'm not a big fan of the cheaper brands. I by Starbucks, Italian Roast (x-bold) or Espresso Roast (x-bold). But on occasion I buy Peete's, especially now because of their yummy Christmas blend. A 12oz. bag of Starbucks is $7.50 at Food For Less where I shop, but they don't carry Peete's. So I have to go to Von's and pay $10.99--but I usually wait until it's on sale. But it's worth every penny! My absolute favorite coffee in the whole world is Tully's, but that dam Von's doesn't carry it anymore. Why? Because of cost cuts I'm sure!
Anymore you really have to be paying attention when shopping for anything, especially groceries.