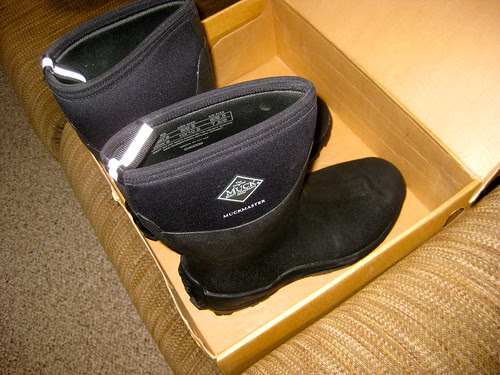 I've wanted a pair of Muck Boots ever since I noticed people at Homesteading Today were raving about them, but I just couldn't make myself pay that much money for snow boots. Yesterday Cliff finally got tired of hearing me whine about not being able to walk far with Sadie because of the snow drifts (the snow was deeper than the tops of my shoes); so he said, "Let's go to Kleinschmidt's and get you some danged boots."
First I went online, so I'd know how the pricing would be; can you believe there are over a dozen different styles, priced from $77 to $169? What could be so different about all these kinds of lined rubber boots?
We couldn't believe the crowd at Kleinschmidt's; evidently a lot of people got money for Christmas and wanted cowboy boots, because most of the time we were there, there was a line of people waiting to pay for boots.
After trying three different kinds of Mucks on, I still couldn't really tell a difference in the models; but I ended up with the thirteen-inch-tall "Muckmaster", which set us back almost $100. As we were paying for my boots, around noon, the cashier told us they'd sold six pairs of Muck Boots so far that day.
Back home, I put them on and went out with Sadie toward the pasture. Unfortunately, now that it warmed up, the snowdrifts have settled and compacted so that it's impossible to walk through them... boots or no boots. I actually got stuck in one for awhile!
My feet didn't get cold, though. I bought these more for cold weather conditions than for snow; we don't get that much snow here.
Cliff and I were having a discussion about cold weather, and he said, "I hope we don't have any pipes freeze here in the trailer house."
I told him I was pretty sure it got below zero last year, and we didn't have a problem. He didn't remember it being that cold, but I found out WDAF TV has the information I needed to win our "discussion". 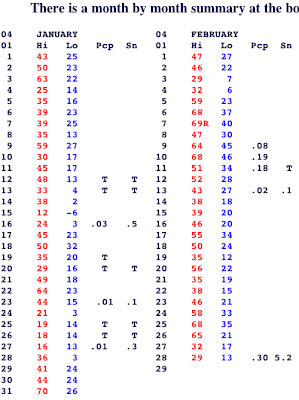