Cliff's awake; he asked, "How much snow did we get?"
I told him there's no way of knowing, since the wind has blown some places totally bare and piled up drifts in others. I don't imagine we got more than two inches.
Before he woke up, I put my coveralls and boots on again and went outside. I took water to thaw the gate-latch. Then I pondered the situation for a while.
Bonnie will usually follow a can of feed anywhere: Did I dare let her out the front door of the barn, which would mean letting her free into the whole wide world, and try coaxing her into the front door of the horse stall so she'd at least be inside with her calf? 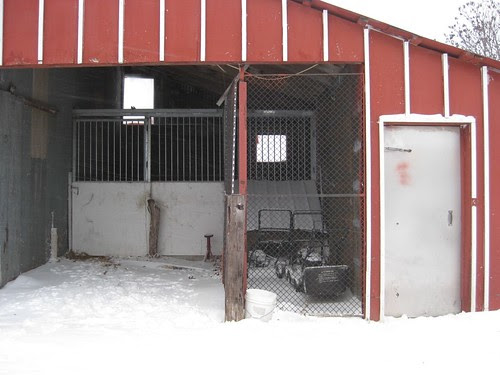 That meant getting her out the door on the right, through a snowdrift, and into the sliding door on the left. Without letting her moose of a calf out. 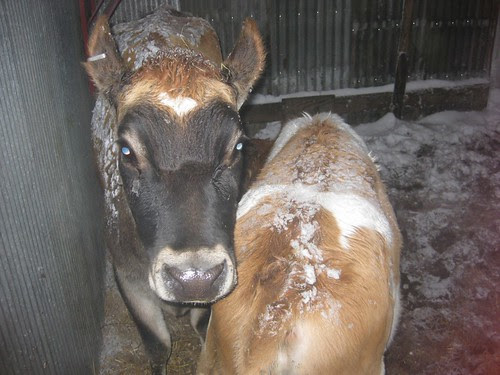 I had success with this project. When Cliff is fully awake, dressed, and caffeined up (another hour, probably), he'll figure out how to free them from their confinement. 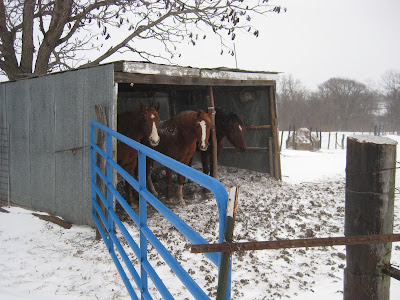 This picture, by the way, illustrates why Bonnie can't use the open-face shed. Although the horses tolerate her and her calf pretty well, they're not about to share this small space with cattle. Once we get the sliding barn door open, we'll leave it ajar so Bonnie and Sir Loin can go inside out of this awful wind.
Posted by Donna. W at 8:05 AM

The wind is terrible here and my lights keep going off and on.

I had a 4 ft snow drift in front of my garage this morning. Took me 25 minutes to get out. http://twitpic.com/v4ym9

Meesha, Cliff says that's what you get for not having a tractor with a blade.

Maybe I should ask for one for the next year's Hanukkah present.

snow drifts really bad, couldn't get door open to let daz out. wind conts to howl at high speeds. elect went out during night, hopefully it'll be back on today sometime. sooo cold. have evry blnket & comforter i have (total of 4) on bed. no cooking for Christmas dinner. :(
borrowed wireless laptop to make the rounds right quick.
MERRY CHRISTMAS...

Good of you to get the cattle out if the wind. Helen

It sounds like quite a project. I hope all the beasts cooperate with you.

That sounded like a job, but glad it worked out fine.