Because I wanted to freshen up our milk supply, I took Sir Loin away from his mom last night and shut him behind the sliding door of the horse stall. Because otherwise, he wouldn't leave any milk for me.
I knew it was going to be miserable this morning, but it's only going to get colder; so I figured I'd be wise to get it over with.
If I'd known what I know now, I would have skipped the whole thing and bought a half-gallon of milk at the store.
First of all, the sleet and freezing rain had frozen the chain that secures the gate to the small lot; try as I might, I couldn't loosen it. I could have come to the house to get water to pour on it, but it didn't seem like too big a deal to go around to the front of the barn to get access to the livestock. It turned out to be a bigger deal that I thought, since I ended up wading through three-foot-deep snow drifts. 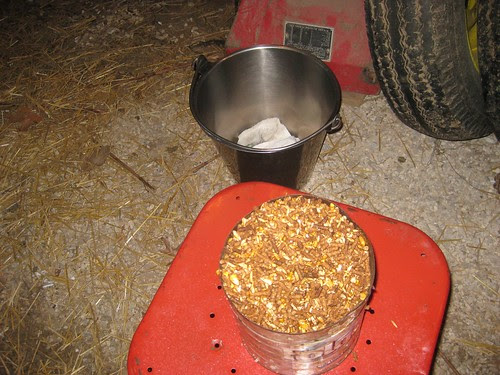 I put down my bucket with the udder-cleaning towel in it and got a full can of sweet feed for Bonnie, who is usually waiting right at the barn door to get in. This morning, she wasn't. She was behind a shed at the rental trailer, trying to keep out of the strong winds blowing out of the west. When I called her she started bellowing her complaint, and finally came on around. 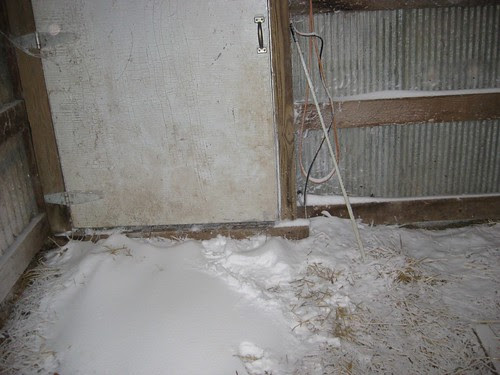 This is inside the barn. 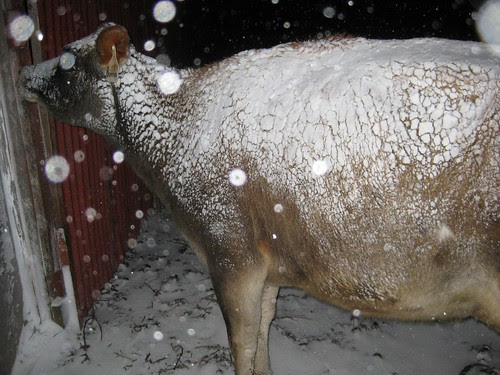 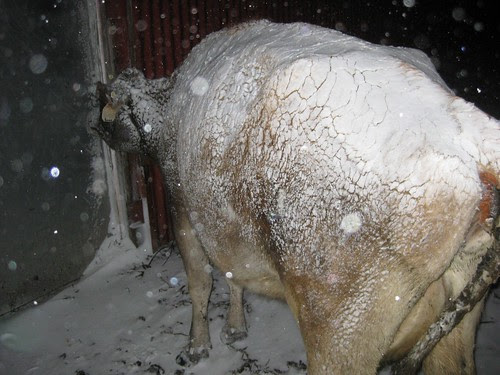 She really wanted in. 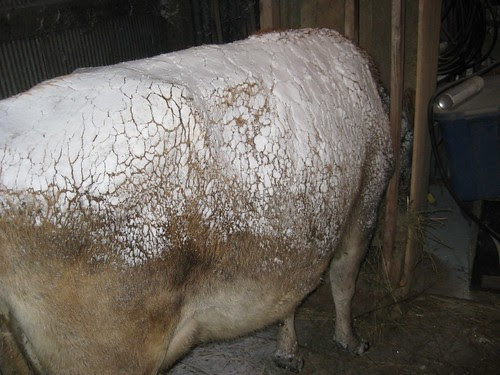 She dived into that feed as though she hadn't eaten in weeks. I got my share of the milk, turned her out, and discovered to my dismay that the sliding door I needed to open to let Sir Loin out was frozen shut. The sleet and freezing rain had gotten in the track. I pounded, I threw my body against it, all to no avail.
Now I'm waiting for Cliff to wake up and help me figure out what to do. Meanwhile, I opened up the door to the milking part of the barn so Bonnie could get out of the wind. I hope she doesn't tear anything up in there.
How's your Christmas going so far?
Posted by Donna. W at 6:31 AM

Merry Christmas Donna! I'm sure Bonnie loved the gift you gave her by letting her in the barn. It is raining here and blowing like crazy. The little snow we have is washing away. By night they say it will be much colder and we'll have snow. Thankfully the prediction is for a few inches not feet. Hope you have a happy Christmas Day!
'On Ya'-ma

Oh no....what an awful start to your day. WAKE UP up Cliff!

We've awakened to a glorious, clear morning with an east wind howling but at least the fog that's had us socked in most of the week is gone. Dear Hubby just took off to spend the morning out at his beloved archery range. I'm relaxing here with coffee and doing some cyber visiting. Don't have to be anywhere until noon, when he go to our son's. Couldn't ask for a more perfect day, really.

Poor Bonnie got all that snow oh her. No wonder she was glad to get in out of the snow and wind. She was about frozen.
Poor you having to be out in that cold. Helen

That poor cow! I would throw an old blanket or something over her back and keep her in. Cows get cold too. :-(