When's the last time you made a snowman?

Yesterday after Cliff left for work, I took Sadie out to the pasture for a walk, which is no easy task with snow on the ground. I didn't walk all of our usual paths, but I got plenty of exercise.
The temperatures were right at, and even perhaps a little above, freezing. I noticed when I tossed Sadie's stick that the snow clung to it... much to her displeasure. The snow which was so dry when it fell was now a wet snow. I made a snowball just to make certain.
"I wonder if any local kids are making snowmen," I said to myself (or Sadie, or God... I'm never sure quite who I'm talking to at times like this). "Wouldn't it be funny if there was a snowman beside the driveway when Cliff comes home from work in the middle of the night?"
Back at the house, I started rolling the big ball of snow that everybody makes for the lower part of a snow person. I don't recall that being such hard work! I had to sit down in a lawn chair and catch my breath a couple of times. Before I was done, I could hardly move the thing, it was so heavy. 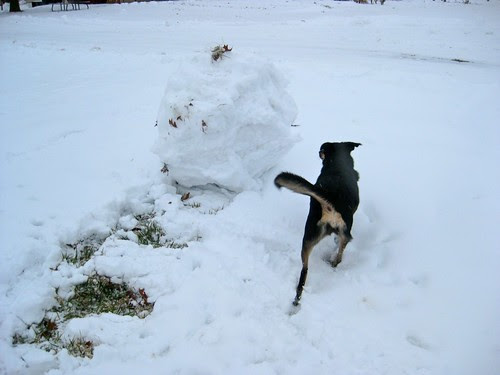 Sadie didn't have a clue what I was doing, but she had fun running around me while I labored at my task. 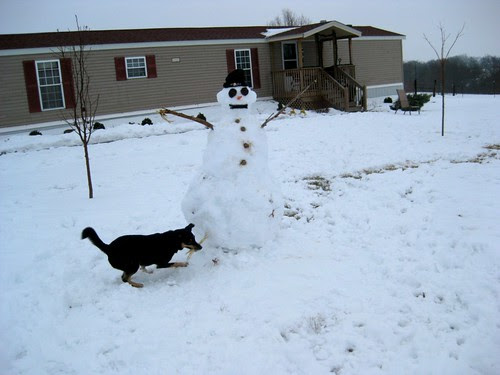 I had to become creative to add the details to my snow person: the nose, of course, is part of a carrot. But I didn't have any coal or buttons for eyes and coat buttons. I thought about looking in Cliff's shop, but that would have meant I'd have to go in the house and get the key. No thanks. 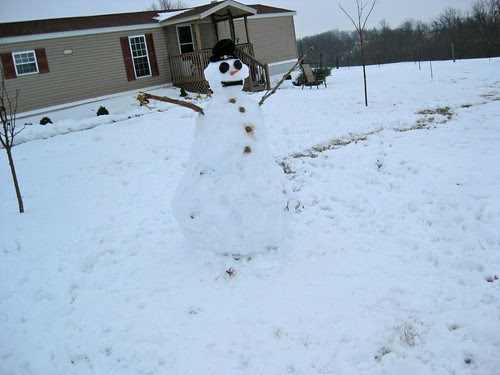 So I cut those huge eyes out of a scrub pad that was lying on the garage floor, and I used little potatoes for the (very crookedly placed) buttons. The arms are pieces of dried-out Okra plants.
Now I'm sure you've seen better snowmen before; but have you ever seen one made by an old lady, all by herself?
I'll bet it gave Cliff a big laugh.
Below is another of those Sadie videos that I took during our walk. You'll hear my heavy breathing as I talk to her because walking in the snow will make you breathe like that; and you can see how the wet snow was clinging to the stick. I'm sure her barking irritates other folks, but dogs are like children: Your own are adorable, everybody else's are brats.
Posted by Donna. W at 6:38 AM

but mom, it's MY stick!!! go get your own. grrr
lol!
she's a cutie for sure. { }
love your snowman, very handsome fella. i cAn't even recall when i last made one, guess it was when the kids where small. & that was a long long time ago.
we thought we'd had cold, but i hear starting today & for at least a week, we'll really see cold! brrr
sending you a warm huggie, may be the last one i have till spring...

I have never made a snowman due to lack of snow :( I love your's. Sadie is such a sweet doggie! Thanks for sharing her with us!

Am proud of you! Can't remember the last time I made a snowman and lifting theupper balls must have been hard!

It's been many years since I've made a snow man. Good job, Donna! :)
We did make our own sledding slides when we were still in Germany since we didn't have any hills were we lived at. We would make it in layers with steps and sprinkle each layer with water that would then freeze up.
LOL...fun times for Sadie :)

What a great snowman! The garden just keeps on giving!
I bet it gave Cliff a laugh when he got home.
Our snow is almost gone and sadly didn't have enough to build one.

It has been many years since I made a snowman. You did good. That was a neat one. Sadie looked cute defending that stick. She tried to get the snow off only to get more on it LOL. Thanks for sharing all that snow and video with us. Helen

We made one yesterday. And last night I came home to one in the middle of the drive.

It's great!!! I am chuckling away here at my desk at work. Arms made of Okra??? Oh ho ho ho....potatoes for buttons!!! I absolutely love it and your ingenuality too. Having a good time at your house is a guarentee for sure ! Happy New Year!!!

Bet Cliff wouldn't take a million dollars for his life with you. I remember the last time my kids made one (four) and it was a looong time ago. They made four to represent each of us in the family and when they were through there was not much snow left in our yard. Thats Texas for you.