No, not the kind you substitute for eggs in recipes. I'm talking about old-fashioned, hand-cranked egg beaters. I'm having a problem with finding one that lasts.
I like to use them instead of an electric mixer for just beating eggs, or for beating only the liquid ingredients of a recipe. There's less cleanup; just toss it in the dishwater or dishwasher and it's ready to use again. It's a lot easier to grab an egg beater than to get the mixer out of the cabinet, dig the beaters out of a drawer, plug it in, and mix. Then you have to wipe off the mixer body, wash the beaters, and put all that away.
I've been asked why I can't just use a wire whisk: Because they don't thoroughly beat the eggs, my friends.
Three or four years ago I mentioned to Sue, an Internet friend in Virginia, that my egg-beater had fallen apart after several years of use, and I couldn't find a replacement; she told me she had picked one up not long before at a second-hand thrift store and would mail it to me. I used it for a few years until it fell apart too.
At that time, I did find one that looked identical to it at Walmart. I used it for a few months until it self-destructed. 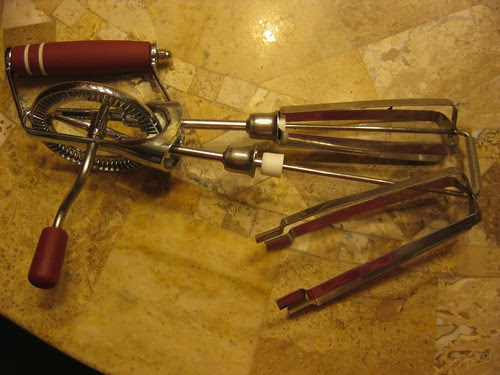 Last week I bought another one. The first time I used it, it fell apart. Cliff put it back together, but it broke once again when I used it. I tossed it in the trash; another $10 wasted. Evidently they're making them lower quality all the time. Over a span of two years I've spent $30 on egg beaters, not to mention the one my friend gave me that lasted longer (but looked identical).
"Surely," I thought to myself, "there's somebody in this world that makes an egg beater that will last me the rest of my life."
After all, my mom used the same one all her life.
In the recesses of my faulty memory, I recalled that there exists some store that sells quality, old-timey items to Amish and Mennonite people, but I couldn't think of the name. I Googled "amish mennonite catalog" and there it was: Lehmen's. 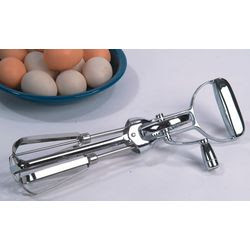 Sure enough, they stock an egg beater. Unfortunately, it costs $50.
You know what? If I could be SURE it would last as long as I need it, I'd buy it. I'm still pondering.
Posted by Donna. W at 5:40 AM

I still have my egg beater from when I first started house keeping. It still works. Maybe I don't use it often enough to wear out, but it does still work. Lehmans Hardware is near to where we camp and I've visited their store a few times. They have everything. From the quality of what I've seen there I believe you'd be making a good investment.

you should look on ebay, that's where I bought 2 brand new Rival meat grinders from the 70's for under $10

$50.00 for an egg beater knocked me out at first but then I thought if it lasts your lifetime it would be worth it.

Mine came from the Salvation Army several years ago bought by my MIL before she passed away. It still works. I use it for beating eggs. Helen

We bought a real nice OLD camping trailer, fully equipped - old egg beater and all. It has a slanted wooden handle. I love using it and you are right about lugging the mixer out, looking for the beaters and then trying to get them out of the mixer to wash. What a pain in the rear. Pat

I love those old egg beaters too. Must be one somewhere for less the $50.00!!! But if it works and it lasts it would probably be worth it.

I immediately ran and pulled out my egg beater which I have had for so long I can't even remember where or when I got it! I use it every week several times a week for beating...eggs!! hahah! It's an Ecko and I can tell it is old b/c it has plastic on the top and handle worn to a shade of cream, which I suppose is appropo. It is heave and very sturdy, which is why I have had it for I bet over 20 years...good luck finding a replacement!

My eggbeater has been sitting in the drawer unused for at least 30 years, it belonged to my Mom. It's yours, Merry Christmas. Email me where to send it. It is a Maynard, made in USA. Vicki