We never know what tomorrow will bring 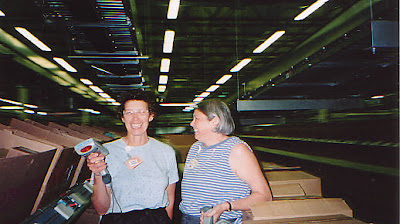 In the early days of my working for Kohl's, back before all that walking on concrete totally finished off my knees, I loved the job. We worked in pairs, and at that time we were allowed to partner up with anyone we chose. That's me and my partner, Judy, in the picture. We worked at about the same pace and got a lot of work done.
Another former co-worker, Jessica, is a Facebook friend; she keeps in touch with Judy, and when I signed onto Facebook this morning I had this message awaiting me:
Hi Donna! I wanted to let you know some bad news about Judy. She was shopping with her husband yesterday and she felt tired and weak so he took her to the doctor. They sent her to the ER right away and found she was having an issue with her heart. She was having symptoms of a heart attack. They did testing and found she has 80 and 20% blockage and it's too close to her heart to do a stent. She went for more testing today and they also found she has calcification (sorry I'm a bad speller) on her aorta, and the flap on her heart is leaking blood. The doctor said all those things can be corrected with open heart surgery, but the calcification is very serious. He said the chance of her having a stroke while they remove the calcification is 85%. She is at (name and location of hospital) and the Dr. told her he knows a Dr. in Texas who does this kind of surgery every day and if she was his mom he would want her to go there. Her Dr. is going to try to schedule an appointment next week and if the doctor in Dallas is available she will fly there Monday for preperations for the surgery.
Judy is younger than I; when we worked together, she had some problems with her blood pressure, but finally got that all straightened out.
When the doctor discovered Cliff's heart problems and wouldn't even clear him to drive the car from his offices on the hospital, I thought that was a worst-case scenario. Now I can see how much worse it could have been! At least his problems were repaired within two days because an excellent surgeon made the time for his operation. Judy is going to have to travel to Texas for surgery, and even with the renowned doctor down there, it sounds like the risk is high.
I'm sharing this for two reasons: First of all, I know Judy would appreciate any prayers and good thoughts on her behalf. Secondly, to remind us all that we are never guaranteed our next breath; seize this moment.
Posted by Donna. W at 7:53 AM

I will be praying for your friend. It is so true we do not know what tomorrow brings. It's so sad that so many waste their todays. 'On Ya'-ma

I'm so sorry to hear about your friend. She and her family are in my prayers.

Sending up prayers for Judy and her husband for a safe trip and successful surgery and quick healing for her. Helen

Very good post. And very true.
A good reason to tell your loved ones how much you love them and not sweat the small stuff.
Our gramps just had a stent in his heart a couple weeks ago. He is doing well and back at home now, but it was scary for awhile.

Sending prayers for your friend Judy. Hope her trip down here to Texas will be as easy as possible.

Prayers going up for your friend, Judy. Bless her heart, literally. And here at Christmas time, too. Not there's ever a good time for news like this.

Things can change in the blink of an eye. Most people don't get that. Hope your friend does ok.

Seems like there's so much heart illness around more and more these day. Even though they maybe belated I'm sending some vibs your Judy's way.
Sadly I lost a neighboring farmer to heart troubles. He was taken to the local premier cardiac hospital three times over the last couple weeks. Evidently three stints were of no help for him. Then again, he might have been his own worst enemy the way he unhealthily ate fatty foods. He behaved as if he knew better than the doctors. Stupidity?

You guys keep yourselves well.