Recently I used a pumpkin-bread recipe to make some squash bread. It was very tasty, but seemed more like cake than bread. I decided to make more of it today; in the process, I figured out why the last batch tasted so cake-like. 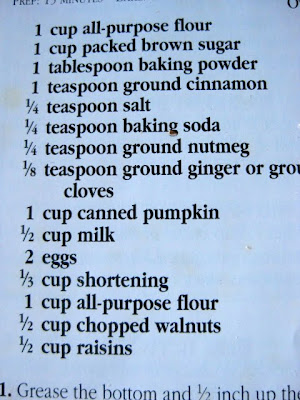 I didn't notice the added cup of flour at the bottom of the recipe before! I was excited to know that this time my bread would actually BE bread, until I found out I didn't have enough flour (I was doubling the recipe so I'd have a loaf for the freezer). I needed another two cups, and I only had about a cup-and-a-half.
Now, I have a key to my sister-in-law's house next door and permission to go in and borrow foodstuffs any time I need to; but somehow it didn't seem worth all the effort of putting on my Muck boots, bundling up, wiping my feet once inside her house, and hunting down the flour. Besides, the cake bread was good before, and I used only half as much flour as I should have. 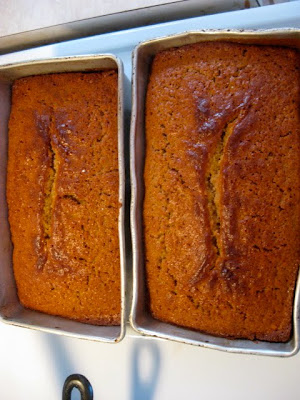 New Year's Resolution: In the coming year, I will sit down and read through a recipe to the very end before I start mixing it up. And I will make sure I have all the ingredients before I start.
Yeah. That's gonna happen.
Posted by Donna. W at 3:37 PM

Oh my goodness, that smells good.
I guess I'd better get some food in my stomach. :)

I could eat a big piece of that right now. Helen

Oh that looks so so good. And I just read an article about how healthy pumpkin is....

Looks good. I'm bad about starting something and then discovering I don't have an ingrediant. Didn't happen so much when my kids were home and Mel was alive but now I don't cook as much.

ThaT SOUNDS LIKE SOMETHING i WOULD DO. lol iT LOOKS DELICIOUS!

I made snickerdoodles before and somehow left out the sugar. They were nasty cookies!