We finally got out of the house 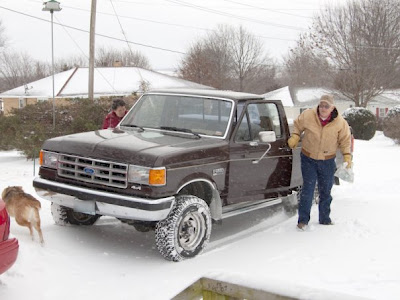 The roads are treacherous, but our old pickup is a four-wheel-drive. Even with half-worn-out tires, it took us up the hill to our daughter's house in style. Rachel took this picture of us arriving; notice Hawkeye, the wonder dog, running around the front of the pickup to greet me. I'm pretty sure if you asked Rachel and Kevin to name the best dog they ever had, they'd say Hawkeye. How many dogs will howl at the slightest suggestion, just to entertain his people?
Speaking of best dogs, someone got the impression from my previous entry that I was calling Suzy a terrier. Believe it or not, when my sister-in-law bought her at a pet store, they claimed she was part terrier; I don't think so. I always figured she had some sort of spaniel blood in her, but you know how it is with mutts: you never really know, unless you're personally acquainted with their parents.
It was good to get away for the first time in three days, and our daughter lives less than two miles away. They still had plenty of Christmas junk food, and Rachel made some hearty soup from a home-made soup kit someone gave her for Christmas.
I don't know what it is with me, but after I've eaten dinner, around one o'clock, I get really sleepy. It doesn't matter where I am, even on the back of the motorcycle; my eyes get heavy and I fall asleep (that sounds more dangerous than it is). So yesterday I reclined on Rachel's couch and drifted off as usual. I awakened to snide remarks about my snoring, my husband telling them I always snore like that, and my daughter saying I sounded like her coffeepot.
Oh well, I got my nap in, didn't I? I can take the abuse.
If Cliff thinks we can safely get out in the pickup today, I'm wanting to go to Sam's Club. We'll see how things go. Those of my readers who have tried both, I'd like to know whether you prefer Costco to Sam's Club, and why. I'll make a poll on my sidebar, but would appreciate hearing the reasons for your selection in the comment section of any entry.
I took the Christmas tree down yesterday; there were so many needles on the floor that my Dyson got plugged up several times, but we finally got the worst of them. I'll leave my Avon Christmas plates up through the month of January, because I enjoy them so much. I'll also continue using holiday mugs for that length of time. Then I'll remove all traces of Christmas until next year.
I wanted to put a nice, wintry picture on the header of my blog, and I'm happy with the picture of Sadie running toward me down in the "holler"; however, I have tried every color of the rainbow for the wording on there, and nothing works very well. White seemed to show up better than any other choice, but it's not really satisfactory either. Until I change pictures, that will have to do. I changed where I put my usual quote because it was totally illegible on that particular picture.
Posted by Donna. W at 6:22 AM

Glad you got out. I would love an afternoon nap, but as I'm usually at work that just doesn't happen. That is not to say that my eyelids don't get heavy though. I've only ever been to Sam's club but I have heard that Costco offers more selection of food items. I've loved Sam's for years and really appreciated them when I had a growing family to feed. I'm sure I saved bundles by shopping there. Now a days my shopping is on a much lower scale and I don't get there very often.

Glad you got out and got to see Rachel and have some soup....naps are just fine, snores or no snores. lol

I am usually ready to remove the Christmas decor by the time New Years rolls around. But, this year just went by so fast. Hardly seems like Christmas is over yet but it is.

Congrats on getting out of the house after three days :)
Love your new header :)
I usually get the yawns around 5 PM...good thing I don't fall asleep since I'm at work at that time.

We had to get out yesterday also. I had cabin fever. Of course, our weather is nothing like yours. Please be careful if you get out today.

I really enjoy both Sams and Costco...and since we don't have a costco in our area we shop Sams..about once a month...but I enjoy Costco as they seem more organized...a bit less like a warehouse (and yes I know that is the idea of warehouse sales LOL)..and the food items seem better at Costco..more selection..variety...and as for our pets...best whatever and such...I think personally the dog and cat I have now are the best..and I have good memories of other pets of the past!!! Happy New Year...Ora

I plan on looking for my car today.. I think I know which bump it is.... probably won't drive it anywhere though since my street has yet to see a snow plow...thanks KC....

Glad you managed to get out and about safely. Our snow is disappearing fast.

Ok, I love Costco more. We have a Costco close and a Sams close and we belong to both of them. I go to Costco a lot more. Their selections are more abundant. From food items, to clothing, to books and clothing, and their foods that are already made up and ready for you to heat and heat or just serve are as good as what I can do. I have bought my granddaughters fancy Christmas dresses there for 3years now. You can't beat around $20.00 for a "party" dress. Anne

We only have Sam's so I can't compare, but I do like them there.

My family is always teasing me about my snoring so don't feel bad. I've snored forever, even before I got 'stout'! lol!

We are getting tons of rain today. My whole family is down at the Pat's game but I chose to stay home with Grampa and I'm glad I did. It's going to be a mess when this all freezes.