That Oregon guy often blogs about his pickup, and it got me thinking about our 1988 Ford. 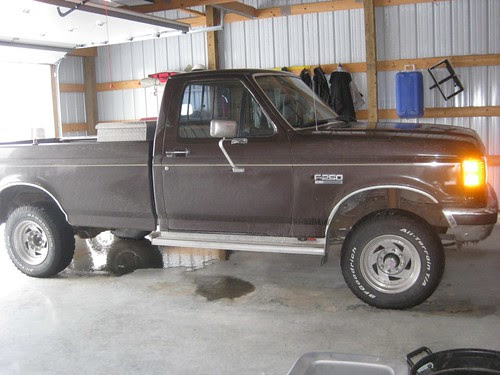 The old truck has been with us through thick and thin. We bought it in 1989, barely used. At that time we didn't think much about what kind of gas mileage it might get, but we were in for a shock: at best, it gets twelve MPG.
These days we only use it when we need to haul something, or pull a trailer. Or, as in the past few days, when we need to get around in the snow and ice. Our Grand Marquis is not front-wheel-drive, and it's pretty much helpless on bad roads.
Our oldest grandson wheedled and begged, a few years ago, for Cliff to sell him the truck. Cliff told him repeatedly he wouldn't be able to afford to drive it, but he persisted, and also promised that any time we needed a truck, we could use it.
Finally Cliff gave in. He didn't make Arick go to a bank for a loan; he just told him to pay a certain amount per month and it would be deducted from the total price (an amount which neither Cliff nor I can remember). He paid faithfully, but after several months, the cost of gasoline for the pickup started to hurt. Cliff mentioned one day that he missed having a truck around when he needed it, and Arick said he'd let us have it back and we could keep the money he'd paid on it if Cliff would co-sign for another truck, a newer one that wouldn't use so much gas.
So, old Brownie was back home. Arick did pay off the loan for which Cliff co-signed, in case you were wondering. But then he would, knowing he'd have me to contend with if he missed a payment. 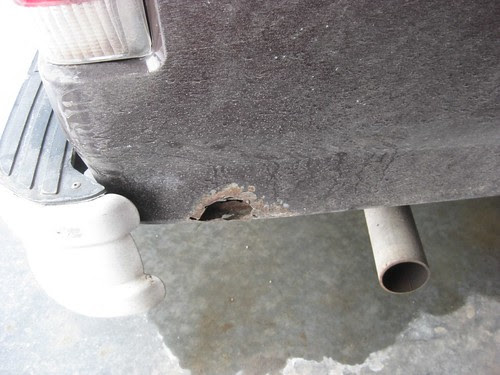 On the right side, there's considerable rust near the bumper ... 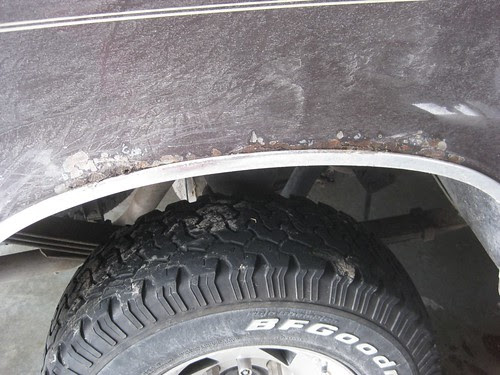 ... and above the tire.
There's none on the driver's side because about sixteen years ago, Cliff had a little incident with a trailer, and that part was replaced by insurance. These days we don't keep full coverage on the truck.
I need help getting into it now, thanks to knee problems. The truck is pretty high off the ground.
A neighbor kid keeps offering to pay $3,500 for Old Brownie. I remember how we missed her when Arick had her. Besides, if we were to sell it to a neighbor kid, Cliff would probably feel responsible for every little thing that went wrong with it.
When the truck turns twenty-five, if it lasts that long, it will officially be an antique; we'll get a collector's plate and never buy another license plate again. I say we hang onto it. It really owes us nothing.
Posted by Donna. W at 9:39 AM

It's been a good one. I don't blame you for hanging on to it for emergency use, like you did the other day.

You sure can get attached to an old pick-up, can't you? I drove ole Blue for thirteen years, my grandson drove it two years and now John has had it for a year or two. I still get to drive it though. Hee hee.

The Guy Who Writes This said...

My 1980 Ugly qualifies.
That move would eliminate yearly licensing and at least 60% to 80% on insurance premiums.
hehehe