Shopping for a certain tractor

This time, it was my idea to look for a tractor similar to one we once owned:  An Oliver 550 or Super 55.  The reason either model would work for us is that the one we owned was actually a Super 55, but the guy who restored it dressed it in Oliver 550 clothing... a small detail which got us in trouble years later when we decided to sell it.  But I digress.
Cliff's on an Oliver kick right now, so he's all for buying this tractor I want; he's learned to strike while the iron is hot, and it isn't every day I get in the mood to buy a tractor.
Finding such a tractor is another story, though.  An old farmer right down the road has one in his shed that needs some work, but Cliff went to talk to him and he doesn't want to sell it.  Says he intends to get it running "one of these days".  Oh, sure.  It's been sitting there for at least twenty years, and he's about seventy years old.  But it is HIS to keep or sell, as he chooses.
So I put an ad on Craigslist stating that we want to buy an Oliver Super 55 or 550.  We've had one call, and here's the tractor, a Super 55. 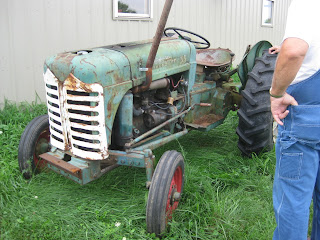 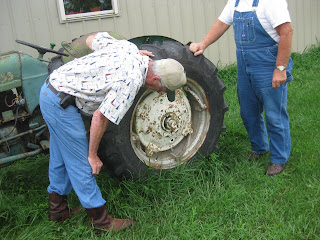 (As always, click on the pictures to make them larger.)
This tractor had a couple of things going for it:  a recent overhaul, and brand new tires on the back.  Those tires are worth $500, and the overhaul would cost around $1,000.  It also had some problems, about which this fellow was very up-front and honest.  He was a really nice man.
He was asking $1,800 for the tractor.  Do the math on the tires and overhaul and you can see it was a good buy.  This is why Cliff didn't try to dicker with him for a better price.  But in order to get it up to show quality, a person could easily sink another $1,000 into it, and Cliff would rather find one that doesn't require so much work.  He's also prefer a 550, but would take a Super 55 if it was in decent shape and priced right.
When you're looking for a certain tractor, the thrill of the chase is half the fun. 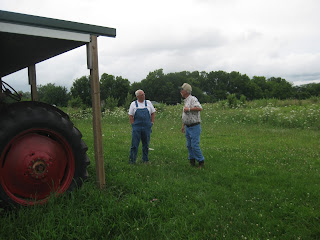 We went out back and looked at his other Oliver tractors, the ones he pulls at antique tractor shows.  And then we came on home.
Posted by Donna. W at 9:26 AM