Meat for the freezer 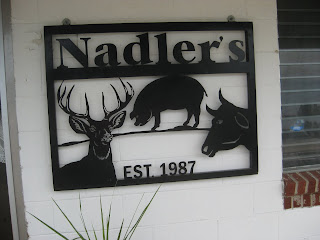 We went up the road a mile to pick up the meat from the steer we had butchered.  Processing cost was $224, which seemed like a lot to Cliff because when he worked at a butcher shop in the '70's, it would have been about $60.  "Yeah, but gasoline was fifty cents a gallon then, " I told him. 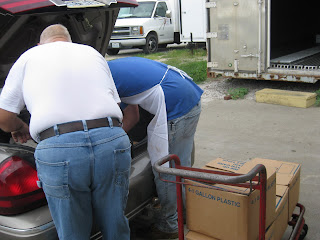 Cliff helped load the boxes into our trunk; we wondered if the trunk was big enough.


It was, barely; and our Mercury Grand Marquis has a big trunk. 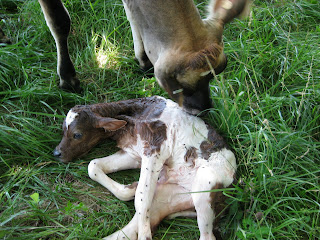 Sir Loin started like this, and my readers helped name him; 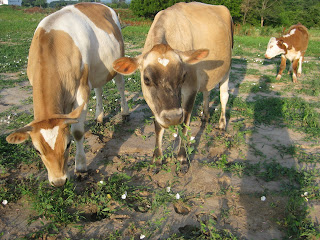 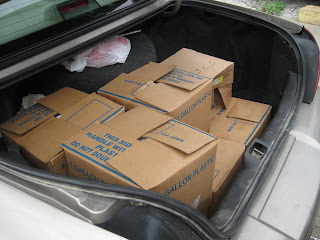 And ended up like this.  All in the space of one year.
Despite what Cliff considers the high cost of having him butchered, I say that's pretty cheap beef, considering Sir Loin was raised on free stuff:  his mom's milk and the abundant grass on our place.
Posted by Donna. W at 11:48 AM

That is a lot of beef. Do you eat it all or give some away. We used to get a half a beef and even that was a lot of meat. Considering where it came from I'd say it's going to be choice meat fit for royalty.

Do you keep the head?! That's how barbacoa is made! (good stuff....I had it for breakfast yesterday....and fairly expensive, considering it's made from a part most people would turn their nose up at....)

And yes, I have gone back to being a vegetarian(really). Ackkk. But you know, my real gripe is with people who hunt but don't use what they kill..not with you.

Oh! I'm such a city girl. Looking at the little calf, I suddenly realize I couldn't eat what I'd raised. I'm sure he will taste wonderful and he led a good life and . . . well, as I said, such a city girl! And I know the rationale -- but in the grocery I can't see the sweet little calf (and name him!). You will have a lot of cooking ahead of you . . . Milly

The price of beef in the stores here is very expensive, so I would think $224 for processing Sir Loin is very reasonable. I dread shopping for meats because the prices are so high.

Looks like everyone is going to be eating goooooood around your place!

Have you ever figured out the per-pound cost? Many folks don't know how inexpensive it is to raise your own beef.

We used to use Nadlers for our steers. I would always sell a quarter and that paid for the processing. And generally gave another quarter to my girls! Best thing about raising your own is tha you know there is nothing bad added to their diets!