Lots of people wonder why Cliff is still holding down a job at the age of 65.  His co-workers often ask him, "When are you going to retire?"
Cliff tells them he plans to work as long as he can walk through the doors of the place.
It isn't that he's afraid of retirement; he would have a blast working on his projects unlimited by the constraints of time.
We just don't have a huge retirement fund.  Cliff spent a lot of his working life toiling at small businesses that had no retirement programs, no 401K... nothing.  Oh, I'm pretty sure we could get by, at least for a few years.  But there would be a lot of "cutting back".  I've let him know I'm willing to try it, but he says, "No; I like to spend money too well to retire."
Let's face it, motorcycles and tractors are rather expensive hobbies.  Add to that the fact that his job isn't physically hard at all, and it isn't rough on his body; so he figures he could do it as long as his brain is working.
In the back of his mind, though, he tries to figure out a way to have his cake and eat it too.
He's often explored this option:  A guy we know once made a deal with an elderly lady for her farm.  She was a widow, a retired school teacher who never had children.  She was willing to sell her place to Tom so long as she could live in the farm house until she was ready to move to town.
So she had her house, but she didn't have to worry about taxes or upkeep or mowing the pastures.  She was living there scott-free.
Cliff thinks this would be an excellent solution.  Let the buyer live in the old house, fix it up if they liked, while we spent our remaining years back here in the trailer house.  Then I remind him he simply has to have his shop, so the buyer wouldn't have use of that; and for the time being, we will have a cow or two to pasture; so we need the barn to store hay.  And we're in our mid-sixties.  There's a pretty good chance at least one of us will live another twenty or thirty years.  I'm thinking any buyer of the place would be getting antsy, waiting for someone to croak, while all they really had access to would be the old house and the old garage.
We've also discussed selling off the original six acres we bought, which includes the house, barns, and.... Cliff's beloved shop.  Nope, won't work.  Not to mention the fact that the well supplying our water is on that piece of land.
So we just take it one day at a time, enjoying each moment, knowing that something might happen on any given day that could make the whole predicament irrelevant anyhow. 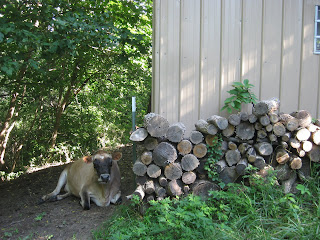 Meanwhile, Bonnie continues to camp out at my cabin, making plans for her next baby 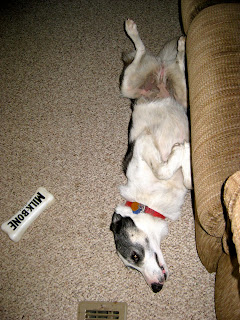 and Iris leaves it to the humans in the household to ponder such predicaments as retirement.  She isn't worried; she was born retired.
Posted by Donna. W at 7:44 AM

Email ThisBlogThis!Share to TwitterShare to FacebookShare to Pinterest
Labels: retirement

I would just take it one day @ a time also Donna. Here we are from week to week....

Hollie said...
This comment has been removed by the author.
9:21 AM

One day at a time is the only way to go I had a tough time making up my mind to quit working. It took me a long time to decide I'd be happier living with less than doing less living. So I joined the land of Happy but Poor. As long as Cliff enjoys what he does that is the important thing.

Absolutely love the pictures of Bonnie! Is she bred again? Hubby wants a cow but no way will our town let us. Grrrrrrrrr..........

Hubs father is 93 and still goes into the office every day for eight hours so there's no way the Hubs could even think of retiring!

I will be 65 in October and have no plans to retire. But realtors never retire, they just get listless!

YOU ARE WISE TO THINK THINGS TGROUGH. TAKE YOUR TIME. sam

I know, retirement scares me. We have 401k's. But I think we'll have to sell the house and buy a camper or something. We'll still owe a lot on this house. Who knows. When it comes down to it, you'll do what you have to, to get by.