When I go to a pot-luck dinner and see meat loaf, I'm never quite sure what to do:  Depending on the cook, meat loaf can be a wonderfully delicious comfort food, or it can be unpalatable.  You just never know.
This morning when Cliff was lying in bed sipping his coffee, I said, "I have a pound-and-a-half of hamburger thawed.  I can make chili, or beef-and-bulgur casserole, or meat loaf.  You choose."
He likes all the above, but I was pretty sure he wouldn't choose chili because we have it fairly often in the winter.  I was betting on the meat loaf.
And that's what he started to say, until he remembered what beef-and-bulgur casserole is and began to waver.
"Cliff," I told him, "You don't have to decide this instant.  I won't be starting dinner for three hours."
As I headed to the kitchen, he called after me, "Would we be having mashed potatoes with the meat loaf?"
Silly man.  Don't we always?
So he made the choice I knew he would: meat loaf.
I was tearing up enough bread to make two cups of crumbs for the meat loaf when I suddenly recalled something I used to do when I was a kid.
Growing up, I was never denied access to the kitchen.  Mother never told me, as I used to tell my children, "It isn't long till supper; you'll spoil your appetite."
So sometimes I'd get a nice, fresh slice of bread, 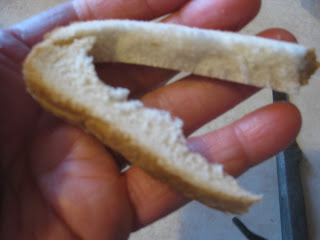 remove the crust from around it, 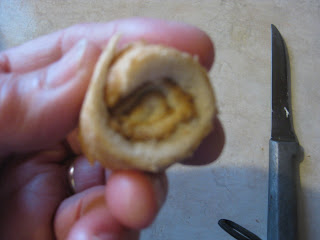 roll the crust up like a cinnamon roll, and pop it in my mouth, sucking on it until it disappeared.
Then I'd take the soft, white bread that remained, 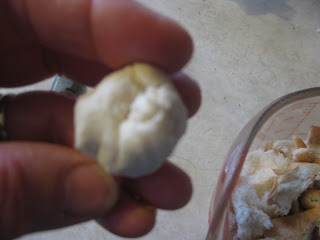 compress it into a dough-ball, and pop it in my mouth.  Sorry about the blurry pictures, but I'm not going to destroy a slice of bread just to redo the pictures.  The bread you see above is already incorporated into the meat loaf that's in the oven.
I don't know why I'm telling you this; isn't it funny the random memories that are stirred up in the kitchen?
The meat loaf recipe I use is not from my oldest Better Homes and Gardens cookbook; that version wasn't as good.  This is from a BHG cookbook I acquired in the late seventies, and I notice they've repeated it in the newest edition, too.