Cliff and I have really been needing some motivation to get us on the right track.  I've been planning, as I've said here, to get back to the heart-healthy cooking; seems like we've gotten so far off-track, and it isn't easy to get back on.  Eating, after all, is one of my favorite recreations, followed closely by cooking fried foods and baking pies and cookies.
Motivation has perhaps come in a way I could have done without.
Cliff's older brother, Phil, had a heart attack this morning; his daughter-in-law posted it on Facebook or I wouldn't have known yet.  He'd had open-heart surgery about ten years ago.  This morning the doctors found that one artery was 97% blocked.  They put in two stints at the bottom of his heart and he's doing OK, although they believe there is some damage.  I'm sure they'd appreciate prayers and positive thoughts on his behalf.
I'm thankful Phil is doing well.
Cliff is going to lose the extra weight, and so am I. 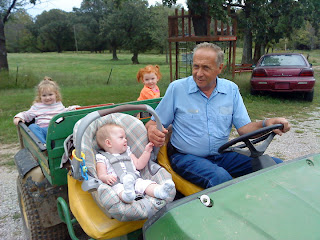 That's Phil last summer, enjoying some of his many grandchildren.
Posted by Donna. W at 1:01 PM