I never listened to country music when I lived at home with my parents, unless it was forced upon me, for instance, when the folks listened to "Ozark Jubilee" on Saturday nights.  I liked the kind of music all teenagers did:  Elvis, Pat Boone, Bobby Darin.  Then all those British groups came on the scene and I stopped listening to the radio.  I like the early Beatles stuff nowadays, but it was just too much change for me back then.
There was a lady originally from the Lake-of-the-Ozarks area named Lois Hedrick who worked with me in the yard goods aisle (we called it the "cutting aisle") at National Bellas Hess.  She could finish her tickets in half the time it took me, and then head off to the rest room with cigarettes in hand singing, "Winston tastes good like a cigarette should."  When she got back, I'd still be working on my bundle of tickets.  No, I wasn't that slow; she was that fast!
If I got upset at some unfair situation at work and got teary-eyed, she's say, scornfully, "That's all we need around here is a damned cry-baby."
Believe me, it's what I needed to hear at the time; it dried my tears right up.
Lois had a sharp, hillbilly sense of humor and had me laughing often.


I wonder what ever became of her?  Do you suppose those Winstons finally killed her?  If she's still alive, she'd be in her seventies.
But I digress.
Lois often talked about George Jones and what she'd do with him if she ever had the chance.  Looking back, that's hilarious.  Have you taken a good look at pictures of George Jones?  Even as a young man he wasn't very good-looking. 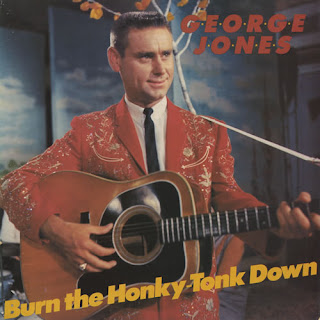 She talked so much about him that I became curious and hunted up the country music station on my radio, back at my apartment.  When I finally heard George, I wasn't that impressed.  I heard a guy once in awhile named Willie Nelson whose singing I rather liked, but he never seemed to make the top ten, so he didn't get much radio play until years later when he grew a beard and long hair and started smoking pot.
Gradually I got sucked in; the folk craze came along, and I'd listen to different stations to hear Peter, Paul and Mary, and the Kingston Trio, but I'd end up back on the country station eventually.
I started getting a yearning for a guitar, and bought a really cheap one.  Man, that thing was hard on the fingertips.
I purchased a book of chords and found out that if you know three chords, you can sing most of the country songs ever written.  Sometimes the folk songs only needed two chords!
I would leave the radio on late into the night, and hear what were then "oldies" that were new to me:  Miss Kitty Wells singing "Honky-tonk Angels", for instance.
I went out and bought a two-record set that had all her hits on it.  Every one was in my key, and my three chords worked just fine.
The first country song I ever learned to strum along with was "Honky-tonk Angels".  I still enjoy singing it.
When I met Cliff, we wore those Kitty Wells records out until you could hardly hear the music for the scratching sounds on the worn-out discs.  We'd go to sleep listening to Kitty.
So, why am I discussing this?
We currently have the RFD channel in our Direct TV package, and I happened upon The Marty Stuart Show, an episode shot in June of this year.  Kitty wells was there, sitting on the sidelines as they did a tribute to her. 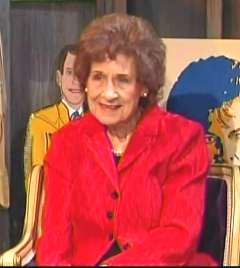 She's in her nineties.


Added later:  I did a zabasearch on Lois Hedrick, placing her in Missouri.  There's one the right age, and in the right area (I know she would have retired back down in the Ozarks, she loved it there).  Born in 1935, which sounds about right.  Dare I write a letter and ask if she used to work at National Bellas Hess?  Two different addresses are listed for her, so I'll have to first try one, then the other... if I decide to contact her.  The worst that can happen is that if it isn't her, she'll ignore it.
Posted by Donna. W at 6:44 AM