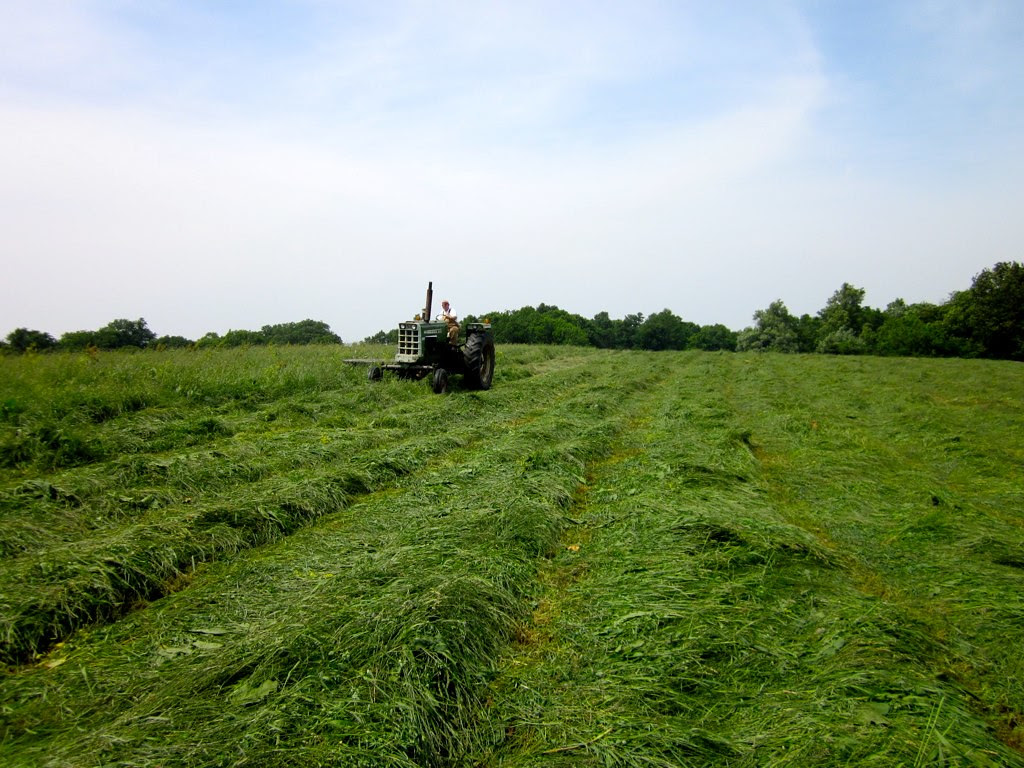 Cliff is mowing hay today; this three-acre patch will supply more than enough hay for Bonnie, her new calf that's due in August, and baby Jody, during the coming winter.  We're hoping the weather-guessers are right, and that no rain will fall on this hay until it's cured and put in the barn.  The ground is so soaked from recent rain that it'll probably take three days for this to cure. 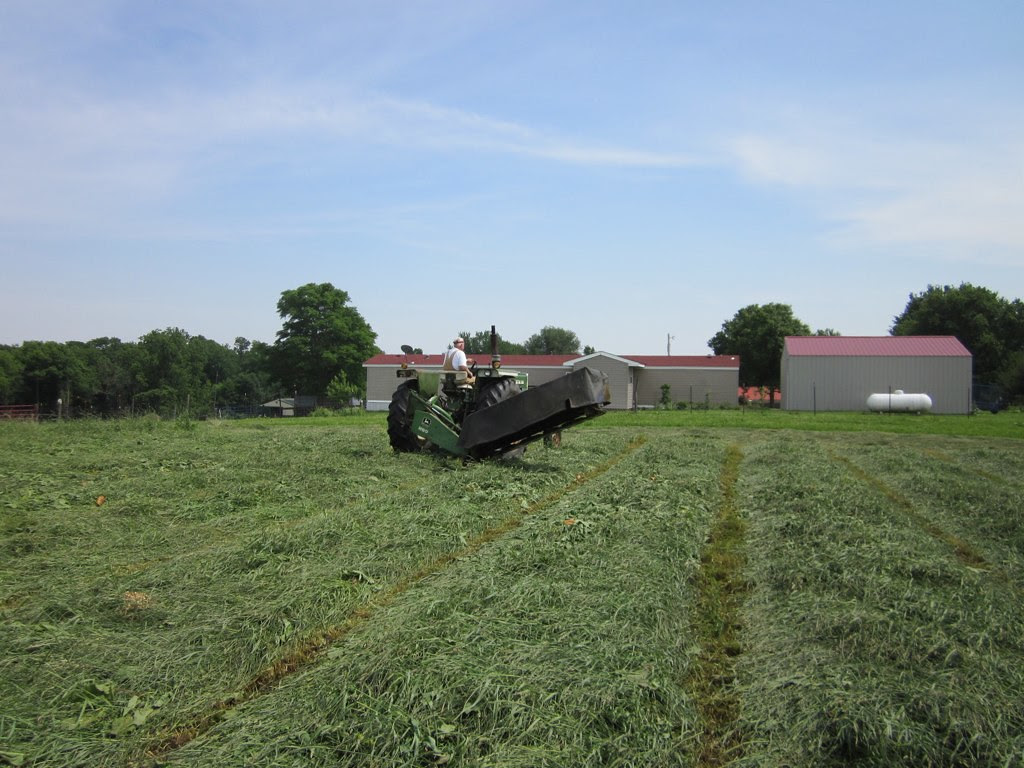 I love having a hayfield right behind our house.  Bonnie-the-Jersey-cow has been grazing on this patch for months, but she hasn't made a dent in it. 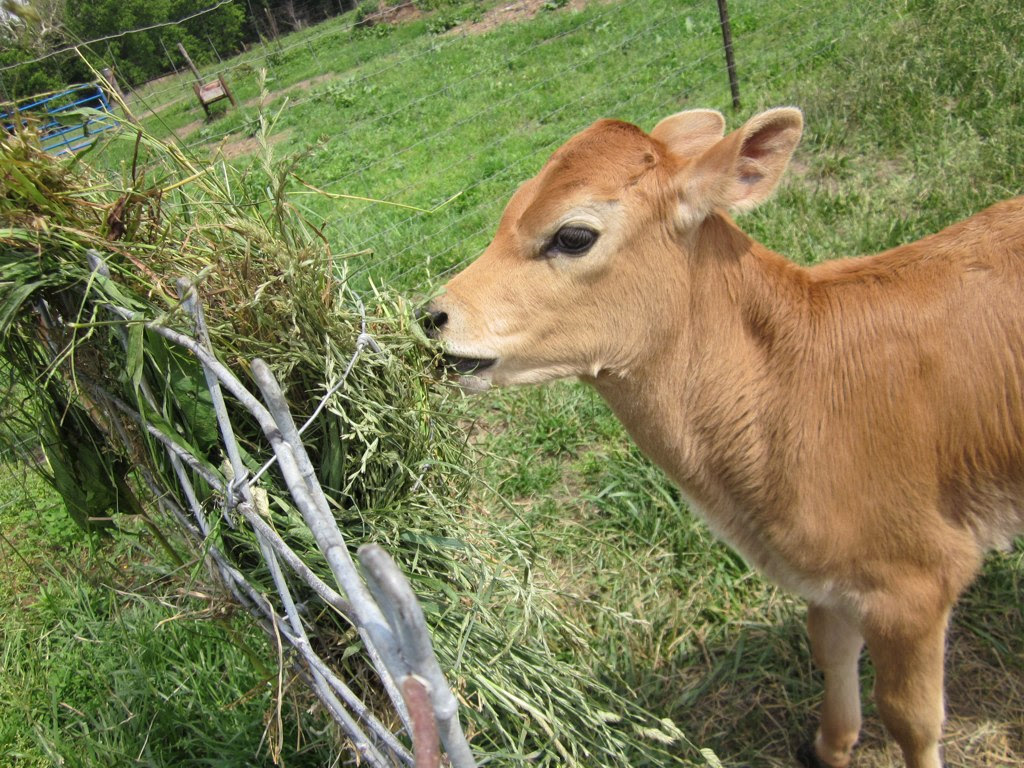 I carried an armload of hay to Jody for a quality check. 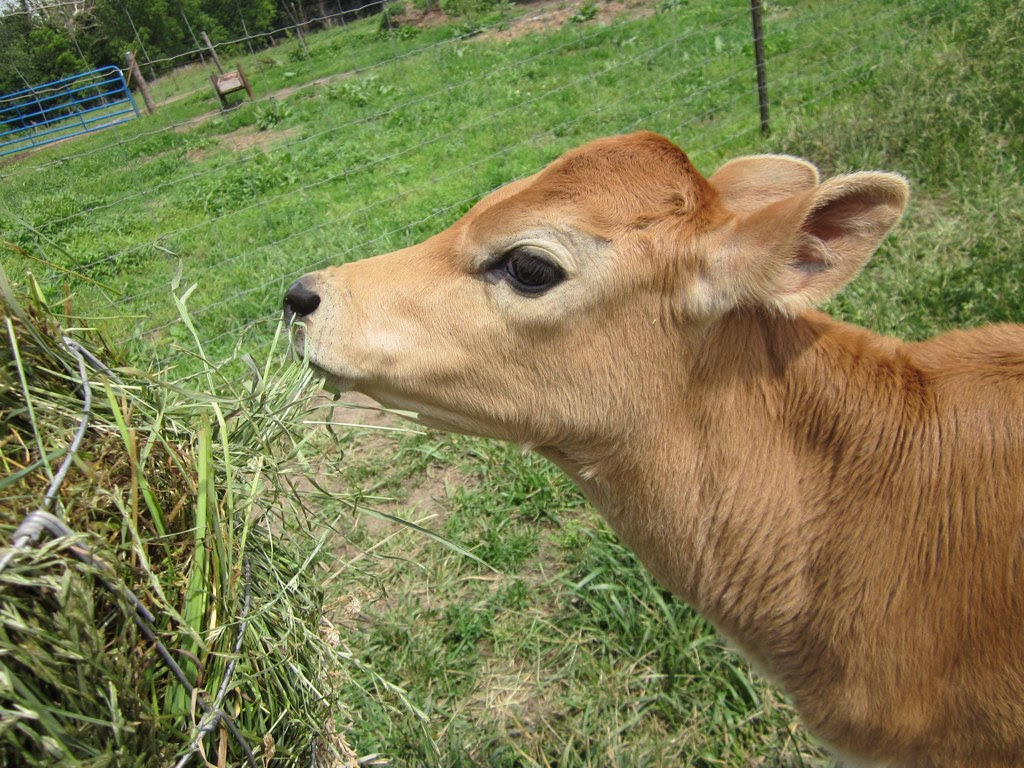 She gave it her seal of approval.  I'm only giving her one bottle of milk replacer a day, since she's eating from three to five pounds of calf starter (grain specially formulated for baby calves).  By the time she's two months old, she'll be totally off the bottle.  She's a real pet, and is well on her way to being as spoiled as Bonnie. 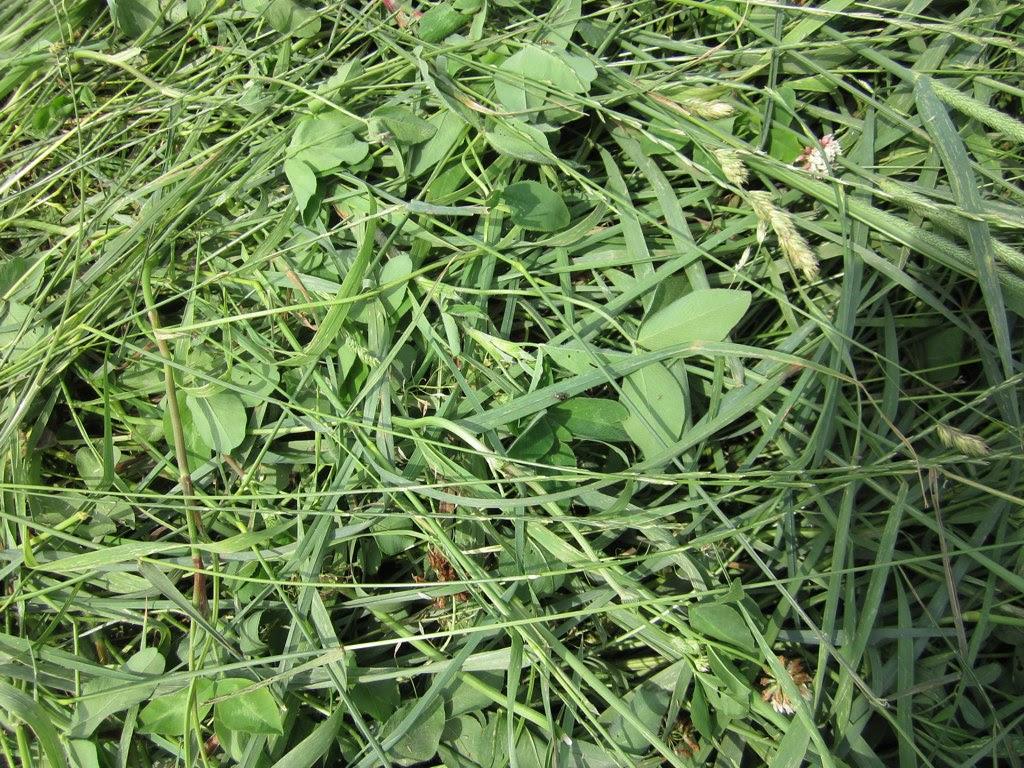 Here's a closeup of some of the cut hay.  You can see there's lots of clover in it.  Since we don't have any way of making small bales, the horses won't be getting this; it's much too rich for horses to have full-time access to.  Hopefully we can buy some big bales of grass hay for them this fall.  If worse comes to worse and we end up giving them this hay, we'll be peeling off hunks of it and throwing it over the fence to them so they don't get too much.
One of my readers cautioned me to be sure and continue taking my coumadin:  Don't you worry, I follow doctor's orders as closely as possible.  The only little misunderstanding I've had so far was during my first few days home after surgery when the home therapist ordered me to take two hydrocodone tablets every four hours.  When Dr. Strong found this out, I thought she was going to blow a fuse.  "'Take as needed' is on that label for a reason," she said.
A different therapist, a lady, came last Monday, and I told her I must have misunderstood the regular guy.  "No," she said, "we want our people taking two tablets every six hours so they won't be in too much pain to do the therapy exercises."
I told my doctor this, and she couldn't believe it; she said she never heard of anyone being told to take that much hydrocodone.  Truth be told, I couldn't tell any great difference in pain levels after I cut back, and I did cut back a lot... from eight a day to three or four.  I mainly take one when I go to bed now, and one in the early morning hours if I wake up hurting.
Anyhow, it would be nice if the therapists and doctors could all be on the same page.
I was recently asked what I'm reading:  I finished "The Foremost Good Fortune" a few days ago, and have just started reading Meredith Baxter's memoir.  Obviously, I still lean toward biographies rather than fiction.   I'm still loving the fact that I can check out library books on my Nook, right from the comfort of my own home.  Free.
Posted by Donna. W at 4:06 PM

Email ThisBlogThis!Share to TwitterShare to FacebookShare to Pinterest
Labels: haying