Cliff was born in Versailles, but he was raised in Kansas City.  He went to Kansas City schools from first grade on (many, many Kansas City schools) and he still lived in Kansas City when I met him.
These days, he'd rather have a root canal than go to Kansas City.
Last weekend, Sea Life opened up at Crown Center, and I've had a hankering to go check it out.  It was cool and rainy this morning, so I suggested to Cliff that we spend the day at Crown Center.  What else are we going to be doing on a rainy day?
He was less than enthusiastic, but finally agreed.  I saved $5 per ticket by purchasing them online:  I love a bargain!  Our tickets were to give us admission between noon and 1 o'clock.  I decided we should make it a real date and eat at Hiboy's on the way to Kansas City;  we used to eat there sometimes when we were dating.  So I printed off an Internet coupon for a free sandwich. 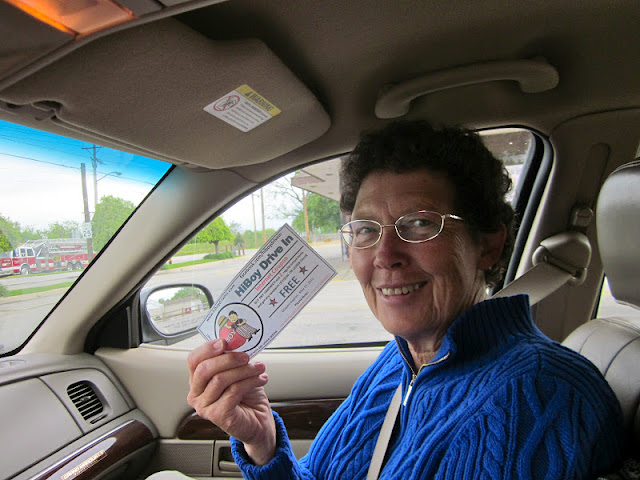 Cliff always worries about carjackings and such in the city.  Because we were on 24 highway in Independence, the GPS did take us through some neighborhoods that weren't exactly savory, but I really enjoyed the sights, once all the car doors were locked.
We drove through a several-block area that seemed to be mostly Mexican.  All the business names were in Spanish.  The church signs were in Spanish.  You may be wondering what the big deal is about this, but it was fascinating to me because it's something I never see.
Facebook friends had assured me we would not get attacked, kidnapped, or carjacked, and that the parking facilities at Crown Center are safe and secure.
That isn't the half of it!  Not only are guards patrolling the place constantly, but there are cameras watching every nook and cranny with a couple of people watching what's going on at all times. 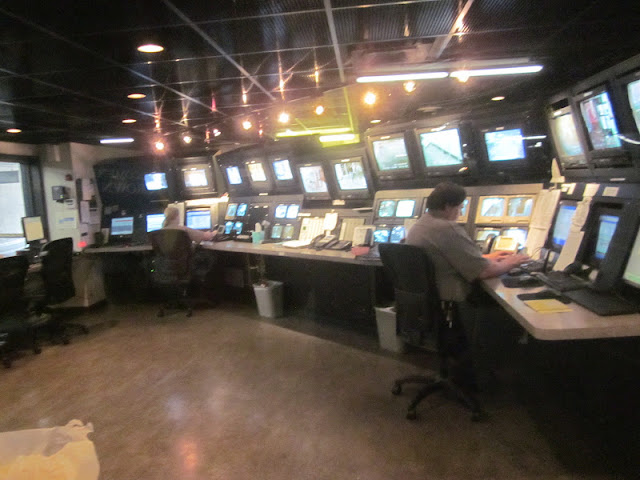 I have to say, we met up with the nicest people on our little adventure.  For instance, we didn't have any idea where to go from the parking garage.  We went to an elevator and were standing there discussing whether we should go up or down.  The elevator door opened and the man inside said, "Are you going up?"
"We don't know," I told him.  He asked where we wanted to go; turns out we were already on the proper level.  We just thought it was so nice of a total stranger to give us directions.  Don't let anybody tell you Kansas Citians can't be friendly.
We had wondered how much parking would cost.  Turns out you can get your parking ticket validated and it's free to park.
Goll-EEE, Uncle Jed.
There was a huge line of people waiting to get in at Sea Life, but those of us who paid for tickets online got to go right on in.
Honestly, Sea Life wasn't as big a deal as I had expected.  See, I have Internet friends near Washington, DC.  Joanna and Shirley took me to the National Aquarium in Baltimore when I was visiting.
Wow.
No aquarium could follow that act.
Still, it was fun to watch the sting rays and eels and colorful fish. 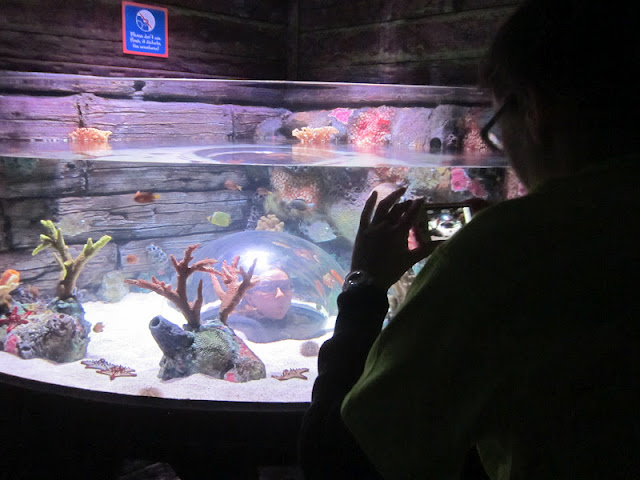 That could have been my head in there with the fishes, but I'd have had to crawl on hands and knees to get there.  No thanks.  You can look at this stranger and pretend it's me.

Cliff and I spent quite a bit of time watching the sting rays.

The jellyfish were pretty amazing, too. 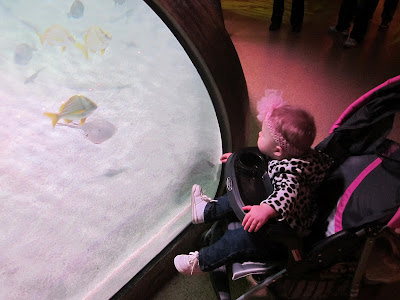 I have to tell you, kids love this place.  I'll bet my little great-granddaughter would enjoy it. 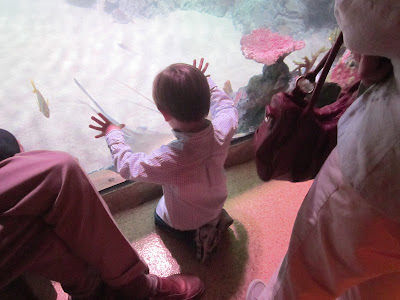 The kids we saw... and there were many... weren't acting bored or disinterested.  They were having a good time.
Many years ago my daughter took me to Crown Center, and I recalled her taking me to a Hallmark visitor's center.  Again, Cliff wasn't enthusiastic about this, but we went looking for it.  We went in a door where we saw nothing but restaurants and shops.  I guess we looked confused, because a nice gentleman asked what we were looking for.  I told him, and rather than just tell us, he led us upstairs, past many stores, down a long hall, and outside.  Then he pointed the way.
Yes, it was his job, but I felt he went above and beyond the call of duty.  I'm sure it was at least a ten-minute walk one way. 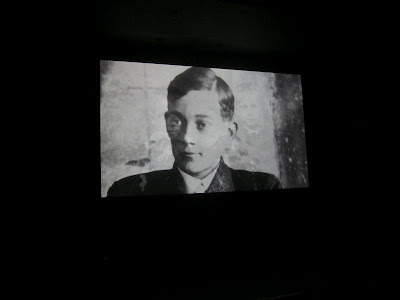 We watched a short movie telling how Mr. Hall came to Kansas City from Nebraska at the age of 18 to sell post cards, and later decided to cut out the middleman and make the cards himself. 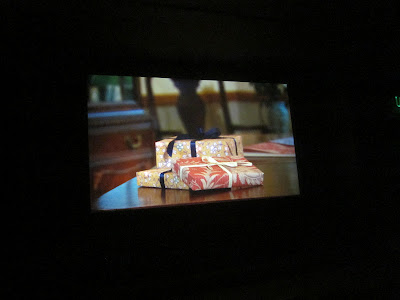 We learned that Mr. Hall invented gift wrap.  It's true! 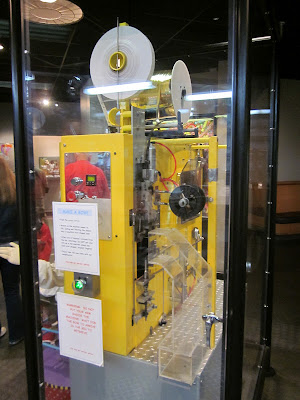 Cliff is always interested in seeing machines work.  This one will make a bow for you to put on your next gift.
Around the time we were looking at this, Cliff went into panic mode.  "Everybody will get off work and we'll be caught in rush-hour traffic!!!"
"What time is it?"
"Two-thirty!!!"
Please.  Everybody knows rush hour doesn't begin until 3:30.  However, we hurried things along a bit. 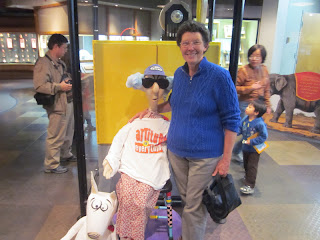 As we were leaving, I got my picture taken with Maxine.
Heading outside, Cliff finally found something that really caught his interest. 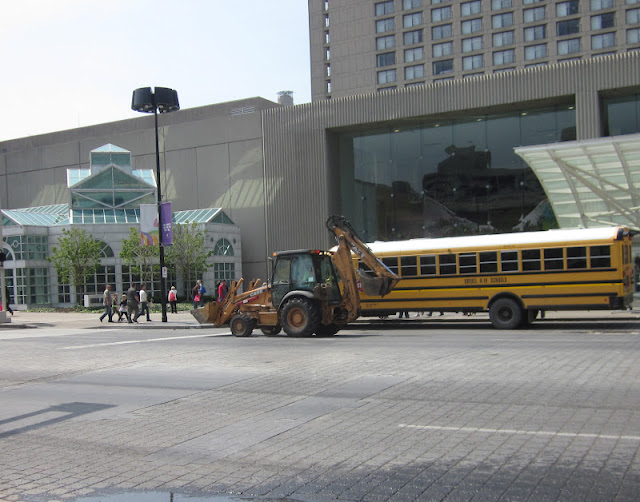 A tractor... of sorts.  He pointed out the low tire in front, and told me a few details about how backhoes work.  The man has never been to Crown Center in his life, but he's worried about a backhoe. 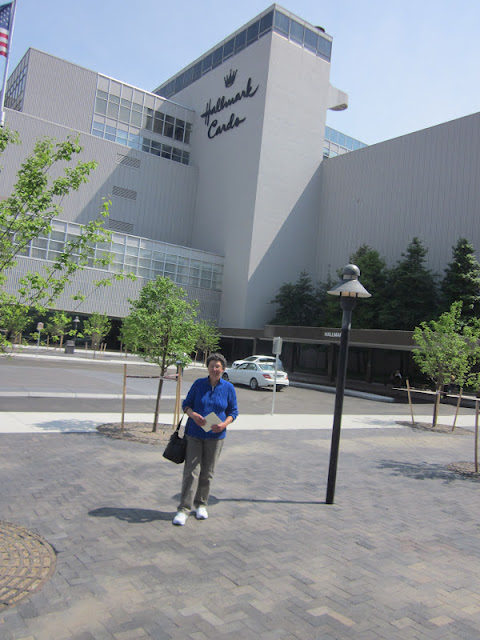 It's highly unlikely I'll ever make it back to this area, so here's a picture to prove I was there.


On the way home I realized it was happy hour at Sonic Drive-in. 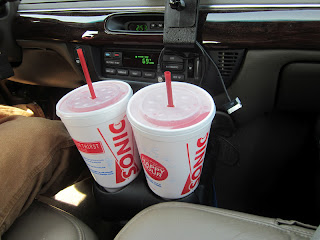 I told you, I can't resist a bargain.
It was a good day.