In my collection of Better Homes and Gardens cookbooks, the oldest one is from 1934.  I've been perusing it today, seeing how differently we cook now than they did back then.  Perhaps because America was in the middle of the Great Depression at the time, it seems as though spaghetti was a popular dish; there were many variations in the old cookbook, some of them added by a housewife after the book was purchased.  By the way, I'm pretty sure my mother never made spaghetti, although after we moved to Kansas City she discovered a box mix that had the pasta, a can of sauce, and a container of cheese inside... like this:


Mother worked all day in a factory assembling light fixtures, and this was something simple enough that her thirteen-year-old daughter (me) could make for the two of us for supper.  My dad worked evening shift at a cardboard box factory, so he wasn't there to eat with us.  Mother was tired at night, and very happy to get out of cooking. 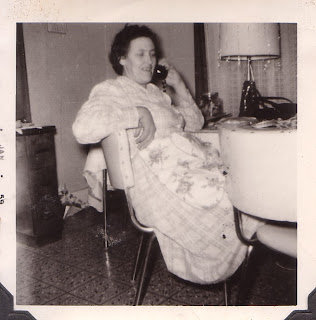 Besides, she had a lot of people to call on the phone.
As I was saying, my mother never made spaghetti in her life so far as I know.
I looked at the 1934 recipes for spaghetti and was amazed at the ingredients that were lacking. 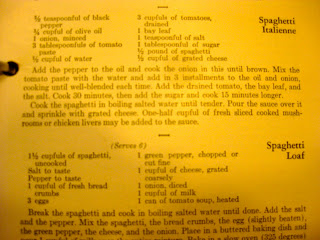 Where are the spices?  Where's the basil and oregano?  This looks like it would be the most bland-tasting spaghetti in the world; it doesn't even call for garlic!  Oh, and spaghetti loaf?  Please. 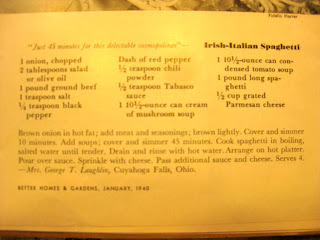 And here we have Irish-Italian spaghetti.  Why, that's almost like genetically engineering a half-dog, half-cat!  (Not that I'd be surprised by that, these days.) 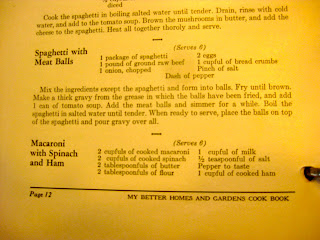 Even the meatballs lack any kind of spice.
No wonder Mother never made spaghetti; back in her younger days, spaghetti wasn't good.  Unless, of course, you were Italian and your family knew how to make the real thing.

Email ThisBlogThis!Share to TwitterShare to FacebookShare to Pinterest
Labels: spaghetti

Ha, on the Irish-Italian comment you made...Don always swore we'd make beautiful babies, but he never said anything about spaghetti.
~Mary

When my husband and I lived in northeastern Utah a popular dish of the area was a variation of the spaghetti loaf, made in a pie pan. Of course the region was largely Mormons that had settled the region in the 1860's, and nothing seemed to change.

Interesting as I too collect cookbooks...the older the better, as I believe you can learn much about influences, life and such from the recipes found.

I need all the spices and garlic!! I get the cooking channel now and Julia Child is on it. Her old shows. I still love her but we cook very differently now!

What makes the spaghetti even remotely Irish?! (I love looking through old cookbooks, too!)

I love spices, so I guess it's a good thing I wasn't around back then. ;)

I remember Chef Boy ar dee! The first pizza I ever had was from a mix of his!

I can remember getting the box Chef-boy-ardee spaghetti. Can't remember how old I was before I had home made sauce and spaghetti.