Early last summer while we were at Orscheln's, I bought a dwarf Golden Delicious apple tree that was marked down to $12.  It was rather late to be planting a tree, but as it happened, we got lots of rain throughout the summer, and the tree made itself at home.
Since it seemed to have done so well, I thought perhaps I should get some more dwarf trees so it wouldn't look so lonely.  A couple of months ago I ordered two more trees:  One Fuji and one Gala.  My favorites!  Fujis are late and Galas are early, so I thought it might give us a steady supply of apples each fall.
From what I understand, a dwarf apple tree only yields about two bushels when it's mature.  We'll see.
When I ordered these last two trees, I was told they'd arrive in November.  I also ordered three Heritage raspberry plants that I planned to put in the garden area, but later found out they can't be near certain garden plants.
Yesterday the UPS truck came by with my trees and vines.  Instructions told me to soak the raspberry plants' roots in water for at least an hour and the apple trees' roots for at least six, but no more that twenty-four, hours.
I soaked the berry vines and dug holes for them in the back yard near the fence.  It was rough going, because we haven't had rain in over a month.  But I got the job done.  In order for the apple trees to have their roots in water as long as required, I either had to plant them in the dark or wait until this morning.  I chose the latter option.
I awoke to the pitter-patter of rain, a welcome sound indeed.  Running out to the rain gauge, I saw we already had over a half-inch of rain; it was coming down slowly, just the way I like it.   It showed no sign of letting up.
Finally I put on my coveralls and a sock hate and slipped into Cliff's Muck boots (because it hurt my ankle trying to get into mine) and went out to plant trees.  I figured I could get the job done before Cliff woke up; that way he wouldn't feel forced to plant the trees for me.  It wasn't, after all, his bright idea to buy more trees.
The coveralls and stocking hat were soaked through by the time I finished, but I got the job done.  At least it had rained enough to make my digging easier.  Now all I have to do is wait for spring and watch for buds that will tell me the trees lived through the winter. 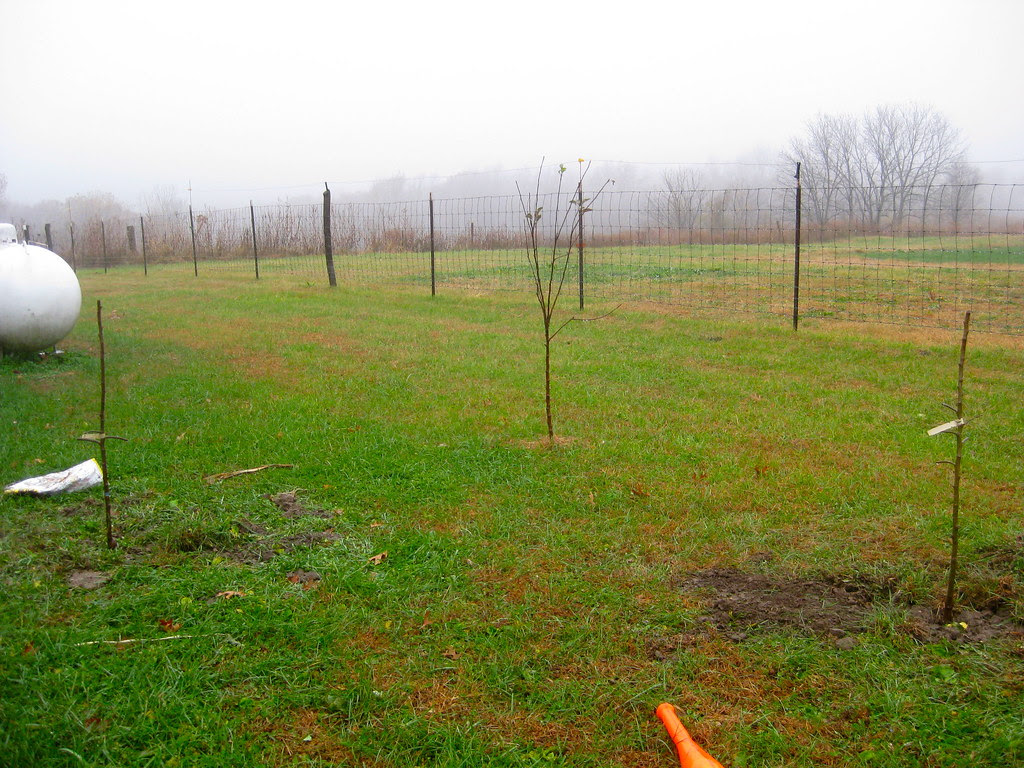 There's my little apple orchard.
Posted by Donna. W at 9:28 AM

Sounds like you will have some good eating later. We had a really dry summer. Hardly any rain at all.
Enjoy your weekend now that you have your trees planted. Helen

Donna, now you make me want to plant an apple tree! I really don't have room. But I think I am going to try some blackberry bushes. Karen

Karen, dwarf trees don't get very big, and can be planted 8 feet apart.

That is great and I hope they all grow and you have lots of apples.

I would love to plant a Red Delicious (my favorite), but meh....they need a cold winter....not the sad excuse for winter we have here...

Will you have a problem with deer eating your saplings? I see a big fence in the background so maybe not!

I love to see fruit trees planted in a yard. It's sort of like a garden, one waits for the fruit to appear. Enjoy :)

Notes on this entry:


2) how about that rain yesterday, huh? Wasn't that beautiful? After such a gorgeous, if dry, brilliant, long-lasting Autumn that seemed to run from Labor Day until Thursday, with all that sun, the rain was sure welcome, wasn't it? Most everyone I've spoken with--I'd almost bet you'd concur--said it was the most beautiful Autumn they could remember

3) after reading further, I decided you meant "sock hat"