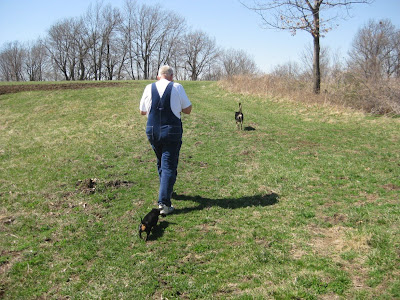 Cliff and the dogs on our walk today

We had intense winds last night, and this morning the roof was missing several shingles. Cliff called the insurance man, so we'll see what can be done. Whether they help or not, we'll need to re-shingle. Thank goodness for our various emergency funds!

Cliff got out of his chair this morning and his sister's dog, Angel, immediately jumped up into it, as is her habit. He came back about ten minutes later and, not seeing Angel, sat on her. She yelped and he jumped up really fast, scared he'd killed her. As it turns out, all he did was hurt her pride, and she refused to have anything to do with him for about three hours. When he began eating dinner, though, she decided it would be wise to forgive him, since he tosses her a crumb from time to time. You can see in the above picture that she was right at his heels on our walk this afternoon.

Speaking of dinner: The neighbor across the highway brought us a nice mess of catfish this morning, so that's what we had. I opened a can of Popeye spinach (because I like to think that balances out the unhealthily-fried catfish). As I was eating mine, I encountered a foreign object, spat it out and examined it, and figured out it was a piece of wood about an inch long. No big deal, really. Except I'm a bargain biddy and I know, by past experience, that if you let manufacturers know about things like this they are liable to give you some coupons. So I went to allens.com and told them all about it. I've already received notice in email that I'll be getting some coupons.

In the garden, both the yellow and red onions are up. Radishes and cabbage also. And of course lettuce and peas planted on February 10 are doing well. I get a kick out of hearing people in my vicinity say, "Oh, I could never plant those things that early; they'd freeze!"

Every time we get a storm with lots of wind we wind up replacing a couple of shingles it seems. Our deductible on the insurance is 1000.00 and it doesn't cost that much. So it comes out of pocket at least once or twice a year. We can count on it. The roofer suggested that maybe it was time for a new roof and I told him with all the shingles we've replaced over the years, we should have a new roof. It seems the orginal shingles were not put on right and that is why we have such a problem to begin with. Insurance seems to be good for me only if something major happens.
Thankfully, I've not had to try that yet.
'On Ya'-ma

The last wind that blew this way tore some siding off my house...and the insurance said basically to just fix it myself. :-( Which I did...well, my sil' s friend did.
Glad the pup is ok except for her pride.
love,
carlene

They can say anything they want, but your vegetables are growing well and are making you happy. That's what counts.

Have more wonderful days and walks.

You have my garden bug going donna.....it is still way to early here...lol
loopy who says T T

Oh, too bad about having to work on the roor, but I guess, no home in immune. We've been having plumbing troubles and fortunately Dave has been able to handle them.

Gardening ... I've been out cleaning the flower beds for a few days ... an hour a day gets the job done and I'm happily anticipating the perennials that are already popping through. No green grass yet. Still have mounds of snow on the property.