I was in the sixth grade when we left the farm where Daddy was a hired hand and moved to Kansas City.  I cried for weeks, perhaps months, for my old way of life.

I'd been a free spirit there, after all.  Mother worked all day in a dry goods-grocery store, and Daddy was busy with farm chores.  I could play with the calf in the barn that belonged to the cow Daddy milked twice a day.  There were kittens in the same barn.  I watched setting hens hatch out their babies.  In May, I found wild strawberries along the roadside, and in July there were blackberries, back in the woods.  I was in heaven, and nobody bothered me at all.

Daddy shot my old dog, Cookie, before we moved to the city.  She had a huge tumor on her belly that dragged the ground, and she was at least ten years old.  I remember hearing the gunshot.  It was a mercy-killing, but it was rough for me.

We got an apartment in Harlem, an unicorporated village just across the Missouri River from downtown Kansas City.  I had cousins nearby, and that helped me make the transition from country to city.

Most people, when they hear "Harlem", think of New York City.  Well, Kansas City's Harlem was all white folks, but it was a very poor neighborhood.  There were times I felt unsafe on the school bus.

However, I found some pleasant diversions in Harlem. 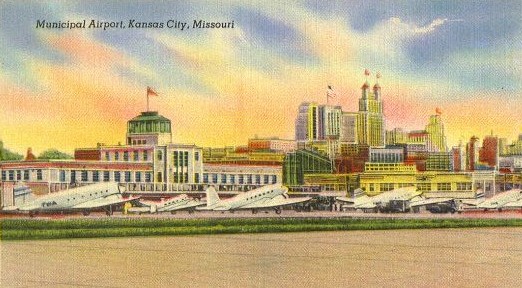 Back then, the big airport in Kansas City was the Municipal Airport, and it was only a few blocks away.  Every time a plane took off, it messed up our TV reception.  In summertime, I'd walk down there and watch airplanes taking off, and dream about the romantic places they were headed.  Me and my mom once met Pat Boone's plane when it landed, and on the front-page picture in the Kansas City Star, you could pick out me and my mom reaching toward Pat as he got off the airplane. 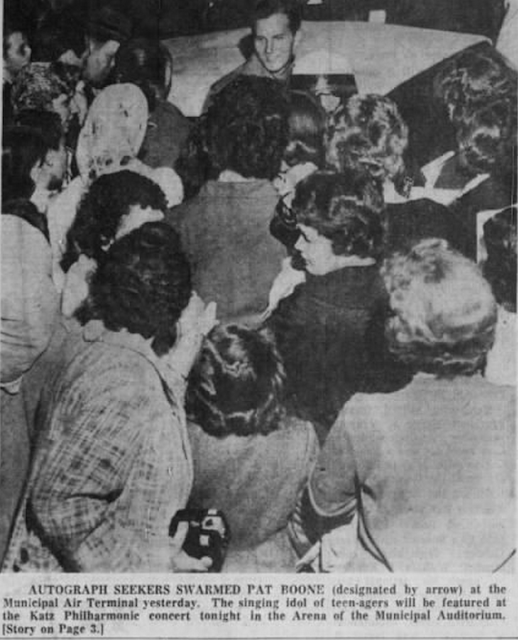 The lady in the left-hand corner, foreground, is my mother.  Her head is covering up my face, but that's me on the left in front of her.  You can see Pat Boone clearly in front of everybody.  She is holding my camera because I had hopes of getting close enough to Pat Boone to have a picture taken with him.  Fat chance!

And then there was the levee.  I'd go up there, walk right down to the riverbank, and watch the strange (and sometimes nasty) things floating past.  I could go right up to the ASB bridge and climb steps that took me to the top, where cars whizzed by.  Below, you see my father leading me and my cousins down the river side of the levee.  I went down there alone, many times.  That's the ASB Bridge in the background.  Back when this picture was taken, it served cars and trains.  Now it's only used by trains... I think. 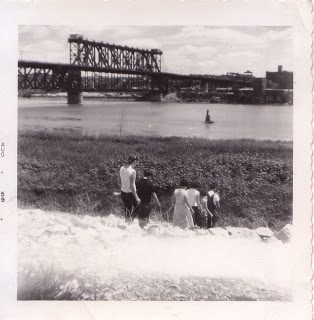 Underneath that bridge I'd see evidence of the places where hoboes had camped:  traces of campfires, whiskey bottles, and sardine cans (now I find out sardines are one of the safest seafoods to eat, because they are at the bottom of the food chain). 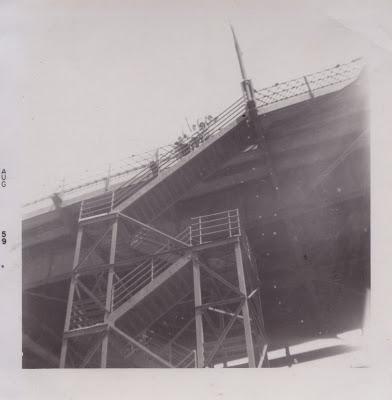 That's some of my Allen cousins.  I loved to go up those steps to where the cars were zooming across!  There was a sidewalk all the way across, and I suppose when the bridge was built in 1911, a lot of people walked across to downtown Kansas City.  Mother and Aunt Ruby did that once.  I thought it was great fun! 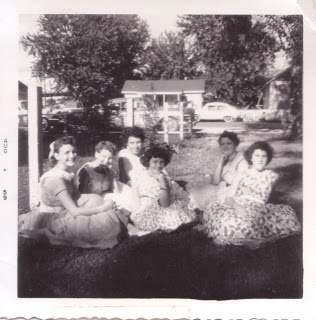 These are some of my Allen cousins (my dad's side of the family).  They spent a week with us, shopping for school clothes.  We all had our new can-can petticoats on.  You gotta love the 50's!  This was our yard in Harlem, looking across the street.

My parents became home-owners in Harlem, then sold that house and escaped as soon as possible to "Kansas City, North".

Isn't it strange that I can have so many good memories of such an impoverished place?