We waited until 10:30 AM yesterday to drive the 15 miles to Oak Grove Walmart to pick up Cliff's prescriptions; we'd heard some of the back roads were still treacherous, but we didn't have any trouble.  We went to the bank to get our cash for the month, since the bank is just across the road from Walmart.  Cliff was having so much trouble breathing, he said we'd go on to Costco for our glasses, but we'd just get them and leave.  Since he could barely make it to the garage, I didn't think he could have walked all over that big store.  It was noon when we departed Walmart, so we went to PT's for a tenderloin sandwich, which we split and ate in the car.  It's a great place to eat.  From there, on to Costco.

We saved thirty cents per gallon on gasoline at Costco.

Cliff got a different kind of inhaler, as well as steroids and an antibiotic.  It was probably the steroid that had him feeling better by evening.  Today he can breath much better, but he tires easily because he hasn't been about to breathe for so long; that keeps him from doing anything.  He went out to tackle the world this morning and came dragging back to the house wondering what happened.  Now he's at the shop again.  He is very happy to be able to breathe!

I read that 58% of asthma cases are inherited:  Cliff's youngest sister has had it most of her life.  His half-brother, Phil, has had it for at least fifteen years.  His Aunt Gertrude suffered with it for her whole life and was in the hospital several times a year toward the end of her life.  Cliff's mother died from asthma:  She couldn't get her breath lying in bed, so she would sleep in her recliner, which is where she died, still in her sixties.  She was working for the widow of a doctor in Oak Grove, living with her and caring for her.  I think maybe they were taking care of one another, really, but his mom was the one getting paid.

For quite awhile, we've used someone else's Costco account.  I had my own card, with my picture on it, but it was given to me by a former co-worker because she had one Costco card she hadn't assigned to anyone.  That was wonderful, because I didn't have to pay that yearly fee.  We used it to get Cliff's previous hearing aids and our glasses.  This time, though, they've changed the rules; you have to be paying for your own membership to get those perks.  So in order to get his hearing aids at Costco, we had to get our own card.  Believe me, it was worth it, considering their hearing aids are $1,800 instead of $5,000 like they are so many places.  My Russian Jewish friend on Facebook was the one who told me about their hearing aids and glasses.  He's saved us a lot of money along the way.  He also cost me some money once.  I had always wanted to travel by train, and... well, let's say he encouraged me and told me some of the ins and outs of train travel.  For our fiftieth anniversary, Cliff and I rode a train to the Grand Canyon.  It was a once-in-a-lifetime experience.  If I played the lottery and won, I would take the train from Chicago to California.  That won't ever happen, but I can dream.

Cliff paid quite a bit for his first hearing aid, and it was only for one ear because he was too deaf in the left ear for a hearing aid to help.  He got the cheapest one they had, and hardly ever used it because it picked up background noise, but it didn't help him hear people talk very well, especially in a crowd where everybody talks at once.  He said it sounded like a chicken house to him.  Then he went to Costco for his next one, which worked much better.  They still couldn't do anything for his left ear.  However, he actually used this one.  It worked, and he could push a button to help with the background noise.

It got to the point his hearing faded again, so he went back to costco and they turned it up for him.  Not only that, but technology moves so fast that they now had the ability to get his deaf ear working with a hearing aid!

After three years, they couldn't upgrade it any more.  But the new ones are better yet, and he can hear people on the cell phone now because these connect via bluetooth.  It's a miracle!  When he lost so much of his hearing, I figured he'd finally get so deaf that a time would come nothing would help; instead, the hearing aids keep improving faster than his ears are fading, and he's hearing so much better.

I do have great good news!  The Kansas City area Covid numbers are dropping by 50% every week lately. 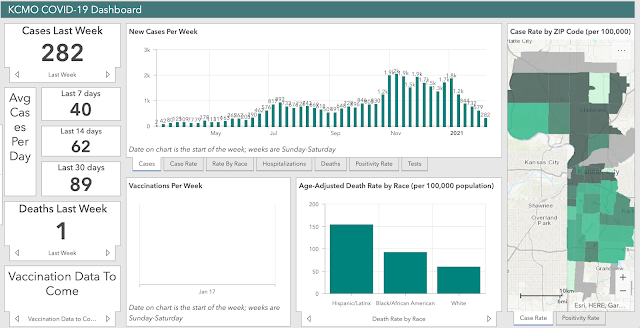 The temperature is 29 and is supposed to get down to 14 degrees.  The snow is melting like crazy already.

Is that Spring I smell around the corner?