Of cats, worms, and pajama bottoms

Blue, the cat, spends a lot of time in the house, sleeping.  He is the first cat Cliff has ever allowed in the house.  When that silly cat decides to play, he cracks me up with his adventures.  There's a feather that hangs from one level of his "cat-tree" in the house, and when he gets going on that thing, I don't know how it manages to survive his cruel tormentings.  He likes to take the occasional nap at the tip-top of his tree, shaky as it is up there.  He uses the posts on that thing for scratching, so now he leaves the furniture alone. 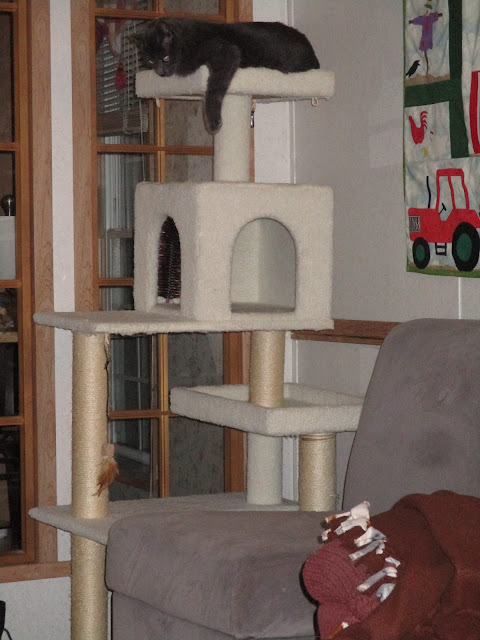 We took Blue to the vet today.  I saw a little white thing on his butt that looked like a tiny piece of yarn, but I think it was a segment of a tapeworm.  I called the vet's office and told the lady who answered the phone about this, asking if they could give him something for tapeworms.  They certainly can, she said, but if he's an outside cat, you will never keep him worm-free if he hunts mice, because the fleas carried by mice are the cause of the infestation.  I told her he's an outside cat, but he also comes inside a lot, and that's the main reason I want to do something about it.  I took him this morning, and talked to the vet about it.  He said if it were his cat, he'd just worm it once a year, so they didn't cause too much harm to him.  When the vet's helper asked how old he was, and then weighed him,  he said, "He's a lightweight."
Probably he doesn't weigh as much as he should because of the worms using up his food, I imagine.  He eats a LOT; during the day he has dry food out at the barn, then he gets a full can of his wet Friskies in the evening; and on a good day, he eats a couple of moles from the pasture.  By the way, the stuff they put on his back to kill tapeworms also kills any other kind of internal parasites.  So maybe he'll have a growth spurt now!
A couple of weeks ago, a funny thing happened to Cliff.  I was almost ready for him to take me to church, and he got off the couch saying he'd change into his overalls.  He was wearing lounge pants and a sweatshirt, and I told him there's no need to change clothes just to drop me off two miles away at the Methodist church.  "People go to Walmart wearing those pajama pants," I told him.  "Just once in your life, wear what you have on, because you're going right back home anyway and won't be getting out of the car at all."  For once, he listened to me.
He stopped in front of the church, I put on my mask, got out and started up the steps to go into church when Cliff honked the horn.  I turned and looked, and he motioned to me to come back to the car, which was still running.  This is a practically new car we leased from Honda last year, so you don't put a key into a keyhole to start it.  If the key is in your pocket, you just push a button and the car starts.  Cliff's key was in his overalls pocket at home!  Although the motor purred contentedly, there was no going anywhere without a key in the car somewhere; it sensed my key on the way there, so when I got out of the car, he couldn't leave.
As it happens, I've always carried the extra key to any vehicle in my purse, even though I've never driven.  So I gave him my key and saved the day; but from now, on I'm sure he will never leave home in lounge pants again.
We have a wonderfully sunny day right now, and at some point I intend to go for a short walk with Gabe-the-dog and Blue-the-cat.  I've already put in my 30 minutes on the recumbent bike.  It's gonna get cold over the weekend and beyond, people!  Get some sunshine while you can.
Yours truly,
Donna... from Missouri.
Over and out.