I was shopping in my deep freeze for something to fix for dinner (noon meal).  My wandering eyes happened to land on a package of sliced ham left over from our Christmas ham, and I asked Cliff, "Would you rather have ham salad sandwiches, or a warm ham sandwich with cheese melted on it?"  He chose the latter.  Either way it would have made an easy meal, and I didn't care which he chose... although I do love melted cheese.

A longtime reader of my blog who lives in Canada messaged me yesterday asking if I'm still practicing left-hand writing; I am, but I am not practicing as often as I should, so although I'm improving, I really should be improving faster.  As it happened, though, I had followed the dotted lines and colored the picture in the workbook (for five-year-olds) yesterday.  Yes, I follow the dots, then color the picture.  I always hated coloring.

Back to my Canadian friend:  She had come across something that she thought I might like to use for my left-hand-writing practice:  It's a 28-day devotional plan geared toward love (Valentines Day approaches); the preacher in charge of this suggests people will get more out of it if they not only read the verses, but copy them down each day.  So yesterday and today, I did copy the portion of the day.  I'll post what I copied here so you can perhaps tell whether I'm getting any better.  I put a check-mark at the beginning of the next-to-last line because I miss-copied one word:  I should have written "God" but I wrote "he".  The meaning is the same, and I didn't want to scratch out "he" with the pen, then insert "God" after that, because that would make my attempts at writing look terrible.  Maybe I should stick with pencils; they come with erasers. 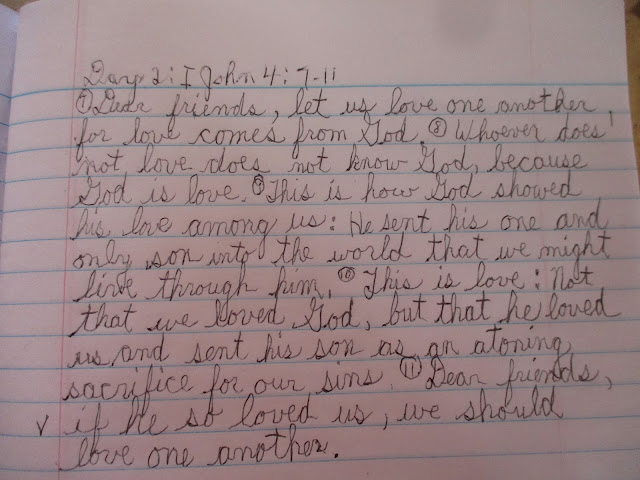 However, in the interest of improving dexterity, flexibility, and strength in my left hand, I color.  I bought myself a box of 20 crayons first, but once the point is worn away, it's impossible to stay in the lines because the pointed end of the crayon is too fat!  So I ordered some of those "gel pens for adult coloring books".  They were reasonably priced, but using them to color is like trying to color with an ink pen... although they are still good for increasing dexterity, I'm sure.  I only wish I liked to color.  I just lack patience; I like to get something done and out of the way!  Or, you know, figure out a way to get out of doing it; I'm good at that.

Mama Kitty is off her feed:  She ate about 1/3 of her wet food last night.  Normally I don't feed her anything but dry food until 4:30 PM, but I wondered if she'd eat this morning, and gave her a little wet food.  She ate about half of it.

I called the place in Lexington where they are giving the covid shot and left our names, and she had told me she would call when they could take us.  Well, yesterday the lady called and had a time for both of us to come; wouldn't you know it was exactly the time when we will be in Independence getting our eyes tested at Costco.  So I declined.  She said she'd call when they get some more vaccine in.  I think those shots are soon going to be much easier to find, though.

I'll soon be making our ham-and-cheese sandwich, so I'd better quit blogging and get us fed.  I made banana bread earlier, so that'll be dessert.

I am eagerly looking forward to the Super Bowl.  It could go either way, but I sure am hoping for my Kansas City Chiefs!

Keep warm, my friends.  A large part of the country is going to be very cold for the next week and maybe longer.  It will pass, and we'll be planting gardens before you know it.