This is an old post, copied and pasted from my old blog that has been deleted.  I found my deleted blog by going to "Wayback Machine".  So the one aunt I mentioned who was alive when I wrote it is, of course, not living now.

My mom saved things.  Not useful things with monetary value, but "keepsake" things that reminded her of pleasant times.  Letters by the score; an old candy bar wrapper and a chewing gum wrapper given to her by some beau; even some guy's cigarette that had been drowned in horseplay as a bunch of youths were cutting up and having fun (the tobacco long since disappeared, leaving only the paper with a burnt edge, but it's in an envelope with writing on it that tells the whole story).  Mother passed away early this year, and I've rather enjoyed looking at things she saved.

One of my favorite things out of Mother's store of keepsakes is her autograph book.  I think she may have gotten it for Christmas in 1931, since the earliest dated entry is from late December, 1931.  Some of the names are only familiar to me because I heard Mother speak of these folks fondly as old friends, through the years.  Some would eventually be her inlaws, like this one: 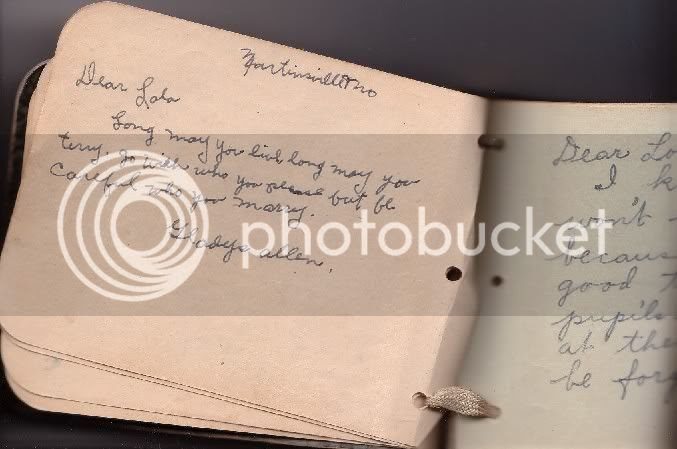 That's my Aunt Gladys (one of my few aunts still living), my dad's sister.  All my mom's siblings had an entry.  Here's one from Uncle Carl, who passed away last year: 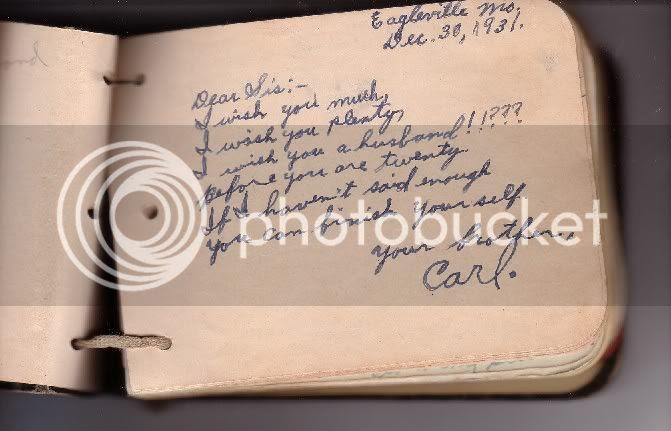 But here's my favorite, and if it weren't for the familiar, left-handed scrawl, I wouldn't know it was the man my mom ended up marrying in December of 1932... my daddy.  For some reason, he only signed his initials: 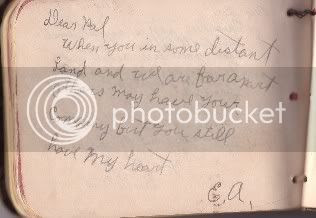 It's history!  Maybe only my history, but it's precious to me.  And some cousins at Sunday's reunion asked me to scan some pages for them.  Which is the reason I am sharing them with you.