Back around 1980 or so, Cliff's sister divorced her then-husband.  His brother worked in Alaska, and at some point he gave his brother and my sister-in-law some keepsakes.  Cliff's sister ended up with a couple of those and passed them on to me, and that's when I found out it's possible to fall in love with a stocking hat.  Before I show you the picture of me  wearing the hat today, I'll show you this one that's as old as the hat, so you will know I didn't always look like an old hag.  I was no beauty; I've always had dark circles under my eyes and ugly teeth, but I wouldn't mind looking like that now.  I wouldn't mind having the dog back, but she's crossed over the rainbow bridge. 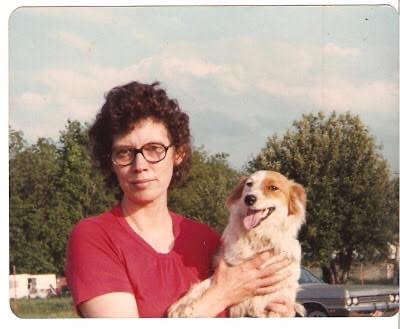 I got this dog, Suzie, from the same sister-in-law who gave me the hat 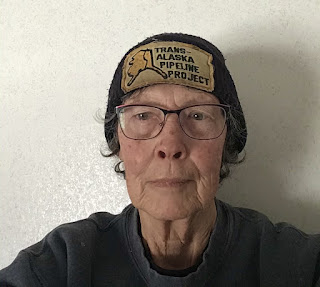 Yes, this has been my favorite hat for over forty years, and it's still not falling apart.  I used to call it my lucky hat.  I've probably gone on enough winter walks in that hat to have walked across the state of Missouri and back; when I was milking, I'd lean my head into the cow's flank, and the hat kept my hair from smelling like a cow, as well as keeping me warm.  Cliff  has a Carhartt hat now that he prefers.
So why am I talking about the hat? 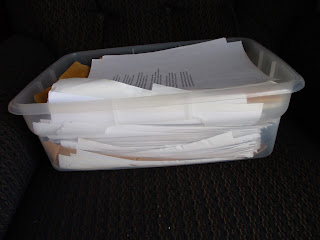 This is a box full of poems I haven't looked at in perhaps five years.  Around the year 2000, and for the next few years after that, I printed off every poem I wrote and saved it; I was attempting to write a poem every day (some were really awful).
For the last two days I've had the strongest feeling that I needed to look through the poems in that box.  I found one I'd written about the Alaska hat, right on top, and didn't get any further.  I don't think that's what I was supposed to look for, but .  I would have looked further, but I thought I could use it for a blog topic, and I needed one today.  I've omitted one verse, and it's the funniest part of the poem.  But there are personal things in it my sister-in-law would kill me for sharing on the Internet.
MY LUCKY HAT
March 6, 2004
Donna Wood
It's just an old, black stocking cap that I've had now for years.
The weave is thick; it fits just right, and covers up my ears.
It says "Alaska Pipeline Project" on a yellow patch.
Although I've searched for ages, I can never find its match.
It's not at all becoming, but it's comfortable and warm.
I've worn it out to milk the cows through many winter storms.
I've owned the thing through thick and thin, through skinny and through fat,
And I am quite attached to it.  I really love that hat!
When spring arrives and I put my beloved cap away,
Then fall approaches, and I've often felt a deep dismay
Not knowing just exactly where I put the thing last fall,
But knowing I MUST find it, or I can't go on at all.
It's funny how a silly hat would mean that much to me.
No other cap would feel the same or have such history.
I can't explain my fondness for the hat, or tell you why;
I only hope it doesn't fall apart before I die.
Posted by Donna. W at 4:33 PM