A commenter made my day.

I wasn't quite feeling up to par the last couple of days; my acid stomach came back to haunt me.  It was my own fault:  I'm on Omeprazole full time, have been for a few years.  Every once in awhile I try to wean myself off it because of the side effects, which include difficult, burning, or painful urination (I have a history of UTI's); stomach problems (really?  I'm taking it for my stomach acid!); lupus; and a myriad of other problems.  I'd not taken one for a week, and the burning tummy was back with a vengeance.  I took two, waited the necessary 20 minutes and ate like I'm supposed to... just some soda crackers... and spent a miserable day.  Yesterday I took one capsule and felt a lot better.  Today I only took only one and I am back feeling pretty good.  I won't skip any days for at least a week.  They had me on 2 a day for a long time, and I'm just happy to be able to get by with only one.

A new visitor to my blog named Jim left a comment here about an old blog entry of mine; that comment is the very reason why I allow people like him to comment; many bloggers won't take that chance.  I rarely get spam in my comments, but I delete them as soon as I find them when I do.  It's worth leaving things open to all comers.   Here's the entry his Google search landed him on.  He left a link to a youtube video that had me smiling the whole time I listened to it.  I'm a fan of Arlo and Pete Seeger anyway, but this was just what I needed this morning.

Cliff's asthma is really acting up.  He's a typical man, so he tries to hide these things from me until it gets so bad he gets nervous about it.  He always thinks he can "wear it out".  That may have worked when he was younger, but at our ages, it isn't wise to put things off; he can barely walk out to the garage.  The last three days, his chest has been hurting, so I wouldn't be surprised if he has pneumonia.  We called the pulmonologist; he ordered prescriptions for an antibiotic and something different the for asthma.  When the back roads have had time to thaw a little, we'll go get the prescriptions.  Oh, and Cliff has an appointment next Wednesday that I didn't even have written down, so he can talk to the doctor about any issues.
So I've been doing any outside work, most of which is my job anyhow:  I've shoveled off sidewalks and porches and gone to the mailbox and made several trips to the chicken house every day.  Don't forget taking Gabe out to potty!  The temperatures are going up into the 50's next week.
While I was doing my chores today, I took my camera outside into the sparkly morning. 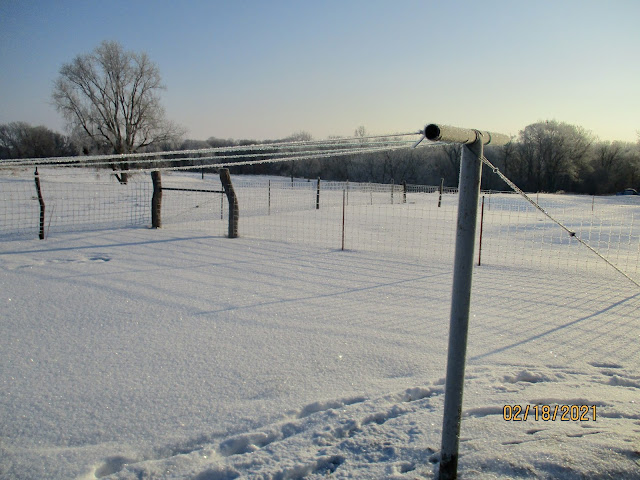 There are no clothes on the clothesline today. 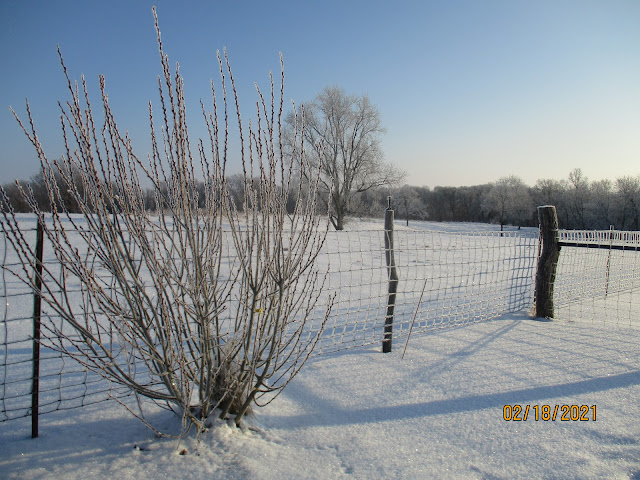 Here's the pussy willow my cousin Betty gifted me.  In the background is my "bodha tree" otherwise known as cottonwood.  Like the old song says in the movie "Tammy",  it really does whisper in summer. 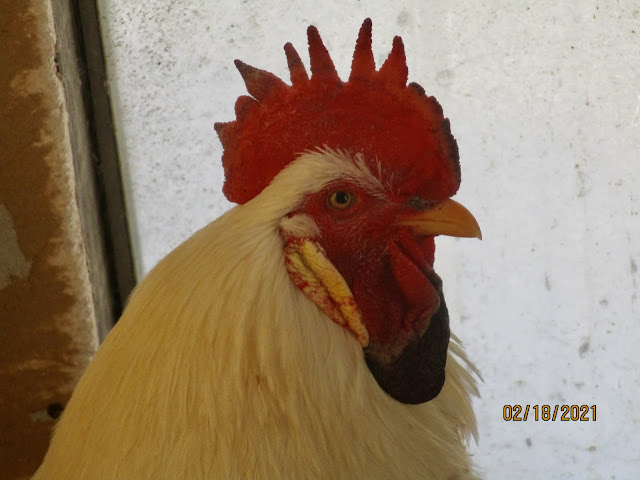 It doesn't show up as well as I'd like, but the bottom half of the rooster's wattles (the thing hanging down below his beak) is as black as can be.  It got frozen.  I'm wondering if that part will just wither up and fall off; I've seen slightly frozen combs on their heads before, but never the wattles.
Alright then, I'm outta here.  We're going to Walmart for the prescriptions.  Our new glasses are ready at Costco, but Cliff isn't sure if he can walk that big store, and he'd die before he'd be seen riding a mobility scooter.  Men!
Posted by Donna. W at 9:59 AM