Cliff asked me to choose him a new library book to read; he finally finished the one about  General Pershing right after reading a book about General McArthur.   Makes me yawn to think about such books.  I don't really mind choosing a book for him.  He would have no problem just browsing the library with the Libby app and picking something at random.  But he has specific tastes in books, so I will find a book, then check out what others say about it and how they rate it; this is how I find my own choice books, too.

Several years ago, I noticed a lot of people talking about Ken Follett's writing; one man on a message board I frequented was in the process of reading every one of Ken Follett's books, then he'd send it to someone on the message board when he was finished; I don't know why he didn't either check out a library book or keep the book to read again, if it was so great.  I figured with such a popular writer, I'd surely enjoy him, so I bought Pillars of the Earth on my Kindle.  I just couldn't get into it; I I don't know why, except that the setting seemed so bleak and depressing, and everybody was poor and miserable and building cathedrals..

But since I had already spent the money and owned a copy of the book, I offered it to Cliff, who at that point wasn't doing a lot of reading (he still had a job).  He devoured the book, raved about it, in fact.  I told his younger sister how enthusiastic Cliff was about it, so she read it and loved it too.  I always thought I should go back and give the book another try, but never did.  Oh, and guess what?  A while ago I wondered whether I had bought a Kindle edition of the book or a genuine book, so I checked the Kindle app:  there it was.  So, since Cliff had so enjoyed a Ken Follett book ten years ago, I though I'd find a book by the same author.  Normally, with a very popular author, you have to put his newer books on hold before you get to read them; the older the book is, the more likely it is that you will be able to check it out immediately.  Not so with Ken Follett.  Many of his oldest books still have to be put on hold.

I did well, though, choosing a book from 1992 that takes place in World War II, Night Over Water.  Cliff does most of his reading during the half-hour he rides the exercise bike.  Today I heard the noise that tells me Cliff was done with his 30 minutes, but ten minutes later he still hadn't come out of the room, so I went and peeked in there.  He was sitting on the bike, not pedaling, but reading... and he stayed there like that for at least another half hour.  He told me it's great, so maybe I'll just keep getting him another Ken Follett book until he's read every one.

For those of my readers who don't care about reading, here's a mental picture of my daily life with a dog:  Yesterday we settled in to watch the Super Bowl and I sent Gabe out to potty.  I knew I shouldn't have sent him out alone, but it was 7 degrees outside!  We burn our trash in a barrel that's seen better days.  It's not your typical burn barrel; it's used to be a big fuel tank, I think.  Eventually it fills up and Cliff has to pick it up with the tractor and haul it somewhere, even with the burning.  There's a hole in one end of the barrel near the ground.  If Gabe can fish anything out of that hole to eat, he'll do it.  I knew he was gone to long just to have peed and pooped.  When he finally came to the back door he had a burned package of some sort, about the size of my shoe, in his mouth.  I opened the door a little and made him drop it out there.  When he came running through that back door, a foul odor came with him, a smell that I cannot even describe.  The grandson was over here to watch the game with us.  We were all speechless, so I knew a bath was needed... it was either kill the dog or bathe him.  Cliff put the game on pause (should have just left it paused, the way it turned out) and Gabe got a bath.  But do you want to know the rest of the story?

He's had the worst gas of his life today.  The worst thing about that is that when it's cold, as soon as the furnace comes on, he lays on the register until it quits blowing:  This circulates the hot farts and sends them to my battered nostrils faster. 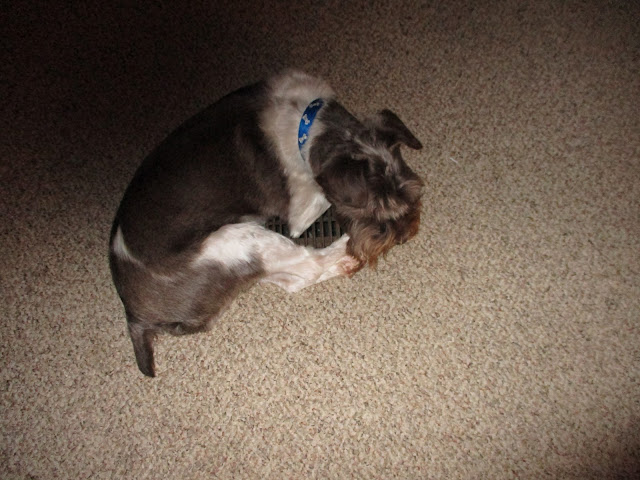