I'm out of my element

I'm messing with family trees now, which can be pretty dangerous:  I am hopeful of doing a family tree for my husband, as well as getting my own family tree done.  On my mother's side, my cousin Pauline has done an excellent job of investigating and has us going far, far back.  Thanks to WikiTree, I've found more information about my father's geneology than I've had before.

I know Cliff's mother's line (Silvey) goes back a long way, thanks to the fact I once saw a huge chart at a reunion in the Ozarks once.  The Silvey tree goes back to Charlemagne.  That impressed me greatly at the time, and I announced, "Hey, look at that!  Charlemagne is on there!"

Whereupon a distant relative made a racist comment insinuating ole Charlemagne might have been from Africa.  But I digress.

I somehow have created a daughter that never existed, and here's what happened:  I listed my daughter on my family tree, then also added her to my husband's family tree.  Suddenly I had two daughters named Rachel, born on the same day.  There is a merge feature, and I will eventually find out how to use it.

The reason I've never tried to do all this stuff is because it takes time to learn things, and I never want to take the time.  I was very happy to see a lot of relatives added to my dad's family tree immediately, simply because a second cousin has done one.  That is encouraging.

I did my DNA with Ancestry.com.  We are both about as white as people can be.  All these years I wanted to think I got my curly hair from Africa.

Here's what my DNA says about me: 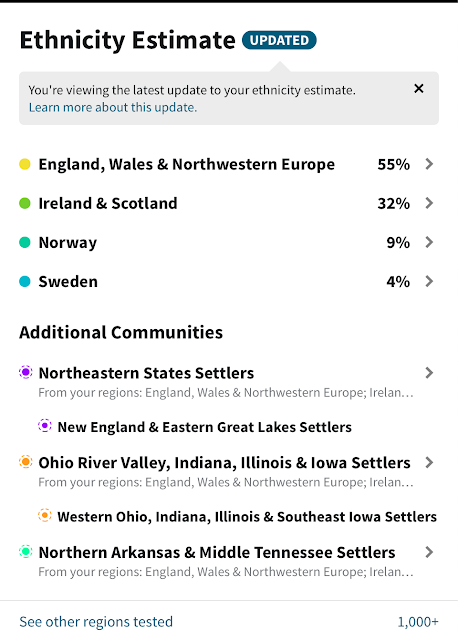 Wish me luck, and let's hope I get rid of my daughter's non-existent twin before long.
Posted by Donna. W at 8:48 AM