Just me, trying to keep on blogging

We went to Costco today.  I has a list of two things (ha), and one item to get for Cliff, but there's no way I can justify even going.  It's at least a 30-mile trip one way to that area of Independence.  butI just wanted to go and walk up and down the aisles.  Last week I told Cliff I wanted to go to Dollar General, eight miles away.  I should tell you that I've never in my life wanted to go to Dollar General Store, but that day I did.  I just needed to get away briefly, I suppose.

Of course when we walk the aisles at Costco, we spend more money.  We each bought something we didn't really need, and between us, we spent $30 on those unnecessary items:  A cheese assortment for me, and some kind of fragrance things to keep your car or tractor smelling good for Cliff.  My gift to myself was obviously the most useless thing I could have bought, with five pounds extra already on my body, but Cliff was right there whispering in my ear, "Get it, get it; you don't have that many years left to get stuff you want."  So here it is.  On the bright side, gas in nearby Buckner was $1.99 a gallon, but at Costco we only paid $1.84. 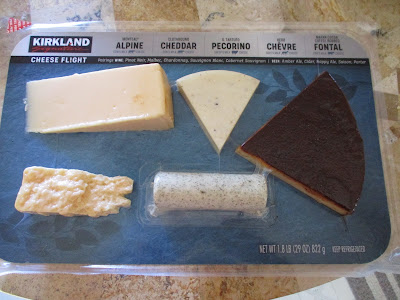 We do have company occasionally.  Cliff's oldest sister called him Friday and I listened to Cliff's side of the conversation.  I told him to invite Rena for dinner, since I was making turkey frame soup.  So she came over for awhile and we had a good visit.  Sunday our oldest granddaughter, Amber, came to visit again with her two dogs.  Gabe always enjoys other dogs visiting. 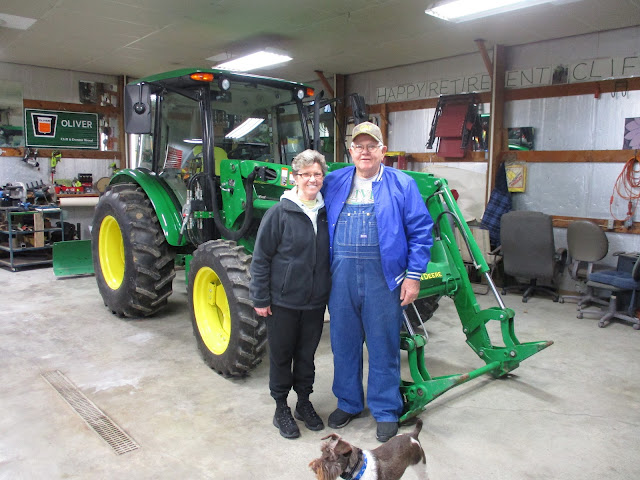 Cliff and his sister (and Gabe)
I noticed there is a terrible cold front coming into a large portion of the country next week, and it it's not going to be in a hurry to leave.  There will be single-digit low temps for six nights in a row.  The older I get, the more I understand why people want to go to Florida or Texas in the winter.
We watch TV every night.  We are watching "The Queen's Gambit" on Netflix, as well as Forensic Files.  Yesterday I saw online that Sundance channel is showing Roots for Black History Month, so I found that and set the series to record.  Cliff watched the miniseries back in the 70's, but I paid no attention to it at the time.  So we are watching it together this time, zapping the commercials, of course, like we do all recorded TV shows.  We are also watching one DVD each evening of the Country Family Reunion shows that were on for at least 20 years.  They aren't doing them any more because once people quit buying the DVD's, they were losing money on the show and had to stop making them.  It was time, anyhow, since most of the old-time country music artists have died. 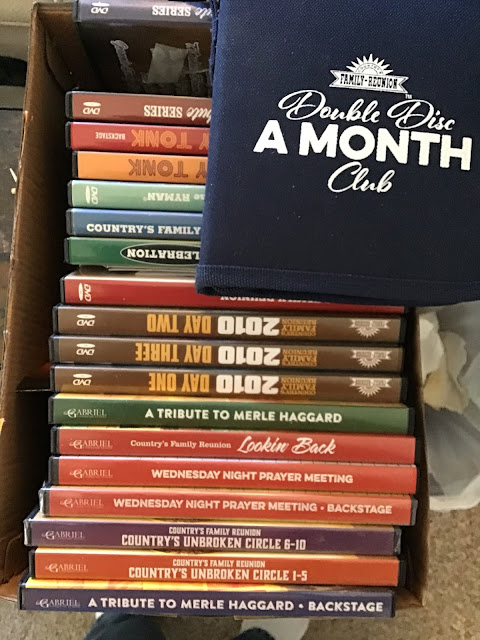 This is our shoe-box full of CFR DVDs.  Some of those DVD folders have five or six DVDs in them, so there's a lot of listening there.  We enjoy the conversations as much as the music.
We are both happy that PBS has a new version of "All Creatures Great and Small" on Sunday evenings.  We really enjoyed the original PBS version of those James Herriot books, and it seems the new one is just as good.
I'm scraping the bottom of the barrel to keep on blogging, but that's all I have for today.
Peace
Posted by Donna. W at 3:14 PM