This particular recipe journey had an interesting start:  Cliff and I were going on a road trip, so I checked out the audiobook version of a book entitled "The Best Cook in the World", read by the author.  Rick Bragg.  It's really a book about his southern heritage, about relatives long gone; but it's also a tribute to his mother.  Each chapter has, as its subject, a recipe or two.  Since Rick's mother never used a recipe, she and her son tried to come up with proper amounts and such, but the book isn't really a recipe book.  It's delightful reading.  Just don't read it hungry, because when Rick and his mother start describing things they've cooked, you are going to be hungry anyway.  The book makes everything sound delicious.  However, the one thing I knew I had to eventually try was the recipe for butter rolls.

The book starts in 1924:  a young boy just got married, and his wife cannot cook anything very well.  The boy gets on his mule and goes for a long ride into the wilderness to find his father, a hermit known as Jimmy-Jim, who knows how to cook.  This same Jimmy Jim is the author's great-grandfather.  The boy found his dad in a clearing, in a tumble-down shack.  The boy said to his dad, "You have to come with me, 'cause I married a pretty and hardheaded woman who can't cook a lick."

So the man cooked up a storm when they got back to the newly-wed couple's place.  One of the things that I knew I had to taste was what Rick Bragg's mother called simply "butter biscuits".  They deserve a much better sticky-gooey name than that, believe me.

There are two versions of the recipe in the book, one for from-scratch biscuits and one for canned biscuits.  Rick's mom is ashamed to say she ever buys canned biscuits, and this is the only way she uses them.  The first time I tried making this stuff, I ended up with a mess in my oven.

Why?  Because of the way the author wrote it down: 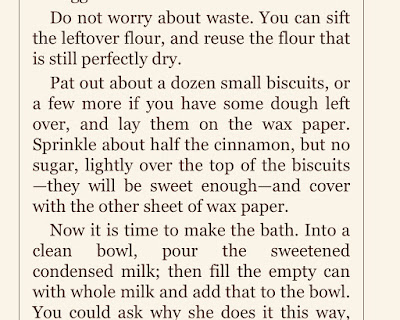 Notice in the last paragraph, where is says "then fill the empty can with whole milk and add that to the bowl"?  So, that would be one empty sweetened-condensed-milk can full of whole milk, right?  Unfortunately, I used the size pan Rick's mom suggested, and that sticky mess boiled over on the bottom of my oven.
Later on, when he puts a genuine recipe in the chapter, it's not a whole can at all; it's 1/2 cup of whole milk. 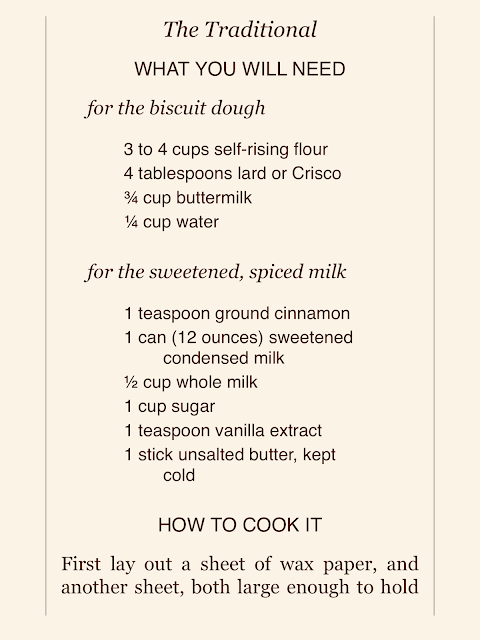 When I finally tried the recipe again, I knew what to do differently.  By the way, I used canned biscuits the second time, to make it easier.
It definitely isn't something you'd make often, and if you don't like terribly sweet things for breakfast, it isn't for you.  Cliff and I both approve the recipe, but it will be a rare treat.
With the new stove I got recently, I have been baking up a storm.  I finally got on the scale last weekend and saw I've gained five pounds.  This is typical of me in winter, but it's the sort of thing that I cannot ignore.  If I keep eating all those cookies, pies, and other treats, I'll be too big to squeeze out the door.  Something has to give.
Enjoy your day!  I hope the sun is shining on you, like it is on me.  My mood elevates considerably when the sun shines, even if I'm in the house looking out at it.  And did you see the full moon?  It was big and beautiful at 4 AM.