All it takes is the right recipe

My husband is a very easy man to cook for.  I used to tell people, "I can count on one hand the foods he won't eat," and then I'd name the hated foods:  yogurt, oysters, turnips, and black-eyed peas.  I could add grits to the list, but that's something I never cooked until the past couple of years anyway.
Since I discovered allrecipes.com, I seldom use my cookbooks except for the old favorites I've made for years.  I like so many things about that website!  First of all, thousands of people rate the recipes, so if you see a five-star recipe, you can pretty well assume it's going to be good.  Before you use the recipe you might want to read a few reviews, because sometimes there are corrections made to the original recipe that improve it:  for instance, I found the best banana bread recipe I've ever used there; however, the person who posted the recipe said to slice the bananas instead of mashing them.  Common sense told me that would not work, and comments confirmed that.  It's a five-star recipe, but if you follow it exactly, you're going to be getting bites of mushy cooked banana that aren't mixed in with the bread; at least, that's how it seems to me, and reviewers agreed.  Mash the bananas like you always do, and you will have banana bread that could win a prize at the county fair.
For years, I tried to cook creamed turnips that tasted like the ones my mother used to make.  I'd make a white sauce with a little sugar added (because when my mom made them, they were sweet), but they never measured up.  Then one day I surfed my way to allrecipes, put "turnips" in a search, and found Thanksgiving Day Creamed Turnips.  Bingo!  I followed the recipe and I was six years old again, sitting at the kitchen table eating my mother's turnips and asking for more.  Cliff agrees they are better that way, but he still doesn't like the smell of them cooking, so I get to eat them all.  What I'll do is cook a big batch of them, put them in the refrigerator, and eat some heated in the microwave every day until they're gone.  I do that with grits, too.
Since I mentioned grits:  Neither of us ever understood why anybody would eat grits.  Then I discovered CHEESE grits, and I was hooked.  I've tried various recipes and have a favorite one.  Cliff will eat a small serving of cheese grits now.  He's even asked for some a couple of times.  I found one recipe he liked best, but it isn't my favorite; it has eggs mixed in and is baked in the oven for an hour.
Every New Year's Day for years I've heated up a can of black-eyed peas for good  luck.  I'm not superstitious, but it's fun to pretend something might bring me good luck.  For several years I have made Ree Drummond's black-eyed pea dip, which both of us liked.  I would have made it this year, but when I went to our nearest small-town store, they didn't seem to have any canned black-eyed peas; so I picked up a bag of dried ones, thinking I'd cook a small amount for my dip and toss the rest.  But when I got up yesterday I decided to see if allrecipes had something different I'd want to try.
If you are a confirmed hater of black-eyed peas like my husband was, you are not going to believe this:  I found a recipe for black-eyed peas we both love, better-tasting than any kind of beans I've ever cooked in my life!  I halved the recipe, but I almost wish I hadn't now:  I could have put portions in the freezer for later.  There's plenty left for today, thank goodness.  We won't be making it in place of other beans because it is so full of unhealthy things, it ought to be against the law:  bacon, bacon grease, ham, butter... oh yes, this recipe is loaded with fat.  But I know what we'll be having on every New Year's Day for whatever brief time is left to us on this earth, and we'll talk about it often throughout the year.  You can find the recipe HERE, but I'm putting it right on my blog so I'll have it for future reference.  Please, all you haters... put your prejudices aside and just try the recipe once.  If Cliff took to it so well, I can't imagine anyone not liking it.  By the way, I did the quick-soak rather than soaking them overnight, and I only cooked them four or five hours.  Even that long seemed ridiculous to me, but since they came out so good, I'll probably keep doing it.
Dave's Georgia Black Eyed Peas
Enjoy and serve with cornbread.
Prep:
15 mins
Cook:
8 hrs 20 mins
Additional:
8 hrs
Total:
16 hrs 35 mins
Servings:
16
Yield:
16 servings 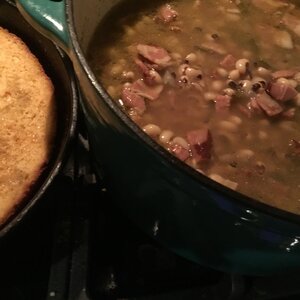