It's a new day

It was 32 degrees when I got out of bed this morning.  The weather guys and gals are saying this is going to be our nicest day for awhile, so we'll try to enjoy it.  Cliff has been spending quite a bit of time in the shop, cleaning up and straightening stuff and doing a little cleanup on both of his John Deeres.  I kid you not, my husband is seriously thinking of selling the tractor he just got (at a profit) and looking for something else.  "The thrill is in the hunt," he tells me.  Whatever.  I'm done getting attached to any silly old tractors, because he sells them right out from under me.

The cat is sleeping in his cat tree and Gabe is wired, trying to get me outside.  I do need to go to the chicken house and give them their slop (mostly burned toast and sour milk).  They will be very happy to see they have something they like today.  However, I'm bound and determined to write a few sentences of gibberish, just so I can say I did a blog entry.  (After typing these words, I realized Gabe was NEEDING to go out, so I burned the trash, fed the chickens, and took care of Gabe's needs too.)

Oh, here's something:  a picture of a little girl we used to babysit.  She's 8 years old now, but we remember her when.  I had baked a cake and let her lick the pan; yes, I know you shouldn't give kids anything with raw flower and raw eggs in it, but her parents were fine with anything we did with that child, and she survived our care, although she may have come out of it a little spoiled.  It's a wonder we didn't scar her for life.  She was the first baby we'd had in our care for many years, and we might have forgotten a few things we learned when our own children were that young. 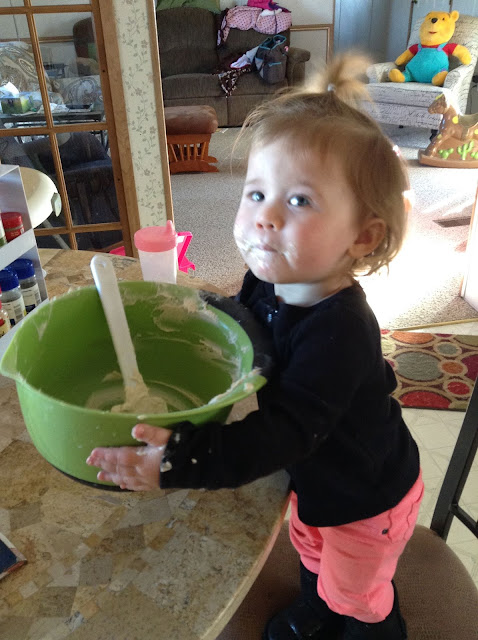 I still remember how much fun I had "licking the bowl" for my mom when she made cookies, cakes, or icing.  I remember watching her in the kitchen as she worked her magic with pies and cakes, although she never enlisted my help much until we moved to the city.  Considering she and my dad were responsible for connecting people on the switchboard so they could have conversations throughout the daylight hours, she never knew when she'd have to run to the switchboard.  Daddy often handled the switchboard at times when Mother was canning and cooking meals, although some people (of the female gender) preferred a woman taking care of their calls and grumbled a little when a man became "Central".

Daddy made the garden and tended it, and Mother canned the produce he raised.  My dad also got kernels off ears of popcorn, shelled peas, and broke green beans on long summer evenings.  When there were high winds from a storm, sometimes telephone lines would get "crossed" and daddy would have to go out with a pole to uncross the wires; otherwise, people would hear folks talking on somebody else's line and couldn't hear their own calls.  I often rode along with him to uncross lines; Mother did all the driving when we all went someplace; Daddy hated to drive, so it seemed strange when it was just me and him in the car.  If my memory isn't tricking me, I believe I felt a little nervous with my dad at the wheel.

When we lived in Eagleville, 1953 to 1956, I think it was, Daddy spent considerable time across the road gabbing with the guys at a filling station.  He still smoked during most of our time in north Missouri; he rolled his own cigarettes, and often lit one cigarette off the last one he was smoking.  He was a certified chain smoker, for sure.  As a kid, laying in my bed upstairs, I would hear Daddy coughing for quite awhile after he went to bed, every single night.  I didn't think anything about it at the time, but looking back, I'm amazed that he was able to finally quit smoking.  My parents listened to some radio programs in the evenings... we didn't have a television until 1956, after we moved to Kansas City... and one of the sponsors was peddling pills that would supposedly help a person stop smoking.  Mother sent off for a package of the pills, but when they arrived, Daddy was mad that she bought them and told her, "If I'm going to quit smoking, I'll do it without the pills."  And he did, but life was pretty hard for awhile.  Man, was he ever a grouch!  He chewed gum and sucked on hard candy and ate so much, he gained 20 pounds or more.  He did die of lung cancer eventually, but he was in his 70's when that happened.

What I liked about my dad spending time at the station was that he carried change in his pockets.  If I ask Mother for a nickel or dime for candy or pop, I didn't always get it.  But if I walked to the other side of 69 highway to the station and asked my dad, in front of two or three other men, for a nickel, dime, or even a quarter, I was almost sure to be rewarded.

As you can see, once I get lost in my memories, I can usually come up with something for a blog entry. 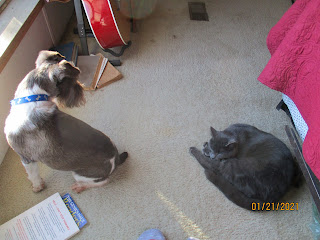 I came to my she-room to finish this blog entry.  Here you see my two inspirational boys who didn't want me to be alone:  One is quite happy to rest in my presence; the other one just wants somebody to go outside with him, sooner rather than later.  Never mind the clutter you see around them, tattered old hymnbooks and a book about meditation that I may never get back to... but I might.  And there's my guitar, just waiting for me to get creative.   Oh, the possibilities!