All my grandchildren are grown.  Those of them who wanted children have them.  The two who have never wanted kids have none, although my oldest granddaughter does have two Shih Tzu dogs, and loves them as though they were her babies.  She always brings her "children" along when she comes to visit; even Gabe likes the dogs, as long as he doesn't catch me petting them.  Amber and her brood came to visit yesterday, so I took a couple of pictures for my dog-loving friends.  The puppy (oh dear, I've forgotten my own grand-dog's name) was impossible to photograph, but I took a picture of Gabe and his guests that shows how tiny the new addition is. 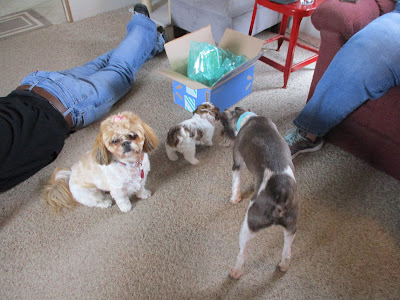 Never mind my grandson laying on the floor trying to take a nap.  No wonder he's in the floor:  He fasts every other day.  He's lost 50 or 60 pounds on that routine, so it does work; I wouldn't be able to do it, myself.  Life is too short for that, from my perspective.  His dad, our son, has lost a lot of weight in the same manner.  But I digress. 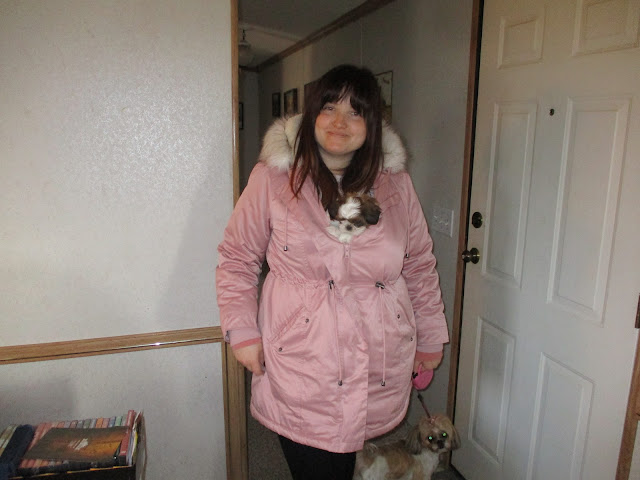 Look closely; that's the new puppy's face sticking out of the granddaughter's coat.

Granddaughter also brought her mother along.  They were on a mission:  They wanted pancakes and even brought a pound of sausage to go with them.

Both Amber and her mother swear I make the best pancakes in the world.  One time Amber was raving about them and I said, "Pancakes are the easiest thing in the world to make.  What makes mine better?"  She and her mother, my ex-daughter-in-law, don't have an answer to that.  They just know.  I used to buy pancake mix, but these days Cliff and I don't have pancakes often, so I make them from scratch.  No matter which method I use, they always tell me mine are the best in the world.

I've gone over it in my mind, the steps in making pancakes.  If the batter is a little thicker, sometimes the minute I pour it onto the griddle, I'll quickly level it with the bottom of my spoon before it has time to start cooking, so it won't be raw in the middle.  I've seen people who take the spatula and smash the pancake after they've turned it over, but that only tells me they have no common sense and don't understand how leavening works.  Oh, and I don't flip the pancake the first time until the batter on top is nice and bubbly.

A couple days ago, as I thought about pancakes, I realized it's no wonder I'm a pro.  I've been making them since I was about ten years old.  When I was growing up, we didn't have pancakes often, so they were a real treat for me.  I watched my mother cook all the time, but she never really encouraged me to cook much.  You know how it is with kids:  You ask them to help cook, and it takes three times as long to cook anything with them underfoot.  I remember her asking me to stir the gravy sometimes, and there was one time she declared I needed to learn to bake a cake; I don't know who gave her that idea.  She didn't own an electric mixer, and I still recall having to beat the batter 300 strokes; I had to keep switching hands to get it done, my arms got so tired.  It was a sour cream chocolate cake, made from scratch.  Unfortunately, when it was finished, we found out I'd used salt instead of sugar.  Even Mother's hens wouldn't eat it.

But pancakes?  I taught myself to make them.  I was in the third grade when we moved from Iowa to the switchboard house in Eagleville, Missouri.  I walked to school, which was maybe three or four blocks from where we lived.  Up until that time, I'd only attended a one-room schoolhouse out in the country.

At Eagleville, there was a hot lunch if you wanted it, but I never did.  I took a sack lunch from home and ate it at my desk while the others went to the lunch room.  (I've told you I've always been weird).  Mother gave me a quarter for lunch sometimes, but I usually walked up to to a diner on 69 highway and bought a hot dog, a coke, and a Three Musketeers.  Yes, all of that for a quarter.

There came a day I realized I had time to walk home for lunch and make myself some pancakes.  I'd been reading the instructions on the box of Aunt Jemima Pancake Mix, and it seemed pretty simple to me.  The directions explained how to tell when the pancake was ready to turn, and I soon learned to fiddle with the heat until it was just right.  My mother, of course, was at home, because when you lived in the phone company's house with a switchboard in the corner of the living room, someone had to be there, every minute of every day and night.  That was how we lived until I was twelve, and modern telephone service closed the place.  But you know, when I think about making those pancakes, I don't even remember talking to my mother as I cooked, and then ate, my pancakes.  It's like she wasn't even around.

I've always sort of lived my life in my head, as though it were a story I was writing, with myself as the main character.  John Prine mentioned that sort of life in more than one of his songs.

The lonesome friends of science sayThe world will end most any dayWell, if it does, then that's okay'Cause I don't live here anywayI live down deep inside my headWell, long ago I made my bedI get my mail in TennesseeMy wife, my dog, my kids and me

But enough of my memories.  Apparently the reason my pancakes are pretty decent is that I carefully followed the recipe on that Aunt Jemima box when I was ten years old.  And that's about only thing, other than Chef Boyardee box mixes, that I ever cooked until I got an apartment and lived by myself in Kansas City.

No wonder I don't care much for pancakes any more.

P.S.  As soon as Cliff wakes up, he usually proofreads any blog entry I've done  in the early morning while he's still asleep.  Today he got done reading this and said, "Now I'm hungry for pancakes."  Because it was noon yesterday when everybody was eating pancakes, he ate chili while the others ate pancakes.  I might have known that would come back to haunt me.